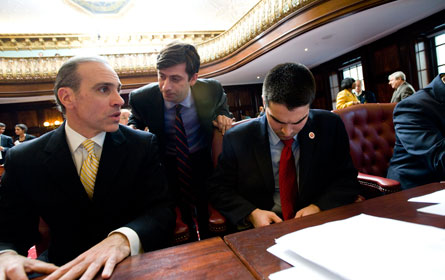 First your heat is turned off. Then the leaks start. Mold is growing and harmful lead paint begins to peel. Countless calls to the landlord go unreturned, because the management stopped paying bills months ago — the building is facing foreclosure and soon, an even-more anonymous bank will own the building.

With hundreds of residential building facing foreclosures each year, these conditions are not uncommon; they are also exactly what a new City Council bill hopes to prevent.

The bill, 501-A, will require banks to notify the Department of Housing Preservation and Development (HPD) fifteen days before a foreclosure action is taken on a residential building. This will allow the HPD to help keep buildings up to code and ensure the building’s sale to new, responsible buyers.

The bill will press banks to take more responsibility for the fact that the assets they seize still have tenants living in them, Quinn said; “you lent the money, you own the building.”

Keeping the Roaches Out

With a nod to the New York Daily News investigation that found limited city efforts to crack down on illegal conversions, Council Speaker Christine Quinn said she hopes the new bill will prevent those conversions from ever happening by allowing the HPD to work with banks to vet out corrupt buyers from buying distressed properties from the banks.

“Slum lords exist on the belief that no one is watching,” Quinn said yesterday. “They’re a little bit like roaches, when the microscope is on them they run away.”

The bill will require the HPD to update their website quarterly with the number of foreclosure actions that exist in each community district. For buildings with twenty or more units, the HPD must list basic building information on the site so tenants and neighbors can be informed of foreclosure activities. This data will also help city officials to monitor struggling areas.

The bill is the latest passed legislation that Quinn proposed in her 2011 State of the City address, coming just two weeks after the Fair Parking Legislative Package, which was a major goal of last year’s speech. Quinn’s State of the City for 2012 is scheduled for next week.

Another promise from the 2011 address was to more aggressively monitor city contracting; following on December’s Outsourcing Accountability Act, the Council passed a Contract Transparency Bill today, which requires the city to create an online database of the cities 15,000 contracts (which costs the city $10 billion a year) with information on the money spent, the contractors, and the contract details in plain English.

This bill aims to combat costly confusions, like the one that occurred over whether the city or a contractor was supposed to shovel the snow around bus shelters. Councilman Domenic Recchia, Jr. read one 1500-page contract only to find that an outside company was contractually obligated to remove the snow around bus shelters — something the Sanitation Department was spending hundreds of thousands of dollars to do.

“Faced with the current fiscal reality and a ballooning contract budget, it’s imperative to know how each and every City dollar is spent,” Quinn said. “That way, both the Council and the public can see exactly where our money is going and where we can cut back.”

â€¨The database will be partially available on July 1st 2012 and fully completed by the same date in 2013.