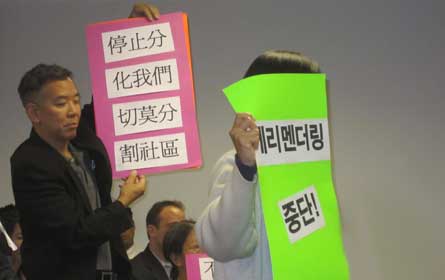 Photo by Gail Robinson
At a redistricting hearing in Manhattan earlier this fall. Asians called for the new boundaries to reflect their growing presence in the city.

Ten years ago, there was not a single elected official of Asian descent in the entire state of New York. But since then, Asian Americans, more than 1 million of whom now reside in the state, have made great strides in New York politics. They currently occupy one seat in the State Assembly, two seats in New York City Council and the office of New York City comptroller.

Much of this happened thanks to the rapidly growing Asian American population and their greater participation in voting. But there is another important factor: redistricting.

John Liu, the first Asian American elected to the City Council and who now holds the comptroller's office, owed his success partly to the redistricting efforts in 2001, when his district in Queens was redrawn to include downtown Flushing, Murray Hill and Queensboro Hill. The redistricting left out Corona, Bayside and Douglaston, where the percentage of Asian voters is lower.

Ten years later, with another redistricting process underway, immigrant communities throughout the city are weighing in on the process, hoping the new boundaries reflect the true face of New York.

Redistricting is a political process that occurs every 10 years. The electoral districts get redrawn based on the population change in the latest census. This affects elections at all levels, from school board, city council, state assembly, to the U.S. House of Representatives. The federal Voting Rights Act requires that the new boundaries be drawn in a manner that provides minority communities with opportunities to elect representatives of their choice.

Based on the 2010 U.S. census results, the 435 congressional seats will be re-apportioned according to population shifts among the states. New York will lose two seats, from 29 down to 27. Texas will gain four seats, while Midwestern states like Michigan, Iowa, Illinois and Ohio will each lose one seat.

At the state and city levels, boundaries will be redrawn to reflect changing demographics. Currently the redistricting effort is led by the New York State Legislative Task Force on Demographic Research and Reapportionment, which is comprised of four legislators and two non-legislators. Gov. Andrew Cuomo and a number of good government groups want the process to be more independent of the legislature. So far, though, they have not succeeded in changing the existing system. At the same time, though, several civic groups are calling for keeping communities of shared interests and backgrounds in the same districts so they can elect candidates who best represent them.

However they are drawn, the proposed districts must be approved by the state legislature and the governor. Meanwhile, the districts in three counties of New York City -- the Bronx, Kings and New York -- are subject to additional review and approval by the U.S. Justice Department's Civil Rights Division.

Some other rules also apply. Districts must be compact and no more than twice as long as they are wide. A district has to be contiguous, meaning that all of its parts much touch or be connected by a bridge or tunnel. If a district covers two boroughs, no other district may cover the same two boroughs.

The current redistricting effort is focused on congressional, State Assembly and State Senate elections in 2012. According to the New York State Constitution, the number of state assembly districts will remain 150. Last time around to avoid losing a GOP seat, the state added one seat to the Senate, bringing it to 62 members. Reports have surfaced that Republicans might try to add another seat â€“ the 63rd â€“ in this redistricting. The redistricting for the 2013 city council elections will start later this year.

Whatever the exact boundaries of the new districts, Asian American activists want them to reflect the growing Asian presence in the city and the state.

Rachana Shah, the redistricting campaign director at Taking Our Seat, a South Asian civic group, said the significant increase in the South Asian population in the city is the driving force behind her organization.

"We did the data work ourselves," said Shah. "There are 351,000 South Asian Americans in New York City, which is a 51 percent increase. And 60 percent of them live in Queens."

"There are areas where the communities have common interests and needs that need to be served, and currently they are not," said Shah. "A lot of it is the funding for organizations that serve the communities. It is often how the elected officials are able to help the organizations that help the communities." Shah was referring to funding opportunities like Community Development Block Grants, which can be directed to community groups based on local elected officials' discretion, and direct funding from the City Council and other government agencies.

Noting that there is no elected official of South Asian descent in New York state, Shah said that her organization is focusing on four areas with large South Asian communities in Queens: Richmond Hill and South Ozone Park, Briarwood and Jamaica Hill, Jackson and Elmhurst, and Bellerose and Floral Park. Currently these neighborhoods are cut up in pieces and divided among several districts.

"Redistricting is not just for immigrant communities, but for communities all over New York City and the state," said Shah. "It's about finding where those natural boundaries and keeping those people with similar interests together. â€¦ When a community is larger within the electoral district, they are going to get more attention."

James Hong, a spokesperson for ACCORD, said that redistricting has to ensure that voices in the Asian American communities are heard.

"It is a chicken-and-egg thing," said Hong. "If the district is drawn well, then you see candidates that reflect the interests of the community. But before you get there, you need to have the district redrawn. â€¦ The place to begin is redistricting."

When it comes to the State Assembly districts, Hong said that while downtown Flushing has been kept as a whole, Bayside, home to increasing Korean and Chinese American populations, is split into several districts.

In Brooklyn, Chinese Americans are concentrated in Bensonhurst, Sunset Park and Bay Ridge, which are close to one another but split into several electoral districts. The borough has experienced a rapid boom in Asian populations, with a 70 percent growth in Sunset Park and 40 percent overall.

In Manhattan, ACCORD proposed that that Chinatown should be separated from Tribeca and Battery Park City since the residents have different socioeconomic backgrounds. Instead, Chinatown should join the Lower East Side because the two communities share similar economic characteristics if not ethnic backgrounds.

Meanwhile, other civic groups have proposed a map for the 2012 state legislative elections. Calling it a "unity map," the groups say their plan would ensure that new districts reflect the demographic changes of their communities.

The Center for Law and Social Justice, based at Medgar Evers College of the City University of New York in Brooklyn, developed the maps with LatinoJustice PRLDEF, Asian American Legal Defense and Education Fund and the National Institute for Latino Politics.

"What we are trying to do here is shared power. There is enough for everyone," said Esmeralda Simmons, executive director of the center. "People know that Flatbush, East Flatbush and now even Canarsie have huge Caribbean immigrant communities. Our task is to go where the people are and see where the populations have commonalities and make sure those commonalities are protected."

Even though the black population in New York City is decreasing, Simmons said there are increasing influxes of black immigrants from Jamaica, Trinidad, Senegal and Haiti in Brooklyn, and other parts of the city. She said transportation is among the biggest community-wide concerns.

"Not so long ago, there was a proposal to eliminate the Franklin Avenue shuttle," she said Simmons, referring to the subway that connects between the A, 2, 3, 4, 5, B and Q lines, providing important links between several heavily Caribbean neighborhoods. "And everybody -- the African immigrants going to the mosque on Bedford Avenue, the African Americans in Prospect Heights and Crown Heights, the Caribbean immigrants all along Franklin Avenue -- all gathered together and made sure that that didn't happen."

"Redistricting means change. Things have to move," said Simmons. "Human instinct to change is to resist. Change happens. You have to go with the population."

Simmons said the proposed map will be revised based on additional comments from community members and elected officials. Meanwhile, LATFOR will come up with its own version later this year and hold another round of public hearings before finalizing its plan.