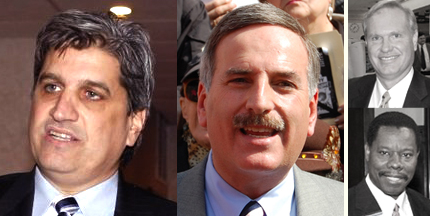 The chart accompanying this story did not include Councilmember Melissa Mark Viverito when first published. It was updated on July 14.

The city's "cultural czar" can now take his throne as the king of capital funding at the City Council.

More than $23 million of the council's capital items were solely sponsored by Councilmember Domenic Recchia, who chairs the Cultural Affairs Committee. Approximately $17.6 million of Recchia's funding goes to citywide or other cultural projects outside his Brooklyn district.

Unlike the council's discretionary expense funding for programs, which provides a minimum of $340,419 to each councilmember annually, the council's capital funding is doled out entirely at the discretion of the speaker's office. At nearly double the size of the council's discretionary expense funding, capital funding goes only to projects like renovations, building acquisition or new equipment. It is also a far more convoluted and complicated funding process with projects that span years and, sometimes, never even get started.

For a complete listing of who got what, click here

It also receives far less attention then the council's scandal-ridden discretionary expense funding, which has been the subject of several reform measures.

An analysis by Gotham Gazette of the City Council's capital and expense discretionary funding found the council's $505 million worth of capital funding for fiscal year 2009 is doled out with less equality -- capital king, Recchia, got more than 10 times as much funding as Councilmember Tony Avella, who placed at the bottom of our list.

Similar to its expense funding, members who chair influential or budget-oriented committees or have leadership positions are more likely to garner the bulk of city funding. While the distribution of funding can be based on need, some say it's really politics at play.

As part of a transparency initiative from Council Speaker Christine Quinn, the City Council capital budget for the first time lists each project with the council members who sponsored it.

The capital budget contains more than 1,000 projects, most involving school construction or equipment acquisition, like technology upgrades or funding for a new auditorium or dance studio. A large portion of the funding goes to parks and public housing, such as security upgrades, as well as libraries. This year, about $140 million was allocated for projects in private buildings -- mostly to nonprofits looking to renovate or acquire new space (for more on that, click here).

The council's discretionary expense funding, which went through a far more stringent vetting process this year than ever before, goes almost solely to community groups and nonprofits for programs, not property or equipment. Under the council's latest reforms, groups most undergo more intense scrutiny from its finance department, the mayor's Office of Contract Services and register with the state attorney general's office.

The status of these reviews are available in a council budget document -- known as Schedule C. Every councilmember receives at least $151,714 in funding for programs under the Department of Youth and Community Development, $108,705 for programs within the Department for the Aging and another $80,000 to allocate as he or she sees fit.

For capital funding, council members typically create lists of potential projects in their districts, prioritize them and deliver their selections to the speaker's office for consideration.

A project's inclusion in the council budget does not guarantee it will be funded. Capital projects must undergo an intensive application process with the agency overseeing the construction or land acquisition. For example, a nonprofit looking to acquire space in Williamsburg for industrial use would need to get the OK from the council, and then work closely with the city's Economic Development Corporation, providing a step-by-step breakdown of the progress of the project. A nonprofit that receives capital funding does not get reimbursed from the city until the project is complete.

While the processes for getting capital and expense funding differ, some argue that council members use both types of funding to gain political clout in their districts and beyond.

Inside City Hall, some members and council insiders say funding is given out depending on a member's relationship with the speaker and as a political tactic.

As it did last year, Gotham Gazette has analyzed the council's expense funding and found that, similar to capital funding, members of the council's leadership are more likely to get cash than other members. We are now focused on capital funding, because this is the first time the council lists which member is responsible for what projects.

Our figures contain only individually sponsored items, so projects or programs that were funded by a borough delegation or more than one member were not included in our tallies. Therefore the analysis cannot be taken as the entire picture of capital or expense discretionary funding. Check out our full list here.

* Funding labeled speaker is allocated by the speaker, with advice from the council body, and given for larger, citywide initiatives.

Clearly leadership helps when it comes to getting funding, whether it's capital or expense.

"I think there is a recognition of seniority and a recognition of council people in the leadership," said Councilmember James Vacca, who is serving his first term and received about $7.4 million of capital funding. "I don't consider that unfair. I think most legislative bodies do it based on leadership."

Others say the numbers can be deceiving. For instance, Recchia may have garnered the most amount of funding at $23.5 million, but nearly three-quarters of that goes beyond his Coney Island district. Recchia funds several groups based on Broadway -- a so-called condition of being the chair of the council's cultural committee.

Recchia did not return phone calls for comment on this story.

Councilmember David Weprin, who received the most expense funding last year according to our analysis, got more than $18 million worth of capital dollars. That sum, however, was bolstered considerably by a $12.5 million appropriation to the High Line -- an elevated park project in Chelsea miles from his Queens district.

This was not the case for others in our top 10.

Councilmember Larry Seabrook, whose expense and capital spending has been under scrutiny in the press, received $8.55 million in capital funding, all of which went to public housing projects or schools in his Bronx district. Seabrook did not return phone calls for comment.

On average, a councilmember received about $6.1 million in individual capital items.

Some, however, were far below that. Councilmember Charles Barron, who is often at odds with the speaker, received $2.27 million in capital dollars. Barron said his lack of funding could be attributed to his less than favorable relationship with the speaker's office.

"I'm not their favorite son," said Barron. "I speak out and speak my mind. When you do that you're not going to be up on the speaker's list."

Barron said he plans on introducing legislation this year that would mandate all members receive the same amount of discretionary dollars, including capital and expense funding, or that it's distributed by need. "It should be based on a formula on a needs basis. It should be the East New York's, the South Bronx, Brownsville," the councilman added, referring to the city's more impoverished areas.

Some of those areas did make our top 10 list, like East Harlem, which is within Inez Dickens' district and the Rockaways, James Sanders' district.

A council spokesperson said capital funding is not allocated by an exact formula, but is given out based on a number of circumstances, including need and the number of requests.

One's relationship with the speaker may not be the only reason why some acquire less discretionary funding than others.

Councilmember Daniel Garodnick is seen as a rising star at City Hall. He lands the so-called necessary endorsements, and his name is often floated as the next City Council speaker.

But when it comes to capital funding, he lost out.

Garodnick was fourth from the bottom in our capital funding analysis. Though some might say rightly so (he represents parts of the Upper East Side, which is the district with the highest median income). Garodnick said he was satisfied with what he received in discretionary funds.

"I thought we were able to satisfy the needs of the district with the funds we requested and the funds that were allocated," said Garodnick. "We wanted to recognize we were in tough budgetary times."

Others attribute their ability to bring home the bacon with how well they do or don't do their jobs. Councilmember Lewis Fidler, also the council's assistant majority leader, received the most expense discretionary funding at $985,000, and snagged a considerable amount of capital too. Fidler said he gets a serious amount of expense funding because he chairs the Youth Services Committee, which oversees a lot of the programs in the city that would be eligible for these types of grants.

"I am on leadership because I'm an engaged legislator that advocates for the needs I believe in," said Fidler. "Which is also why I am able to put together a pot of properly vetted discretionary items."