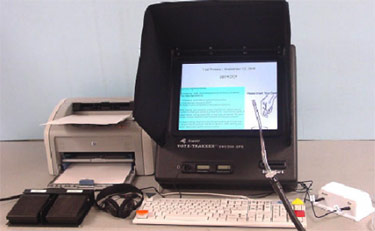 A year ago, disabled New Yorkers welcomed a historic change in voting law that allowed them to exercise a right many New Yorkers take for granted – casting an independent and confidential vote. “This year was one of the first opportunities for many individuals with disabilities to utilize voting technology to exercise an independent and private ballot,” said Matthew Sapolin, commissioner of the Mayor’s Office for People with Disabilitiesand former co-executive of the Queens Independent Living Center after the 2006 election.

The changes, implemented for last year’s primary and general elections, let people vote using new “ballot marking” voting devices at special poll locations across the city. These same devices will probably be used for at least the next few elections. But while many in the disabled community hailed the use of ballot marking devices last year, they are not pleased that what was intended to be an interim solution now might be in place for the foreseeable future. In particular they are concerned that the law only requires one such device per county and that traveling to it can be time consuming and difficult.

So far, though, New York has been unable to meet HAVA’s requirements. In recognition of that, Governor Eliot Spitzer recently signed into law an extension of a September 1, 2007 deadline to begin using new machines. The new legislationwill allow New York State to continue to use its old-fashioned lever machines until a new voting system is implemented. It will also once again require that the Boards of Elections across the state provide disabled voters with the opportunity to use interim voting technology – ballot marking devices – to vote independently and privately.

Historically, voting systems across the nation have not allowed disabled citizens to vote without the aid of a poll worker, friend or family member. In New York, the lever machines that have been in use since 1892, in one form or another, have not provided full accessibility for disabled voters.

Under HAVA, passed in response to the problems that plagued the 2000 elections, states are required to provide new voting technology that would allow disabled voters to vote much like voters who are not disabled. Ballot marking devices are one technology that helps accomplish this goal.

Ballot marking devices are most often used with paper ballot optical scan voting systems, and are equipped with various functions and capacities, such as audio recordings of the ballot, compatibility with sip and puff devices, rocker paddles with foot controls, large font displays and voice activated, voice output technology, to allow disabled voters to cast their own votes without assistance. For New York’s 3 million peopleliving with disabilities, this technology can be revolutionary.

The device acts as a “computerized marking pen” which produces a marked paper ballot. These ballots can be dropped in a ballot box and counted by hand or be cast using an optical scan machine. It is guarded from onlookers by a “privacy sleeve” as it travels from the ballot marking device to the box or scanner at the poll site.

In 2006, after the U.S. Department of Justice sued New York State for non-compliance with HAVA, the state implemented what is referred to as “Plan B” to partially comply with the disability requirements of HAVA. Every county in New York State — or borough in New York City — was required to establish at least one polling location with ballot marking devices in time for the 2006 primary elections.

As a result, the 2006 election marked the first time many disabled voters had the opportunity to vote privately and without assistance in New York State.

That year, the New York City Board of Elections set up five “super poll sites” - one in each of the Board of Election borough offices - that would include these machines. At an estimated $4,500 apiece, New York City purchased 22 Avante Vote Trakker devicesâ€“ five each for Manhattan, Queens, and Brooklyn, four in the Bronx and three on Staten Island.

The city Board of Elections reported that during the 2006 primary election 580 people voted using a ballot marking device. For the general election, the number increased to 1,201. Based on accessibility exit polls, the large majority of these voters were not disabled, but simply used the equipment because it was convenient.

Several advocacy groups attributed the perceived low turnout among the disabled to the location of the machines. They also said the city Board of Elections did not adequately alert the disabled community about the devices.

While Commissioner Sapolin may have been speaking for many disabled voters when he said he was thrilled that ballot marking devices provided him with his “first opportunity to cast an independent ballot,” disability advocacy groups have been critical of the plan. They were less than thrilled that elections officials used borough offices as super poll sites, instead of fanning out the 22 ballot marking devices to more convenient locations across the city. Borough offices, advocates argue, while convenient for the board staff, are inconvenient and even inaccessible for many disabled voters.

An informal analysis shows that of the five Board of Elections borough offices, only one, Brooklyn, is near a handicap accessible subway station. “The main problem is the amount of travel involved, the lack of understanding of how long it can take a person to get from point A to point B in a neighborhood you don’t know,” commented Aaron Belisle, voter education and access coordinator for the Center for Independence of the Disabled, NY. For voters who live in the far corners of Queens or Brooklyn, getting to a poll station may be more than they bargained for, requiring them to travel long distances on the train and transfer to buses or negotiate transportation through Access-A-Ride. Trips can take up to half a day for some voters.

The map below demonstrates how far a voter would have to travel from Yankee Stadium, one of three handicapped-accessible subway stations where voters can catch a city bus to the Bronx super poll site. 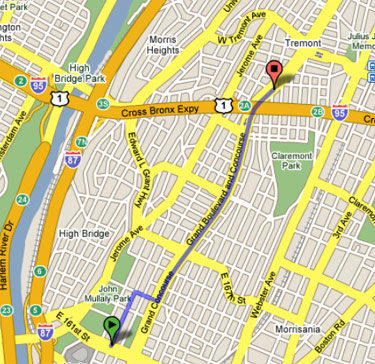 Transportation was not the only barrier. “People were turned off because the process segregated the [disability] vote, you had to go to a separate location while everyone else could go down the block to vote,” said Belisle. “The BOE said there was low turnout, but it wasn’t the result of disinterest by the disabled community.”

The state Board of Election has apparently heard some of these objections. After receiving over 500 public comments, it recently voted down a proposal that would have further segregated the disability vote by only allowing “disabled” people to use the ballot marking devices.

With the uncertainty surrounding the implementation of an entire new voting system, advocates are pushing for a more robust interim plan to meet the needs of the disabled community and live up to the standards outlined in HAVA. While the state mandates one location with ballot marking devices per county, the city Board of Elections can provide more than that. Presently, it has no intentions to expand access beyond the implementation plan of 2006 for the fall 2007 elections, when only a few contests, mostly judgeships, will be on the ballot. According to city board’s director of communications and public affairs, Valerie Vasquez, the board has been having “discussions” on the feasibility of increasing accessibility for the February presidential primaries.

While disability groups, such as CIDNY and New York State Independent Living Council, Inc., as well as civic organizations, such as NYPIRG, Citizens Unionand others would like the board to implement an interim plan providing for accessibility, there is no consensus as to what that plan should be. Some advocates are calling for the purchase of additional ballot marking devices, perhaps one per poll site, as soon as possible. But others question whether the state should buy devices costing $4,500 apiece that could become obsolete once the state and city finally decide what voting technology will replace the lever machines. Nevertheless, the state Board of Elections commissioners agreed this month to prepare a revised HAVA implementation plan, that if accepted by the Department of Justice, will require one fully accessible ballot marking device be available at every poll site by the September 2008 primary.

At the very least, most reform advocates would like the city board to make more effective use of the 22 machines it currently owns. They argue this can be done by spreading the machines out to several locations in each borough, or by making the designated super poll site, more accessible. It could, for example, be placed in a site frequented by disabled voters, such as at Selis Manor, a learning center and meeting place for the blind and visually impaired, in Manhattan.

The board has not ruled out these options, but neither has it warmly embraced them. It said it would cost money to fan the machines out to several locations or even move them to another site. In a telephone conversation, Vasquez said, “We feel it is important to have [super poll sites] in a controlled environment with trained staff while we prepare for full implementation.”

Based on the 2006 elections, it appears the city Board of Election needs to take further steps to ensure that disabled voters know about the sites and are able to get to them. Advocates argue that the board could forge stronger ties with the disability community and service providers and work with the MTA and Access-A-Ride to help get people to the site. The board did do some of this in 2006 with the help of the Voter Assistance Commissionand the Mayor’s Office for People with Disabilities, but many argue that more could be done.

Disability advocates point out that, whatever twists the implementation of HAVA may go through, there are common sense steps the board can take to make voting more accessible for the disabled community. These include such simple measures as making more use of visual materials and reconfiguring tables and other furniture at polling sites so it does not block the path to voting machines. Such simple, cost effective actions could go a long way to ensuring greater poll site access on Election Day.