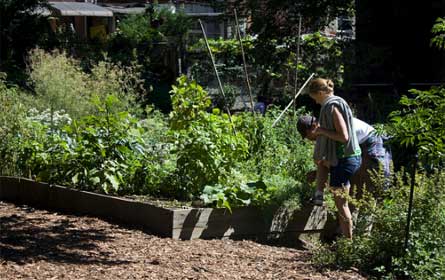 Photo by The Local
Advocates worry that city rules enacted in 2011 could leave some community garden plots open to development.

While New York City adopts increasingly progressive measures to promote sustainability, at least one "green" group remains unsatisfied. Some community gardeners, charging that the most recent city regulations leave them largely unprotected, fear their plots of land could be snatched away at any time.

The rules, though framed as a gift to gardeners when enacted in September 2010, do not permanently protect existing gardens as an earlier agreement did. While 282 gardens remain protected, the Department of Parks and Recreation and the Department of Housing Preservation and Development reserved the right to swap the protected gardens for other similar space. That and other caveats outweigh any theoretical increase in protection, advocates say.

"We all hoped that the rules would say active gardens would be preserved, but they didn't," said Hannah Riseley-White, a community organizer for the nonprofit organization Green Guerillas. "When you read the text, it really says the gardens are protected, unless we want to sell them."

Close to 200 gardens out of around 450 -- a number that doesn’t include Department of Education gardens -- are vulnerable to sale and development under these rules, advocates say. But, more importantly, they believe, all city gardens ultimately remain in jeopardy because none of the legislation they sought made it into the 2010 agreement. Without laws to protect gardens, those who work on them say, nothing is guaranteed.

"Rules and regulations are only as good at the current administration," said Karen Washington, the president of the New York City Community Garden Coalition. "That's not permanency."

The rules governing community gardens have gone through a number of changes in the past 20 years. As community gardens became increasingly popular in the 1980s and '90s, gardeners wanted to preserve their limited growing space, while real-estate developers craved room to expand. In 1999, the Giuliani administration, which had methodically sold garden lots for housing development, put 119 gardens on the auction block in a single day. Nonprofit groups saved some of the gardens by purchasing them, and then-state Attorney General Eliot Spitzer filed suit to halt Giuliani's wholesale development of the green space. In 2002, freshly elected Mayor Michael Bloomberg settled that lawsuit, reaching an agreement with the attorney general to permanently exempt a sizeable batch of gardens from a bricks and concrete fate.

That agreement promised firm, permanent protection to 198 community gardens and preserved about 100 more Department of Education gardens, while designating around 150 gardens for sale and development. The accord provided an armistice to years of battle over the dwindling open space in New York City.

Or perhaps it was only a ceasefire. The rules expired in 2010, prompting the Bloomberg administration to issue new ones. Under these rules, gardens "permanently" protected in 2002 are now subject to "swaps." As a result, around 250 gardens will remain protected for the foreseeable future, but they won’t necessarily occupy the same space they do now. It is the garden that is protected -- not the land it lies on -- so the garden can technically be relocated with the land it once occupied subject to development.

Christopher Amato, who was lead attorney for the state at the time of the 2002 agreement, cautioned at a 2010 public hearing that this approach threatened to create "nomad gardens." Such gardens, he said, could be "forced to move every few years in response to development proposals until, presumably, the gardeners threw up their hands and abandon future gardening efforts."

Amato added that the 2010 rules were “inconsistent with both the letter and the spirit" of the 2002 agreement, as they would "eliminate or substantially weaken several key provisions."

Aresh Javadi, board member for the Community Garden Coalition, agreed. "Working through the attorney general's [2002] agreement," Javadi said, "it was clear that the 198 community gardens named as parks were to be protected permanently."

That is certainly the impression Bloomberg conveyed when he announced the 2002 deal. "We are providing permanent protection to hundreds of community gardens throughout New York City,” he said then, "and establishing a fair process for reviewing future proposals to develop other garden properties."

Now, though, the city has taken a different approach. When the Community Garden Coalition reminded administration officials of the 2002 comments, Javadi said, “They kinda said, in general that’s true but as long as the overall number is the same we can pick and choose what we'll bulldoze."

Javadi added, "With those clauses, they can do whatever they want to anybody."

The administration, for its part, has said that active gardens have nothing to worry about.

"Parks gardens are not available for development unless the garden is in default or inactive," said a representative for the parks department, who added that no gardens have yet been defaulted.

However the representative added, "Parks community gardens and [those under the Department of Housing Preservation and Development] have slightly different rules. ... Parks licenses gardens for four years while HPD's is only for one year." According to the housing department, it has jurisdiction over 26 gardens.

The fate of one Brooklyn garden highlights the dilemma inherent in the swaps.

Hart to Hart garden sits four blocks north of Tompkins Park in Bedford-Stuyvesant, a quarter block of grass enclosed by a linked fence. It grows mostly herbs and vegetables, and offers composting to its members. Its membership tripled in 2009, according to Green Thumb, the city program that manages, but doesn’t own, community gardens in the five boroughs.

When the city realized that Hart to Hart, though thriving, was one of the 150 gardens assigned to the housing department under the 2002 deal and thus vulnerable to future development, the agency decided to swap it with the Warwick Block Association community garden, a parks department lot that was less active. Now, Warwick is no longer a protected garden, even though it was granted permanent status in 2002.

Margot Dorn, the head contact for Hart to Hart, was largely unaware of the swap's logistics. "There were complicated dealings" associated with it, she said, but the city largely handled it without involvement from the gardeners.

The swap means that Hart to Hart will continue to function as it has, and in the same location, but is now classified as a protected parks department garden. Meanwhile, the Warwick garden became a housing department garden. Since those are not protected, the lot could be developed as housing in the future, leaving the Warwick group without a space of its own and, in essence, possibly shutting down one city garden.

"Warwick was an active garden, but the city felt justified doing that swap in order to preserve Hart to Hart," said Riseley-White.

Despite such struggles, community garden advocates say the 2010 rules do offer some policy improvements.

Now, at least, gardens losing their status have some warning. Notification goes to two people affiliated with the garden instead of one, helping to prevent communication snafus. And upon receiving such notification, groups now have 30 days to turn the situation around by proving their lot's viability. If they clean up messy weeds or increase community participation, the gardeners can save their lots.

Also, the new agreement affords some protections to any new gardens that may come in to existence, whereas the old one only applied to those established before the 2002 agreement.

And, says Javadi, the recent disputes have only energized gardening activists. His group is gathering documents that it hopes will prove which gardens are protected, in order to make that information widely available to the public.

"We really need to know exactly which gardens are the permanently protected ones," Javadi said. "Then, if any are impinged upon, we will very, very aggressively go after any agency that wants to hurt the community and its gardens."