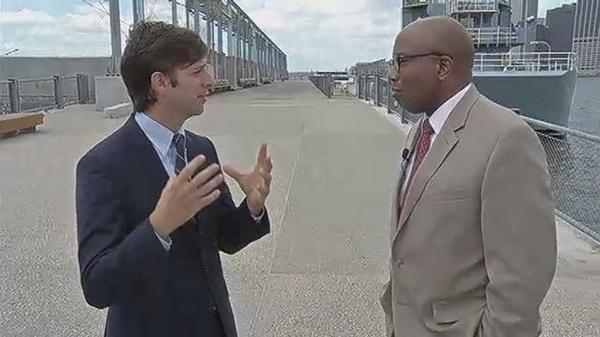 In a small town known more for drugs and teen pregnancy than high school graduation rates, Stephen Levin grew up seeing the problems that he would later work to address on a much larger scale as an advocate and elected official in New York City. Plainfield, New Jersey is a poverty-stricken town of 50,000 where Levin began on a path to where he is now: two-term city council member and chair of one high-profile council issue committee.

Growing up, Levin saw problems faced by those in Plainfield that he now addresses on a daily basis as a council member and as chair of the general welfare committee of the New York City Council. Levin's aunt, Natalie Buzby, worked for Nurse-Family Partnership, a program that assists young, poor mothers by assigning a trained nurse from pregnancy until the child's second birthday. Her work, Levin said in a recent interview with Gotham Gazette, was really what helped him come to a full understanding of the challenges everyday people are trying to overcome.

"When she was done with work, she'd often come over to my house...so I was often hearing the stories of her day," said Levin. "I always used to remember having these significant conversations with her. They really taught me what families are going through and what models are helpful and hurtful."

Soon, Levin's own work in social services began. He spent a good deal of time as a teenager volunteering, he said, and after graduating from Brown University, Levin decided it was time to cross state lines to New York.

In Brooklyn, Levin dove head first into the issues he would later be legislating and holding city council hearings on. He volunteered in Bushwick by running a Lead Safe House program, which relocated families from lead-contaminated homes. Levin also directed an anti-predatory lending program, which used "grassroots outreach and community workshops" to warn of the risks of subprime mortgages.

It was during his work with the Lead Safe House program that he got a first-hand look at the challenges facing poverty-stricken individuals and families in those Brooklyn neighborhoods and saw his path ahead.

"I committed to myself that I would work in the field," Levin said. "If I had the opportunity to run for office, I would, in order to try to make a difference."

In 2009, that opportunity presented itself and Levin ran a winning campaign to be elected to represent the 33rd District in the New York City Council. He then joined the Committee on General Welfare, on which he served during his first four-year term, becoming chair in early 2014 when his second council term began and both council and committee positions reshuffled.

"I had indicated that I cared very deeply about the issues and had the experience of serving on a committee and had a desire to chair it," said Levin of moving into the new role. While Levin continues to mostly fly under the radar compared to other more attention-grabbing colleagues, he has embraced the hefty responsibilities his committee has.

The committee's big name gives indication of its scope: general welfare encompasses many issues and relevant social services; and the committee often works collaboratively with others like those on juvenile justice; health; and women's issues.

"The General Welfare Committee oversees all sorts of services in New York City...that includes three large agencies," Levin said. One such agency is the Department of Homeless Services (DHS), which seeks to prevent homelessness and provide short-term, emergency shelter for individuals and families who have no other housing options available. The city's homelessness crisis has been a major focus of the committee's and of Levin's.

The committee also oversees the Human Resources Administration (HRA), or the Department of Social Services, which oversees Medicaid, public assistance, SNAP benefits, and a number of other social service programs.

Third, Levin explained, is "the Administration of Children Services, commonly referred to as ACS. The ACS includes child protective services, preventive services, foster care and early childhood education. He continued, "In addition, we also spend a lot of time examining how [the departments] work together for the most vulnerable New Yorkers."

"What happened was the Bloomberg Administration and the state discontinued the subsidies entirely," Levin said. "So, for the last three years, we didn't have any subsides in place whatsoever."

The first step toward progress was changing the language in the state budget to allow for more finances to address homelessness, especially through subsidy programs. Levin wants to see more families moved from shelters to permanent housing. His district has not been exempt from the growing number of shelters in the city, including the 2012 opening of the controversial Bowery Residents' Committee shelter for men in Greenpoint.

"I [worked] with the [de Blasio] administration to get the State to change the budget language around providing subsidies for homeless families. It took a lot effort," said Levin. "I went up with folks from HRA and DHS to get the state to change budget language which was previously preventing the city from drawing out its own funds [that could] help...families living in shelters." Levin called the successful shift "a really important component to helping get ourselves out of this homelessness crisis that we find ourselves in right now."

In August, after negotiations with Gov. Andrew Cuomo, the City announced it would create two rent subsidy programs to ease the plight of chronically homeless families with children.

According to Levin, the general welfare committee will soon be addressing a variety of other issues related to social services, including reevaluating the HRA employment program and adult protective services. The committee will also put the Early Learn program under the microscope, he said.

Critics of the Bloomberg program were livid when the City cut the number of children allowed in City child care services and Head Start programs from 50,000 to 43,000.

Since Levin became chair, the committee has held meetings to address the need for better data collection about youth in foster care; including on those aging out of the system, obtaining government-issued identification, and graduating from high school. At the committee's September 8 meeting, bills to these ends were passed and will be sent to the full Council for votes.

Levin has had a busy first nine months as chair, but his work has only just begun. With the homelessness crisis, a huge population of New Yorkers living in poverty, and social services stretched thin, the general welfare committee and its chair will continue to have much to tackle. The committee is next scheduled to meet on September 29.