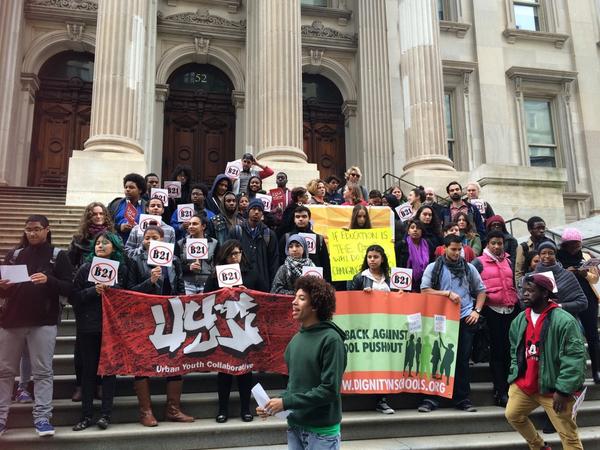 Rally on the steps of Tweed (photo: @UYC_YouthPower)

Annual revisions to the disciplinary policies for New York City public school students are typically put into place before the start of each school year. Students in the midst of the 2014-2015 year, however, continue to wait for an updated version as the new Department of Education administration has stalled on its first revision to the code of conduct.

While advocates say that an announcement is imminent, those seeking a key change to the disciplinary code continue to put public and private pressure on officials.

Last week, the Urban Youth Collaborative (UYC) led another rally to call more attention to the barriers they say are created by one especially controversial element of the disciplinary rules. Many students, teachers, and advocates argue that infraction "B21" must be removed from the new version of the code. They say that enforcement of B21 has raised serious questions and caused a great deal of damage to young people. They ask: at what point does a disciplinary policy become too stringent? And: if a policy is disparately burdening already marginalized students, is the policy not inherently flawed?

According to Kesi Foster, coordinator of UYC, disciplinary code changes are expected within the next several weeks, before the end of the calendar year. UYC has focused intensely on B21, part of the Citywide Standards of Discipline and Intervention Measures, under which students can be suspended for "defying or disobeying the lawful authority."

"Policies like B21 target black and Latino students, students with disabilities, and LGBTQ students. I know not just because of the research, but because I have experienced it," said Markeys Gonzalez, a high school student who spoke of his experience with school disciplinary policies at the rally, which took place on the steps of Tweed Courthouse on Veterans Day and attracted about fifty students, teachers, and advocates.

Gonzalez was suspended for a week under B21 when he refused to take off a "rainbow bracelet" during LGBTQ Pride Week. Gonzalez chose not to divulge the name of his school for fear of being targeted.

Matthew Garcia faced the same punishment when he disobeyed a teacher who wanted him to remove his hat. Alana Cooper was similarly suspended for not eating in the lunchroom, where she felt her personal safety was compromised by bullies. All three students are youth leaders of UYC, an umbrella coalition that organizes for education reform. Recently, UYC has mobilized behind adoption of a comprehensive college preparation program in schools, a movement backed by the City Council last month, and also for reducing the levels of racial segregation in schools.

Now UYC is back to addressing the rate of suspension in schools, which it characterizes as excessive and applied in a discriminatory fashion. In documenting the racial disparities in the number of suspensions, UYC reports, "Of 53,504 suspensions last year, black and Latino students made up 89% of all students suspended. Black students make up only 26% of the student population, but accounted for 53% of all suspensions."

This data echoes a study released by the U.S. Department of Education in March, indicating that the racial disparity begins in preschool nationwide. Research has also revealed a correlation between student suspension and the chance of dropping out, in addition to impeding academic engagement. The Civil Rights Project reports that "being suspended even once in ninth grade is associated with a 32% risk for dropping out, double that for those receiving no suspensions."

The pushout that results from policies like B21 is said to drive the school-to-prison pipeline; students being pushed out of school by punitive measures can make them more vulnerable to becoming ensnared in the criminal justice system. Since some schools have zero tolerance policies that directly involve police officers, minor in-school incidents can lead to arrests. The growth in police presence in schools has been partially attributed to the rise in school shootings since the eighties.

During the mayoralty of Michael Bloomberg, the number of annual student suspensions in New York City more than doubled, "from less than 29,000 in 2001 to nearly 70,000 in 2011," according to a report by the New York Civil Liberties Union (NYCLU).

Similar exclusionary practices to infraction code B21 have also been prevalent in cities around the country, but have been on the decline. Last September California Governor Jerry Brown signed a bill banning suspensions for "willful defiance." The bill made California the first to enact a statewide ban on suspensions that involve "defiance" from students, replacing punitive measures with restorative justice practices, which include peer mediation and conflict resolution. Results have been staggering in some places, like school districts in Los Angeles and San Francisco where restorative justice practices were adopted even before the bill was passed. At Garfield High School in Los Angeles, for example, suspensions dropped from over 600 annually to just one suspension over the course of three years, while attendance and graduation rates increased.

Montgomery County Public Schools in Maryland similarly reduced suspensions after formalizing discipline policies in a move toward restorative justice, resulting in a 37 percent drop in suspensions and expulsions in the last year. Chicago Public Schools also passed a revised code of conduct last June, stressing remediation instead of suspension. Data revealed that Chicago had more than 50,000 suspensions over the last year, comparable to the 53,504 suspensions in New York City public schools for 2013-2014 (though New York City's student population is much larger).

Amid the calls for changes to disciplinary codes, some point out that the disputed rules may indicate how well a school, as a whole, is serving its students. "Changing the discipline code doesn't get at the root of the problem. High rates of suspension are often a reflection of other problems within a school: disengaged students, strained relationships between teachers and students, a weak or dysfunctional school culture," said Pedro Noguera, the Peter L. Agnew Professor of Education at NYU.

Moreover, some see dysfunctional school culture as a symptom of a larger issue. "Our schools are often a microcosm for the society and communities around them," said Foster of UYC. Foster also notes the correlation between stop-and-frisk activity in the larger society and the rate of suspensions in schools, which was detailed in a report by NYCLU. In East New York, Brownsville, Mott Haven, Jamaica and Harlem—areas with comparatively higher numbers of stop-and-frisks performed by the NYPD—students were most likely to be suspended from school.

Foster said he believes the new administration, led by Mayor Bill de Blasio and schools Chancellor Carmen Fariña, is "prioritizing how to change our approach to school discipline. I think they're engaging advocates...we've identified the policy shifts that have to happen for that to be effective and we hope they follow through." Both the mayor and the chancellor have expressed support for moving away from suspensions and toward restorative justice practices, and there has been action in this direction.

Advocates are not only calling for a complete end of suspensions for "defying or disobeying authority" under infraction code B21; they are also looking to enact a more thorough protocol for guidance interventions, wherein all stakeholders are engaged. Such interventions follow the restorative justice model and include meetings with students and teachers, counseling, mediation, and community circles. A reformed protocol, in the eyes of advocates, may alleviate the concern that rescinding B21 would be a hindrance to teachers who are sometimes required to manage disruptive students.

"We want the education process not to be impeded," said Michael Mulgrew, President of the United Federation of Teachers, when asked by Gotham Gazette what the UFT wants to see in the new disciplinary code, "but we need an approach where if students are acting out, there is a system in place at the school level, dealing with the students' issues on why they're acting out and not impeding the educational process for the rest of the students."