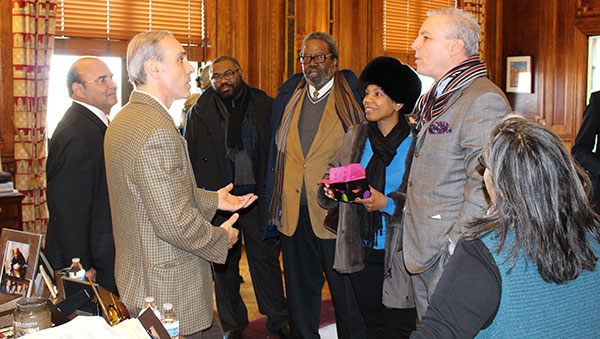 STATEN ISLAND - Borough President James Oddo is on a mission to make local government more relevant to Staten Islanders. Rather than give a speech about his first 13 months on the job and the year ahead, Oddo opened up his office to residents on Sunday afternoon for handshakes, hugs, and information on what borough hall can do for them.

"There's a certain level of apathy that Staten Island has been known for. People just don't want to interact [with government] and we want to change that. We try to change it every day," said Oddo.

So, instead of giving a State of the Borough address, Oddo, a Republican, did something far more interactive: yesterday, he hosted "DIrect Connect Sunday" at Staten Island Borough Hall. It is one indication of Oddo's attempt to focus his borough presidency, now in its second year, on constituent services.

Many of the nearly 350 people who attended had never been past the 109-year-old building's lobby. On Sunday they explored the restored marble halls, looked at New Deal-era murals depicting the island's history, and learned more about the topography department's vault of more than 4,000 maps dating back to the 1700s. The key to the event, though, was the more current information Oddo and his staff were providing: display boards and personnel were on hand to showcase the island's current challenges and how the borough president plans to fix them. Oddo and his delegates were also there to listen.

"This is a big deal, because he doesn't have to do this," said John Healey, an accountant from Oakwood.

Visitors included the island's official NASA ambassador, an American Baptist minister, representatives of the 9/11 Flag Football League, a young boy from the Little Dolphin School, and many more.

Those who knew Oddo as minority leader in the City Council, or member of a local community board before that, said this type of accessibility is normal. The borough president is active on social media and his secretary said he responds to people with handwritten letters.

"He's such a good guy. Nothing he wouldn't do for you," said Mario Rapaglia, owner of Bario's Caterers. Rapaglia recently lost 50 pounds and Oddo excitedly complimented him on his trim jawline.

As borough president, Oddo has been using his gregarious nature to get more people engaged and make them rethink stagnant perceptions about their community. Turning around old feelings of neglect may be difficult, but he claims to be up to the task. A bust of Superman tearing open his dress shirt to go save the day sits on Oddo's wooden conference table and may serve as encouragement.

"We love to wallow in 'the forgotten borough' and we too often highlight the shortcomings that we have," Oddo said of Staten Islanders. "I am more keenly aware of our challenges than anyone, and we have them just like any other community, but we also have lots of great things."

One of Staten Island's biggest challenges is the health of its residents. In addition to some of the city's highest rates of obesity, smoking, cancer, mortality, and heart disease, the island is in the midst of a prescription drug and heroin abuse epidemic. According to Rose Kerr, Oddo's director of education, there are only 12 substance abuse counselors serving the island's 70 schools. Oddo has started many health initiatives, but the problems are too large to be fixed quickly. Kerr said the work needs to start at home.

"The families really need to know that this is a serious issue, whether it's in their backyard or somebody else's," she said.

Despite these issues, Oddo said Staten Islanders have a lot to be proud of. Once completed, Freshkills Park will be three times the size of Central Park and is expected to attract people from far beyond the city. Tech companies have begun scoping out the island for development and the North Shore will soon feature the world's largest ferris wheel, along with a new outlet mall.

Of course, any future waterfront development will be tinged with the bad memories and ongoing recovery from Superstorm Sandy. While Oddo said he's cautiously optimistic about Mayor Bill de Blasio's plans, the rebuilding process is taking far too long. He blames much of this on poor decisions made immediately after the storm and an overly complicated bureaucracy created by the Bloomberg administration.

"The results don't reflect the amount of energy we've all put into it, and until the results do none of us should be thankful or satisfied with anything that's happened," he said.

Though he's one of the few Republicans in local government, Oddo is open to ideas from all sides. He fondly recalls a strong working relationship with former City Council Speaker Christine Quinn, a Democrat, and the books on display in his office include authors ranging from David Plouffe to Rudy Giuliani.

Oddo said he also has strong ties to all of his fellow borough presidents. Inspired by a recent wall ball challenge between Eric Adams and Ruben Diaz Jr., Oddo may soon reignite a sports rivalry of his own. Former Borough Presidents Marty Markowitz, of Brooklyn, and James Molinaro, of Staten Island, used to compete over which of their local baseball teams won more games. The victor got to keep the Borough Cup, a trophy shaped like the Verrazano-Narrows Bridge, for a year. The competition was forgotten, but Oddo may look to start it up again this summer.

Until then, he has more serious matters to handle. Without a congressman, and potentially soon without an Assembly speaker that can bring as much money into the city, Staten Islanders will need more of a voice than ever.

While Oddo wouldn't get any more specific than that, he made it clear that his long term priorities haven't changed.

"Eventually there will be a new speaker and we as Staten Island electeds will have the same mission we had in the previous iterations, and that is to get the rest of government to treat us fairly."