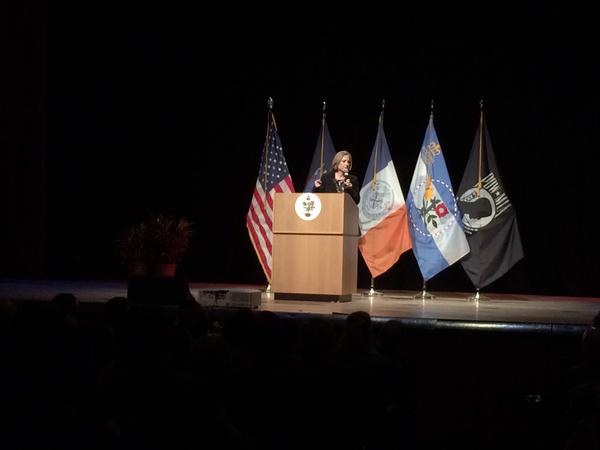 QUEENS - "If it's good for families, it's good for Queens," said Queens Borough President Melinda Katz, repeating the phrase that she said guides her policies at Borough Hall. Katz spoke to a packed Colden Auditorium at Queens College on Thursday, marking her 387th day in office with her first State of the Borough address.

Katz recapped her first year as Queens borough president while expanding on her vision for 2015. Like each of the other borough presidents in New York City, Katz has quite a bit of room for defining the role, which is less powerful than it was a few decades ago, but still allows for quite a bit of creativity, policy-making, and impact.

Among her accomplishments last year, Katz highlighted the overhaul of the Queens Library Board of Trustees after financial impropriety came to light by then CEO Tom Galante. "Sunlight is the best disinfectant," she said at Thursday's speech, reiterating a statement she made on the need for the change in leadership. Katz also discussed being instrumental in the World's Fair Anniversary Committee, which organized cultural events last year to celebrate the 1964 and 1939 World's Fairs. She also worked with the mayor and City Council to raise funds for the renovation of the New York State Pavilion in Flushing Meadows-Corona Park, she said.

For 2015, Katz outlined a big vision. She stressed her theme for the speech, calling Queens "The World's Borough," a moniker recently given added credence by popular travel publication, The Lonely Planet, which named Queens the top travel destination in the United States for 2015. Stepping up to the dais, Katz greeted the audience in a number of languages, including Hindi, Mandarin, French and Spanish.

"Being borough president is more than a job for me. It's a passion," said Katz as she emphasized her strong family connections with the borough and the motivations behind her work, chiefly her young sons who she said keep her grounded.

"My parents believed that Queens held all the elements of any great city and that no one should have to cross a bridge or go through a tunnel to get great arts, culture, fine dining and great neighborhoods," she said, stressing the cultural diversity of the 2.2 million residents of the borough, nearly half of whom were born outside the United States.

Katz's priorities for the new year are nothing short of ambitious. A top item on her list is tackling the overcrowding of schools in Queens, an issue she has brought up before. "We need to get our students out of trailers and into classrooms," she said, referring to temporary trailers set up at numerous overcrowded public schools. She criticized the complicated system of new education standards the state has adopted. "It's not a common core," she said. "It's a common problem." Pre-K was also on the list as she called for volunteer organizations to help with hosting pre-K programs - Queens enrollment is expected to quadruple over the next year.

This year will not be without its challenges, as Katz explained her office will be working on a number of formidable causes, including affordable housing. She urged the New York City Housing Authority (NYCHA) to create 2,500 public housing units in the borough this year, up from the originally proposed 750. She called for increasing emergency rooms in the borough and creation of a permanent Rockaway ferry service. But she also took the time to praise the work of the 700 Queens residents working on local Community Boards, stating her outright opposition to term limits on Community Board members.

Among the lighter moments of the speech was Katz's announcement of an annual Queens Day to celebrate the borough's cultural diversity. Referring to a few travel publications, Katz said, "They all agree that Queens is hot and on the move. Sorry Eric!," a cordial joke aimed at Brooklyn Borough President Eric Adams, who was in attendance.

[This is part of our 'State Of's series wherein we're reporting on so-named speeches by a variety of elected officials, from the President to the Governor, the Mayor, the City Council Speaker, and the Broough Presidents - visit the landing page here]