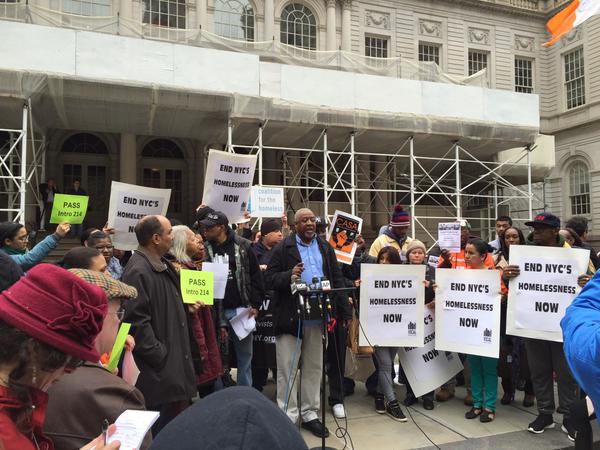 On Friday, tenant advocates, union representatives, and elected officials gathered in two separate meetings to discuss the renewal and strengthening of state rent laws. There is a sense of urgency among city-based legislators and tenant advocates as the laws regulating many thousands of apartments are set to expire in six weeks and legislative debate on the topic is non-existent.

One meeting took place at the United Federation of Teachers (UFT) headquarters in New York City and featured Mayor Bill de Blasio, union heads, and key electeds like Assembly Housing Committee Chair Keith Wright of Harlem. According to numerous sources the meeting was convened by 1199 SEIU, the powerful healthcare workers union, to convince organized labor to join the fight to strengthen the rent laws.

Meanwhile, another group of advocates and legislators met in Yonkers in the office of Assembly Member Shelley Mayer to discuss how to get equity between the city and suburban rent laws and how to mobilize tenants on short notice.

Many legislators and advocates worry that the meetings took place too late in the game. There's just six weeks left in legislative session and the rent laws have been the subject of few negotiations and almost no organized lobbying.

Stakeholders see this year as do or die for strengthening rent laws so that landlords can't remove apartments from rent regulation after making renovations and increasing rent. Advocates say 54,000 apartments have been taken off the roles in the past 10 years - a figure they cite as a net total. Landlords insist the current rules help them maintain apartments and keeps the housing stock from falling into complete disrepair - they do not want to see it become tougher for them to move apartments to market rate.

Meanwhile Senate Republicans are distracted by the corruption investigation into and impending charges against Majority Leader Dean Skelos, and eager to frustrate their nemesis de Blasio, who is seeking renewal of mayoral control of schools and the rent laws before both sunset in June. Tenant advocates are investing all of their hope in new Assembly Speaker Carl Heastie, Democrat of the Bronx, and are demanding he play hardball in negotiations over the renewal of the 421-A tax break that benefits developers and expires at the same time as the rent laws.

Gov. Andrew Cuomo has already downplayed the possibility of useful negotiation in the Legislature. Back from his visit to Cuba, an energized, punchy Cuomo delivered an assessment of the current rent law negotiations to a breakfast of the Association for a Better New York on April 24.

"If it was a different time in Albany, frankly, and Albany was a little bit more of a stable situation I would normally take those negotiations to Albany and try to work it out among the parties," Cuomo said of the housing-related issues. "Albany is somewhat - there's a lot going on right now. So I'm hoping and I'm asking the parties to work out the disagreements among themselves." He then suggested that the situation in Albany might be so dire that a straight extension of both programs, without any tinkering, might be necessary.

That was the last thing tenant advocates wanted to hear. "I thought it was outrageous," said Michael McKee, treasurer of Tenant's PAC. "He was proposing exactly what the real estate industry wants."

McKee was further vexed that no legislators challenged the assertion that Albany is too dysfunctional to negotiate over two essential pieces of legislation."Why was there no blowback?" asked McKee. The influence of the real estate industry in Albany is well-documented, of course.

Advocates plan on turning up the pressure in the coming weeks. Cuomo's Manhattan office will be the center of protest on Wednesday, May 6 at 11 a.m. and New York State Tenants and Neighbors will host a rally in Foley Square at 5 p.m. on May 14. A number of legislators also have tentative plans to make public pushes for strengthening the rent laws.

What do advocates want? They say the city has those 54,000 rent-controlled units over the past 20 years thanks to vacancy decontrol. Current state law allows landlords to increase rents based on improvements they make to a building or individual apartments. Some tenants find their rents increasing without any obvious fixes being made. Landlords can also increase rent by 20 percent once a rent-stabilized tenant leaves. Tenants claim this leads to abuse from landlords who want to increase rent. The Rent Stabilization Association (RSA), which represents landlords, insists that landlords make improvements that are necessary and that without them the housing stock deteriorates.

But that does not mean Ricci is happy with a lack of legislative discussion over the rent laws "There hasn't been a rational healthy debate on the issue for years. It is owners versus tenants. The Assembly gets very wrapped up in representing tenants. They aren't worried about what keeps the housing stock going."

There are differing proposals for how to improve rent control for tenants and it is unlikely any individual bill proposed in the Legislature will become the solution as a bill package will almost certainly be hashed out in secret by Cuomo and the leaders of each house. But a few of the ideas include limiting landlords' ability to increase rent after repairs so that once the repairs are paid off rent would return to a baseline. There is also talk of ending vacancy decontrol and stopping landlords from being able to increase rent by 20 percent once an apartment becomes vacant.

Renewal of the rent laws almost certainly won't happen this year without renewal of 421-A, a tax break for developers that has been under the spotlight lately in part thanks to the indictment of former Assembly Speaker Sheldon Silver, who allegedly used his leverage over the breaks to push developers to hire a law firm which in turn gave him kickbacks. There are also questions about whether 421-A is still necessary as an incentive to spur development in a booming city.

But, the tax break is designed to incentivize developers to include affordable housing in luxury high rises. Tenant advocates say the costs of the break far outweigh the benefit, though: the city lost $1 billion in tax revenue to the exemption in 2014 according to a study by the Municipal Art Society of New York. Advocates estimate that fewer than 16,000 families benefited from the creation of affordable housing under 421-A last year. Some legislators have proposed replacing the program with a housing voucher system so that families would directly benefit.

It is dubious to think that Senate Republicans will let 421-A go when the real estate board, also known as REBNY, and developers are their single largest campaign donors and Senate Republicans don't have a very large wish list for the end of year. Governor Cuomo is also a very large beneficiary of the real estate industry, as are many other Democrats.

Further, some in the real estate industry insist that de Blasio needs 421-A to implement his ambitious city affordable housing plan because he is relying on real estate powers to implement it. His plan calls for the creation over the next decade of 80,000 affordable units, the preservation of 120,000 affordable units, and the development of 160,000 market-rate units.The mayor's office did not issue any details of Friday's meeting and did not respond to request for comment in time for publication.

Activists and legislators say the mayor should simply get behind a new plan that relies on a program replacing 421-A, but with the rent laws expiring in June and Senate Republicans running down the clock it appears unlikely that 421-A is going anywhere.