PHOTOS OF THE WEEK: Brooklyn Borough President Eric Adams and others carry a symbolic casket as part of an anti-violence campaign, via Ross Barkan; Mayor Bill de Blasio and comedian Louis C.K., who was shadowing the mayor for two days, outside City Hall, also via Ross Barkan 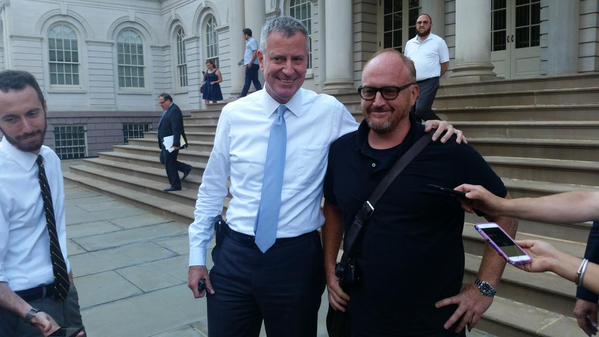 3. Legionnaires’ Outbreak: On Friday, the numbers stood at just over 100 people infected, with ten dead in the most recent outbreak of Legionnaires’ disease, this one in the Bronx. New York City buildings with water-cooling towers have to “assess and disinfect the units within the next two weeks,” under Health Commissioner Dr. Mary Bassett’s new directive. On Thursday Mayor de Blasio said that there would be “substantial action next week, legislatively.”

4. De Blasio Mental Health/Public Safety Initiative: On Thursday Mayor de Blasio announced “NYC Safe,” a $22 million initiative, designed to find and help people with severe mental health issues and violent tendencies. The initiative will combine clinical treatment and law enforcement to intervene before or after violence occurs. The plan is part of a larger “mental health roadmap” that First Lady Chirlane McCray will unveil in September.

5. UFA Contract Agreement: On Thursday the Uniformed Firefighters Association, which covers 8,000 firefighters and FDNY personnel, and the City announced they had reached a tentative contract agreement. The deal includes new disability legislation, a key point of contention in negotiations. According to the administration, 83 percent of the city workforce is now under contract, after the number was zero when de Blasio took office.

MORE FOR THE WEEKEND:
All from a big Thursday evening: