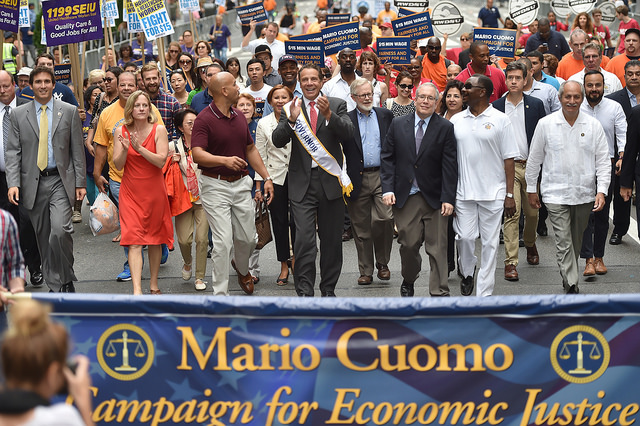 Gov. Cuomo at the Labor Day parade (photo: The Governor's Office via flickr)

On Thursday Governor Andrew Cuomo, joined by Vice President Joe Biden, held a rally to announce a campaign to make New York the first state in the nation with a $15-per-hour minimum wage.

It was a triumphant moment for the governor, and for unions and progressive groups who have worked for the last year to get Cuomo on board with a $15 hourly minimum wage. It is being called a major about-face by many watchers, including some who note that Cuomo now supports a policy his rival, Mayor Bill de Blasio, has been pushing for quite some time and that Cuomo had previously dismissed.

The move, along with other recent Cuomo plays, is in striking contrast to the Cuomo of last spring, who some confidants and legislators describe as aimless, distracted, and maybe a little bit bored.

Now, though, any such perception has dissipated, perhaps in large part thanks to de Blasio's exasperated June tirade against the governor, which came at the end of this year's legislative session. Harsh, damning words from the mayor may have been the challenge Cuomo needed in order to reinvigorate.

De Blasio pulled no punches, boldly saying Cuomo had made promises he didn't intend to keep, is vindictive, and backed policies that were harmful to New York City. "And what I believe here is the governor worked with the Senate in some cases to inhibit the work of the Assembly, to inhibit the agenda that New York City put forward," de Blasio told NY1 anchor Errol Louis in a June interview, before sitting down with City Hall reporters to reiterate his message.

Cuomo had used de Blasio as a punching bag for months before de Blasio's explosion, even apparently giving publications blind quotes attacking the mayor. But with the feud spilling out into the open, observers say Cuomo was freed in a way, even given a gift--a political opponent to war with in the open.

The mayor's declaration of war was something pundits and sources close to the Cuomo administration say the governor desperately needed. "The governor is at his best when he has someone to duel in the political arena," one Albany insider told Gotham Gazette. "It is also when he is apt to make mistakes, but he comes alive when he is going for the kill."

For some Democrats, de Blasio's tirade was a breath of fresh air - someone, they said, had finally called out the bully. Others, including members of the Cuomo administration saw it much differently. They heard it as the younger brother finally crying "Uncle!" because he had no other means of retaliation.

Sources within the Cuomo administration say they saw de Blasio's "tantrum" as an admission that he had failed at moving his agenda and was giving up any hope of future success in Albany. That appears to have left an opening for Cuomo to reassert himself on progressive issues - like minimum wage - that de Blasio has staked out.

Not very long ago, Cuomo was advocating a plan that would eventually raise the minimum wage to $11.50 in New York City and $10.50 elsewhere in the state. He appeared to scoff at the Assembly's proposal that would have raised the minimum wage across the state to $15 by the end of 2018. "God bless them — shoot for the stars," Cuomo said, dismissively, in March at a stop in Rochester. The governor has repeatedly cited the Republican-controlled state Senate as a place where such progressive proposals go to die.

If Cuomo had made a major announcement on a $15 minimum wage a year ago, it would have appeared as though he had been dragged to the position kicking and screaming by The Working Families Party and de Blasio, who brokered a deal between the two to prevent a WFP-backed primary challenge to Cuomo in the 2014 gubernatorial race.

At the time, Cuomo appeared to agree to back the mayor's proposal to allow the city to raise its minimum wage up to 30 percent higher than the state's (as well as other WFP-backed policies and a Democratic takeover of the state Senate). But this year Cuomo presented his own plan, which did not include giving the city a say over its wage, and was still short of what activists on the left were calling for.

But now, Cuomo has swooped in to champion the $15 wage, albeit on an extended phase-in timeline that would implement $15 per hour in New York City at the end of 2018 and state-wide in the middle of 2021.

Cuomo is notorious for refusing to move on proposals that he won't receive absolute credit for enacting into law. With de Blasio all but slain in Albany after a rough 2015 legislative session, Cuomo was freed to move on minimum wage and other progressive initiatives, knowing he could charge in and pick up the baton that he had knocked out of de Blasio's hands.

Meanwhile, Cuomo enjoys the benefits of being de Blasio's enemy, which boosts his standing with conservatives and moderates (and even some liberals) across the state. Cuomo's favorability ratings dropped to all-time lows this summer, but de Blasio's poll numbers are even lower.

"I'm not buying de Blasio gave him an overarching focus, because clearly the governor used the mayor for a punching bag from the very beginning of the administration, whether it be on the millionaire's tax or charter schools," said Doug Muzzio, professor of political science at Baruch College. "It certainly did exacerbate the relationship and gave Cuomo the opportunity to strike out at a perceived tormentor."

Cuomo and de Blasio have appeared to go out of their way to avoid each other at public events, though they did speak in person at a September 11th commemoration on Friday. Cuomo has either not invited the mayor to several, like his recent solidarity mission to Puerto Rico, or de Blasio has not appeared interested in attending, like for the governor's announcement of a new LaGuardia Airport.

Cuomo has appeared to jab at de Blasio when reporters ask why the two are not meeting at events, which have included several parades. He's also made efforts to strengthen relationships with sometime de Blasio antagonists like Comptroller Scott Stringer and Bronx Borough President Ruben Diaz Jr., and de Blasio ally City Council Speaker Melissa Mark-Viverito.

Last Thursday, Cuomo was honored as "Man of the Year" by the city's largest police union, which is headed by de Blasio nemesis Patrick Lynch. "You deserve to be paid for the job you do," Cuomo told the officers, hinting at their dispute with the city over pay raises. Someone in the back of the room shouted back: "Tell de Blasio!"

Cuomo's feud with de Blasio appears to be helping insulate him from backlash he has faced from police unions for signing an executive order giving the Attorney General the ability to act as special prosecutor in cases where police kill unarmed civilians.

"De Blasio has served as a foil for the governor with some groups," said Muzzio. "This conflict certainly enhances his influence with certain interests, especially with the Republican-controlled Senate."

Cuomo's moves on progressive issues may risk some of his goodwill with Republicans, but nevertheless, the governor has shown a renewed sense of urgency. It is energy that Cuomo has also been putting into efforts not easily labeled as progressive, such as Upstate economic development.

Pundits say they feel the Cuomo of the past few months is a stark contrast to the Cuomo of this legislative session, who shied away from public and media appearances for weeks at a time.

It's fairly easy to see why Cuomo may have been off his game.

His reelection bid was complicated by rebellious progressives and unions who felt Cuomo had delivered more on conservative causes than on Democratic ones. The governor was also reeling from the backlash he faced from shuttering the Moreland Commission. His campaign strategy to ignore his Republican opponent, Rob Astorino, might have been more effective if Fordham professor Zephyr Teachout hadn't joined the Democratic primary. Her campaign quickly made Cuomo appear detached from voters, and at times exposed his tendencies as a bully.

Cuomo moved from a closer-than-expected election to face the death of his father, former Gov. Mario Cuomo, and the federal indictments of then-Assembly Speaker Sheldon Silver and then-Senate Majority Leader Dean Skelos. He appeared ready to end the legislative session early after securing a number of education reforms that were fought tooth-and-nail by teachers unions (and opposed by de Blasio). But the pressure mounted on the governor to deliver deals on rent regulations, mayoral control of New York City schools, and other big-ticket items, all while the legislature remained in turmoil thanks to their leadership crises.

Virtually all of the deals reached were less than desired as far as de Blasio was concerned, with the one-year extension of mayoral control of schools an especially bitter pill - and perhaps the final nudge over the edge.

With session over and his legislative opponents out of town, Cuomo leaped into action, issuing an executive order to create a special prosecutor for police killings. This not only ingratiated Cuomo to many on his left, but also brought one of his main rivals - and a natural de Blasio ally - AG Eric Schneiderman, closer to Cuomo's hip.

A flurry of executive activity was capped off by the finding of his fast food wage board that workers in the industry should be paid a $15-an-hour minimum wage. Cuomo was lauded by union leaders and progressive elected officials; his achievements made for evidence in the effort to disprove de Blasio's accusations that the governor was hamstringing the progressive agenda.

And, they allowed the governor to demonstrate one of his favorite points: that he gets things done regardless of political ideology.

On Thursday, de Blasio's office quickly shot out a statement praising Cuomo's decision to advocate a $15 minimum wage but laced with language highlighting that Cuomo is late to the party the mayor's been leading.

"Nothing would do more to lift New Yorkers out of poverty and move our economy forward than raising the wage...We welcome the Governor's support for a $15 minimum wage – and New York City stands ready to help make it a reality," de Blasio's statement reads. "We have been doing all we can here in the city: affordable housing, Pre-K for All, increasing and expanding the living wage, and much more. But combating income inequality requires bold action on all levels of government. I urge Albany to act quickly."