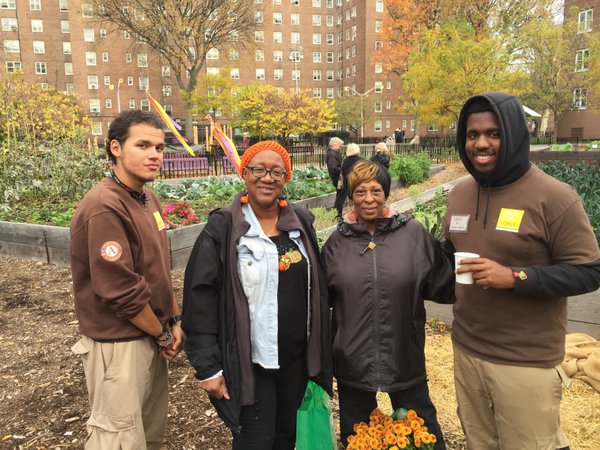 In the midst of city-wide controversy surrounding two new zoning proposalsconnected to Mayor Bill de Blasio‘s affordable housing plan, health and housing experts gathered to discuss how zoning could impact something else: food.

“I hope that by the end of today‘s discussion,“ said Nevin Cohen, associate professor at the CUNY School of Public Health, “we will see how spatial planning shapes local food environments and, therefore, how critical it is when we make decisions about how to change a neighborhood’s landscape.”

Part of a breakfast series put on by the New York City Food Policy Center at Hunter College, the event, Zoning and the City‘s Food System: Opportunities to Shape Healthier Food Environments in NYC, brought together a full room of interested parties - students, advocates, and others - at the CUNY Graduate Center. They met at a breakfast event as community boards, housing activists, preservations, elected officials, and others consider the de Blasio administration’s ambitious rezoning plans, which have received quite a bit of pushback so far.

While de Blasio’s plans for adding housing stock and density to several city neighborhoods like East New York, East Harlem, Flushing, and elsewhere have received a great deal of attention, food access is almost never part of the discussion.

Cohen introduced and moderated a conversation with three other speakers: Javier Lopez, deputy director of the city’s Department of Health and Mental Hygiene Center for Developed Equity; Daniel Hernandez, deputy Commissioner for neighborhood strategies at the city’s Department of Housing and Preservation; and Shy Lauris, director of community development at Cypress Hills Local Development Corporation.

Zoning plays a large part in shaping food environments, the panelists explained. For all of the opaque jargon--FARs, RCM, RFPs--what zoning laws do is fairly straightforward: set limits on what a piece of land can or cannot be used for. This includes determining what function a building can fulfill (residential, commercial, manufacturing, etc.), the population density that a building can support (think low- or high-density housing), maximum building height, the amount of space various structures can occupy, and the proportional guidelines for different spatial types (i.e. the ratio of landscaped space to traffic lanes or to parking lots).

Each panelist gave an individual presentation focusing on current and possible health-oriented zoning initiatives before the discussion evolved into a more fluid, open forum also including audience members.

Lopez, of DOHMH, spoke about standardizing health requirements in the city‘s neighborhood planning process, creating a sort of health checklist for city planners to incorporate into development.

“Right now it is kind of being done in an ad hoc way,“ he said, “when you have conversations on transportation, on health, on education, all that has to be formalized…We believe that if we formalized it, other agencies could be more responsive to the public health conversations that are taking place.”

Lopez also talked with excitement about progressive zoning policies from other cities that New York could look to adopt.

In “Transform Baltimore,” for instance, the city‘s zoning overhaul of 2014, Baltimore amended its zoning code to simplify the process of beginning an urban farm and preserving community gardens. “Transform” also adopted a broader array of health-oriented zoning policies that included increasing development around transit hubs, preserving open space, and creating mixed-use housing (buildings that double as residential and commercial spaces).

The last of these measures - mixed-use housing - Hernandez pointed to in his presentation as something the city‘s proposed Zoning for Quality and Affordability text amendment (ZQA) seeks to increase. By raising the maximum building height in certain neighborhoods by five feet, the amendment allows the bottom floors of residential developments to serve as high-quality retail space. This can often lead to new food markets, reducing distances residents and families have to travel from their homes to access a range of food.

ZQA, along with its sister bill, the Mandatory Inclusionary Housing text amendment (MIH), is currently receiving stiff opposition from community boards across New York, but Hernandez thinks this opposition is misguided. Much of the hesitation among New Yorkers surrounds residential affordability and fears of gentrification and rising prices.

“HPD was developing retail buildings with really bad retail space, or bottom ground floor space,” Hernandez said. “So we worked with Design Trust for Public Space to identify how the buildings could increase in height and still be contextual within the existing historic fabric of neighborhoods. To be honest [the plan] is not being received too well, people think that the five foot increase is a way for developers to get additional [floor area ratio], but it’s actually not…[DOHMH is] working with [several city agencies] to bring different types of incentives and programs to small businesses in order to fill the retail space.”

Supermarkets will also move in, Hernandez said. He explained ZQA would enable the city to “more deliberately” pedal its FRESH (Food Retail Expansion to Support Health) program, which provides zoning and financial incentives to developers and grocers when they build supermarkets in neighborhoods with a lack of healthy food options. 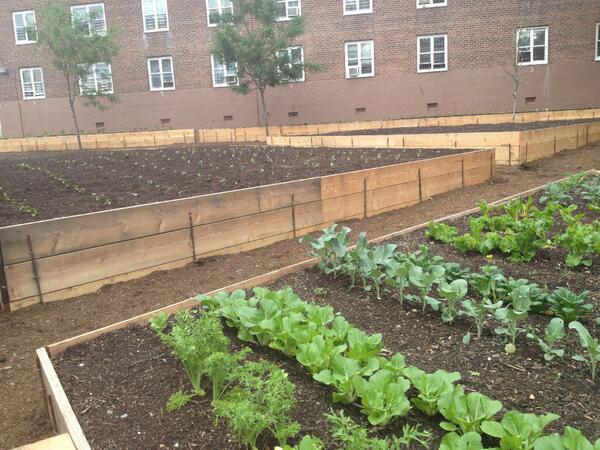 [an urban farm, via @nycfood]

Shy Lauris is in charge of a development in East New York that serves as a concrete example of what Hernandez speaks about. At the Food Policy Center event, Lauris showed the audience a development located at Pitkin Avenue and Berriman Street that was just beginning construction. The building, a model of what HPD envisions for many other parts of the city, will include 60 affordable rental units, with a FRESH subsidized supermarket on the ground floor. The building will also include a public community garden with private plots for each tenant.

Lauris, however, emphasized the role of financing in the project, saying it could not have happened were it not for the increase in density that the city granted the developer. The greater number of units allowed gave Lauris and her community the revenue to build the type of building they wanted. These decisions are at the essence of the de Blasio housing plan, with its rezoning proposals at the center, which allow for greater density and development incentives in order to spur new units - both market and “affordable” - and new retail.

“In order to have food on that lot, you need to have economies of scale“ she said, “you need to finance construction and it’s very difficult to do...in order to make this work we needed more density.“

Nevin Cohen, who worked with the Design Trust for Public Space to develop favorable zoning policies for rooftop agriculture in the city in 2012, added that financing is also what‘s holding back that movement, which spurs local food sourcing.

As the event drew to a close, where exactly additional financing might come from remained unclear. Hernandez said he hoped the food-friendly-living market will grow similar to the way energy conservation has over the past decade (think solar panels).

“We have an amazing opportunity to effect the marketplace,“ he said. “In previous years when the green building and energy efficiency movement was just beginning, HPD worked closely with [the U.S. Green Building Council] as well as the Enterprise Green Communities program to identify ways to require anything that we financed to be green and energy efficient. Now these standards are a part of all pipelines. We require developers to comply with the green communities program at a minimum, but that often leads to developers competing to build the best building.”

Money does not grow on basil leaves, though, and the financial incentives that tipped developers toward supporting energy efficient practices do not exist for community gardens. Hernandez hopes that food-conscious construction paradigms like Via Verde, which won the New Housing New York (NHNY) Legacy Competition, will push the market to demand healthier construction practices, but the economic hurdles still prove daunting.

Referring to the struggle to get developers to adopt sustainable energy standards, Hernandez said, “It wasn’t until we were able to monetize the savings to the developer that they became interested. But then there was an increase in construction cost we had to manage and it wasn’t until there was more market demand from people that it began to push the construction industry to make changes.”

Pausing for a moment, he concluded, “I am not sure how to monetize health incentives.”