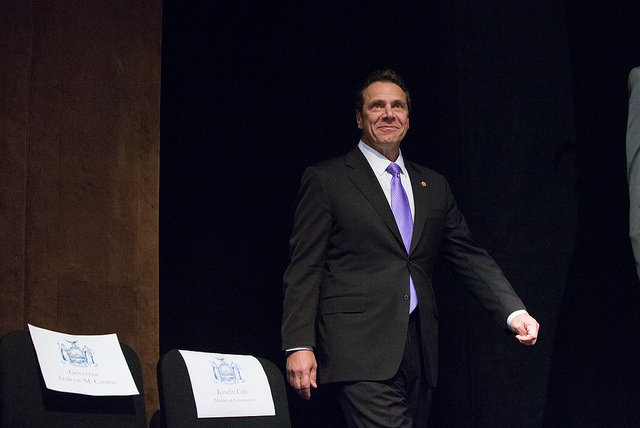 In response to the conviction of former Senate Majority Leader Dean Skelos on multiple federal corruption charges, Gov. Andrew Cuomo declared on Friday that the legislature "must stop standing in the way of needed reforms." Only a few hours later he vetoed two bills designed to speed and reform Freedom of Information Law response and require the state to pay court costs incurred by FOIL users whose requests a judge finds have been improperly denied.

Facing searing backlash from good government groups and accusations of hypocrisy, the governor partially reversed himself the next morning by issuing an executive order "to expedite the freedom of information law appeals process," requiring agencies to handle FOIL appeals within 90 days.

In a statement accompanying announcement of the executive order, Cuomo said, "My administration is proud to lead by example in making government more open and transparent." Pointing to the essence of his approach to the bills he vetoed, the executive order, and controversy around FOIL, Cuomo added, "and we will introduce a bill early next year to bring the same, necessary high standards of transparency to the legislature."

The legislature is currently exempt from FOIL.

The governor's weekend moves, appearing somewhat contradictory, garnered mixed reactions, including much criticism Friday evening, then some support on Saturday.

"The governor was given a clear choice between being part of the problem in Albany or part of the solution," wrote a coalition of good government groups in a statement released in response to the vetoes. "These vetoes call into question the governor's commitment to transparency and Freedom of Information."

Cuomo framed his vetoes as part of a concerted effort to make the legislature subject to the stricter FOIL rules. He called the reimbursement bill, sponsored by Assembly Member Amy Paulin, "myopic" and said he was concerned for "judicial discretion in FOIL cases."

On Saturday, a Cuomo spokesperson, Rich Azzopardi, continued pressing the idea that the veto was designed to force the legislature into action, telling various outlets: "The governor will not let the legislature off the hook for not being subject to FOIL."

Some advocates are pleased with the temporary compromise while others say Cuomo is not "leading by example" and is instead deflecting attention to the legislature to prevent the executive from having to comply with measures that will ensure greater transparency.

John Kaehny, executive director of Reinvent Albany and New York representative of the National Freedom of Information Coalition, pointed out that the FOIL bills were written by the state's own director of open government, Robert Freeman of the Committee on Open Government. Kaehny characterized Cuomo's executive order as "so weak it is close to meaningless."

"It takes Incredible chutzpah for a governor who just vetoed two important FOIL bills to say he 'won't the legislature off the hook,'" Kaehny told Gotham Gazette. "The governor's 'comprehensive FOIL reform' is another way of saying that the governor has no intention of strengthening FOIL. Skelos and Silver just got convicted, and it's the same old games in Albany."

Dick Dadey, executive director of Citizens Union, characterized Cuomo's vetoes as "unfortunate" but welcomed the executive order and said he believes the governor plans to move forward with FOIL reform in good faith.

"What the executive order represents is common ground between the governor and the legislature," said Dadey. "The governor had concerns about judicial discretion and putting an unfair burden on executive agencies over others. I take the governor's concerns as legitimate and not a smoke screen because otherwise he wouldn't have issued an executive order."

Cuomo is due to give his State of the State address in combination with his budget presentation on January 13 in Albany. At that time, or near it, the governor is expected to unveil his FOIL reform proposals, including to make the legislature subject to FOIL.

Assembly Member David Buchwald, sponsor of the bill designed to speed state agencies' FOIL appeals, told the New York Times the executive order was "A step in the right direction."