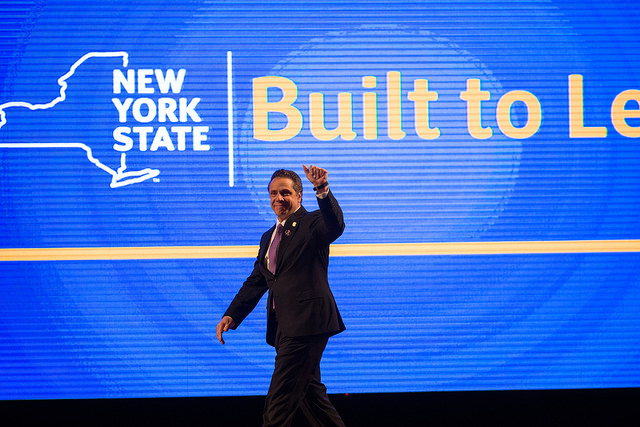 Cuomo taking the podium for his State of the State

Gov. Andrew Cuomo's sixth State of the State address was a dichotomy of the mundane and the moving, the political and the personal, striking contrasts whereby he celebrated infrastructure projects and lamented the status of the poor, homeless, and jobless.

As much as Cuomo tried to steer the conversation toward past achievements and future successes he also decried the state's failures to boost the economy for all, house a growing homeless population, and provide low-income families with a liveable wage and benefits. Not to mention the ethical failures of corrupt politicians, which the governor had no choice but to address.

Cuomo's $143.6 billion budget presentation and State of the State focused heavily on both investing in major transportation and other infrastructure and a social agenda that includes an eventual $15 per hour minimum wage and a proposal to provide workers with 12 weeks of paid family leave.

The governor had clearly laid out the "Built" portion of his agenda in the days leading up to Wednesday's address. He's pledged $100 billion for infrastructure projects including a retooling of Penn Station, a third track for the Long Island Rail Road, and an expansion of the Javits Center - all under his New York: Built to Lead banner.

The MTA will also see an investment of $26.1 billion, some of which will go toward a redesign of 30 subway stations and more wifi hotspots. Both LaGuardia and JFK airports will get attention--with LaGuardia being replaced and JFK getting an "overhaul"--as will airports, roads, and bridges in other parts of the state.

"All experts are unanimous that investment today in the infrastructure of tomorrow creates jobs and builds economic strength," Cuomo said. "In Washington, both sides agree. However, like so many issues, Washington just can't get it done. In New York, we can and we will."

Republican Assembly Minority Leader Brian Kolb said he was concerned by "all the spending" and wanted to see details on how Cuomo will pay for all of his infrastructure projects. "Where is all of this spending coming from? How are we paying for it? Well get those answers or we'll vote no," Kolb told Gotham Gazette.

The "Lead" segment of Cuomo's "Built to Lead" agenda had very much to do with backing up the governor's repeated assertion that New York is the progressive capital of the nation.

Cuomo returned to familiar territory by touting his record, including passage of marriage equality, as well as his being the governor to have closed the most prisons in the state and his various programs to reduce recidivism. "We are better at building and equipping a prison cell than a classroom. We are quicker to find a 16-year-old a jail cell than a job interview and that is just wrong," Cuomo said of the country. "New York State is going the other way."

Cuomo again asked the legislature to "Raise the Age" so that 16- and 17-year-olds aren't tried as adults. New York is one of only two states that continue the practice--North Carolina being the other. Cuomo took executive action last year to move the current population of teens from adult prisons to a juvenile facility, a move that is in process.

Cuomo pledged more job and alternative to incarceration programs, and "bail reform" that will require judges to consider whether a defendant is a danger to the public. New York is one of only four states that don't have judges consider public safety while setting bail.

"We all agree that public safety is paramount," Cuomo said. "But we can also all agree that it is madness to spend over $50,000 a year for a prison cell while ignoring the wisdom of early intervention."

Addressing another unresolved issue from last year, Cuomo asked the legislature to pass a bill establishing a special prosecutor to look into police killings of unarmed civilians. Last year Cuomo issued an executive order putting Attorney General Eric Schneiderman in charge of such cases. The move angered Republicans as well as district attorneys across the state.

"The appointment of an unbiased, qualified individual has helped restore trust in our system and it literally helped to end demonstrations in our streets," Cuomo said. "I urge you to pass a law making this reform permanent. Assemblyman Keith Wright has advocated for such a law for over a decade."

Cuomo's economic justice platform was imbued with a human touch that Cuomo has oftentimes been accused of lacking. His push for a $15 minimum wage, that is named in tribute to his father, who passed away last year, was greeted by cheers from the crowd. Both Republican legislative leaders remained seated while their Democratic counterparts rose from their chairs to applaud the measure.

Cuomo didn't offer any new details but his plan would see the minimum wage increase to $15 by the end of 2018 in New York City and July 1, 2021 in the rest of the state. Cuomo, who opposed a $13 minimum wage in the spring of last year argued vigorously for his plan. "If the minimum wage in the '70s had been indexed to the rate of inflation, you know where it would be? My proposal today at $15 an hour," Cuomo told the crowd. "What that means is that the minimum wage since the '70s has not kept pace. What that means is you've had 45 years of economic injustice where the poor were getting poorer, while everyone else was moving up. That's not America's way because that's not fair."

Cuomo went on to justify his plan because he said through social programs the state is subsidizing fast food restaurants that fail to provide a minimum wage, decrying such corporate welfare. "I say it's time to get out of the hamburger business," Cuomo said, repeating what has become a catchphrase during his minimum wage rallies.

Small business groups across the state are opposed to the measure and claim it will cost jobs. Meanwhile, more Democrats are growing concerned that Cuomo may significantly extend the wage phase-in to reach a deal with Senate Republicans.

Cuomo was expected to make a splash on the issue of homelessness and he did on two fronts. First he announced the commitment of $20 billion to combat homelessness, with $10 billion earmarked for 100,000 permanent affordable housing units and $10 billion for 6,000 new supported beds over 5 years, 1,000 emergency shelter beds, and other homeless services.

"This is New York. And we are New Yorkers and we will not allow people to dwell in the gutter like garbage," Cuomo said. He promised to fund 20,000 supportive housing units over the next 15 years.

Cuomo also unveiled a quality control system for homeless shelters across the state. Comptroller Thomas DiNapoli will oversee the quality review of shelters, with city Comptroller Scott Stringer examining the city system, as he already does, but perhaps with more attention and now with more state collaboration.

"They will do onsite inspections and review operating and financial protocols," Cuomo explained. "Thereafter, shelters they find to be unsafe or dangerous will either immediately add local police protection – or they will be closed. Shelters which they find as unsanitary or otherwise unfit will be subject to contract cancellation, operator replacement, immediate remediation or closure. If an operator's management problem is systemic, a receiver will be appointed to run that system."

Mayor Bill de Blasio praised Cuomo for several announcements, including on supportive housing, pre-kindergarten and minimum wage. He said that Cuomo's announcements of the homelessness audits appeared to be in line with work already happening and did not express initial concern. He did express conern, though, about items Cuomo appeared to bury in budget documents that could cost the city big when it comes to Medicaid payments, CUNY funding, and certain tax rebates. De Blasio said he and his team would review the budget closely and have more to say soon. Budget watchdogs began sounding the alarm, though.

After outlining a variety of programs and proposals, Cuomo turned to government ethics, saying that all depended on public trust in elected officials.

Then, toward the end of his speech Cuomo dropped his rhetorical tone. He described how in late 2014 his father's health was failing and revealed that he was in Buffalo for an inauguration ceremony when he got the news that his father had passed away.

"Life is such a precious gift and I have kicked myself every day that I didn't spend more time with my father at that end period," Cuomo lamented. "I could have. I am lucky. I could have taken off work, I could have cut days in half, I could have spent more time with him. It was my mistake and a mistake I blame myself for every day. But there are many people in this state who do not have the choice. A parent is dying, a child is sick, they can't take off of work."

Cuomo went on to explain how the United States is one of three countries that does not have paid maternity leave. He proposed providing New Yorkers with 12 weeks of paid family leave. Last year Cuomo and legislative leaders were unable to reach a consensus on competing plans. The Assembly has repeatedly passed a plan that would expand the state's disability insurance fund to pay for leave. Last year the Independent Democratic Conference put forward a proposal that had the state covering the estimated $125 million cost of the plan. Cuomo's proposal would be covered by workers through a $1 paycheck deduction.

Senate Republicans are not particularly open to the plan.

"This is all about getting these things from proposal to reality now," said Sen. Mike Gianaris of the Senate Democrats. "You've gotta like the agenda, these are things the Senate Minority has been talking about all along--paid family leave, minimum wage. It's about getting these things done now. If Senate Republicans decide to block things that are priorities to the people of New York then they will hear from the voters."