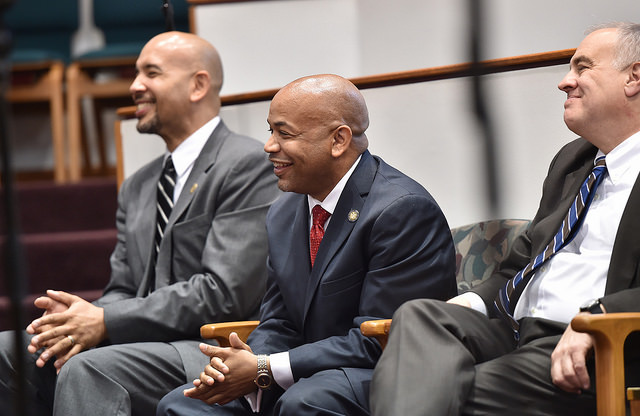 The long wait for recommendations from a group of Democrats charged with finding ways to improve the transparency and democratization of the state Assembly may soon be over. According to Assembly Member Gary Pretlow, co-chair of The Assembly Working Group on Operations, Participation and Transparency, the release of a 49-point report is imminent.

Pretlow told Gotham Gazette that the the committee's report will be made available after a press release is written and legislators return from their week-long mid-February break. According to Pretlow and several other sources, the rest of the majority conference was briefed on the dozens of recommendations contained in the report, some of which wouldn't be acted on until the start of next session, in 2017. Others that could be implemented as "tweaks" to operating procedure or legislation could be voted on this session, they say, while some would have to be agreed to by both the Senate and Assembly.

"We're just waiting for the press release to be done," Pretlow told Gotham Gazette. "We did a presentation of all 49 recommendations to the speaker [Carl Heastie] and all the members but we didn't give them copies because you'd already know what was in it if we did that. So, hopefully the report will be out after the break."

Both houses of the Legislature are due back in session on Feb. 24.

Neither Kavanagh or Pretlow would divulge any of the 49 proposals.

A number of legislators briefed characterized many of the changes as "common sense" and "overdue" with fewer "large," "big deal" changes. A few members indicated that they believed some larger issues have yet to be resolved. A number of members said they expect a public review process.

The group has been presented with a wide array of proposals from legislators and good government groups--things as simple as creating electronic alerts to notify legislators of committee hearing times and locations, using the internet to enhance public comment and participation, and revamping the Assembly's legislative search tool. More complex and politically difficult issues include creating a way for bills with wide support to be considered in committee and advanced to the floor for a vote.

Assembly Republicans and reform groups have derided the Assembly panel's deliberations for a lack of public hearings and for excluding legislators from the Republican minority. Kavanagh and Pretlow polled Democratic members and held meetings with good government groups for input on what changes might lead to more open debate, allow rank-and-file members to advance legislation, and perhaps even provide members from both parties with equal resources for staffing and offices.

Heastie announced the appointment of the working group on April 16 of last year after he won a leadership battle sparked by the indictment of former Assembly Speaker Sheldon Silver. At the time, Kavanagh was a member of an upstart reform caucus that asked candidates for Silver's position to consider whether changes should be made to increase transparency and make it easier for bills to make it to the floor for debate without the speaker's direct blessing. The group has been largely inconspicuous since Heastie announced it.

Earlier this year Assembly Republicans proposed a number of rules changes of their own that Democrats quickly rejected. Republican Assembly Member Jim Tedisco, who is backing a bill that would allow members to bring a bill to the floor for a vote if they have the support of 76 members (a majority in the 150-seat chamber), has pressured the group to release its recommendations. "They said they needed ways to make the Assembly more transparent, well we gave it to them and they rejected it," Tedisco told Gotham Gazette of the Republicans' attempt at rules reform, which included term limits for leadership positions.

Tedisco announced earlier this week that he was writing Kavanagh a letter asking for the transparency group's report. "These guys are just playing stall ball," said Tedisco. "It's nearly been over a year and now they aren't going to release it over vacation. It's the longest lived and least productive working group I've seen in my life."

.@JamesTedisco sending letter to @BrianKavanaghNY today asking where on earth those transparency reforms are pic.twitter.com/YrgsNOOfTQ

Tedisco said Kavanagh arrived at his desk shortly after he announced he was writing him, looking to collect the letter. "So I handed it to him, with the signatures of 25 other guys who signed the letter." He added that he didn't admire Kavanagh's position. "I've never seen Superman and Clark Kent in the same room and I've never seen a powerful leader voluntarily give up power," said Tedisco, referring to the hold of the speaker and majority on the Assembly. There are many questions about how much reform Heastie is willing to support.

U.S. Attorney Preet Bharara - who took down Silver and his Senate counterpart, former Republican Senate President Dean Skelos - has focused on what he said was the corrupting nature of the "three men in a room" structure that concentrates power in legislative leaders and the governor. He called on rank-and-file members to stand up and challenge leaders when they use their power to block votes or interfere in committees.

"You have to make sure everyone in the institution has an independent operating mind and brain and gut," Bharara told interviewer Alan Chartock of WAMC radio during his visit to Albany on Monday. "So at least somebody in the face of overreaching, or face of despotism, or face of corruption, will rally people to go to the other side and say 'This is enough, we can't go along with this.'"

Dick Dadey, executive director of Citizens Union, said Bharara's comments spotlighted the need for more for rules reform and increased transparency. "I think the U.S. Attorney's remarks were on target. They showed the necessity of the working group and the need for it to get its job done," said Dadey.

Assembly Minority Leader Brian Kolb said that Assembly Democrats should defy their leadership and issue a set of recommendations that takes some of the power back from the speaker--especially given how Silver was removed from office.

"The U.S. Attorney is dead right in asking, 'since when has it become acceptable for three men to decide everything,'" said Kolb, who lamented the rejection of his caucus' proposed rules changes. "These were good ideas, but from the minority point of view it was arrogance - they said, 'We're in charge and you're not.' The Kavanagh group did a lot of hooting and hollering for almost a year. It is nonsensical to continue to stall."

Democratic members point out that getting over 100 politicians, many of whom have long enjoyed the perks of being in the majority, all on the same page about revamping the rules of the chamber isn't exactly an easy task. While good government groups have been critical of the time it's taken many of them indicate they are withholding judgement until they see the final product.

DeNora Getachew, campaign manager and legislative counsel for the Brennan Center, said that she has had no indication of what the working group has focused on or that they've considered the Brennan Center's many reports on legislative rules that focus on empowering members to bring bills to the floor without the speaker's blessing. "That's the heart of how to empower and operate a more democratic process," said Getachew.

"The report should have been out before the start of 2016 so the rules could have been enacted this year," said Dadey of Citizens Union. "I would have prefered the group acted quickly and had an open public discussion but I am hopeful that the report is one that we can embrace."