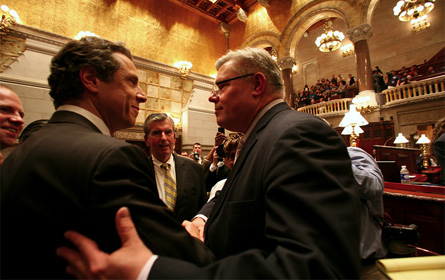 Nearly four days past the scheduled end of legislative session, about seven or eight hours into a Senate Republican conference late Friday afternoon, the language of the "Big Ugly" began to appear in print -- the "Big Ugly" being the package of rent laws, property tax cap and mandate relief legislation that was patched together in last-minute negotiations. The catchall bill was one of the last things the Senate considered before its historic vote on same sex marriage. Most people were not paying much attention.

As America waited for the vote on marriage equality, legislators voted on the "Big Ugly." The final language arrived in the late afternoon; the Senate Democratic conference met at 4 p.m., and the vote on the bill took place in the late evening. While some details about the basics of the proposal had leaked earlier in the week, some of the language remained unclear just hours before the vote. The bill passed with only five dissenting vote.

In the chaos, confusion and eventual jubilation of the long grind that was Friday and the days before, observers may have missed a number of important pieces of legislation, including the "Big Ugly." The importance of the vote on same sex marriage -- and the joy and the outrage that followed -- eclipsed the other bills. But much of this other legislation will certainly be pivotal to the future of New York state and New York City.

Here is a rundown of some of the other things the legislature did on Friday.

As the language of the Big Ugly became available, city Democrats concerned with the rent law quickly realized that Gov. Andrew Cuomo and Assembly Speaker Sheldon Silver had not negotiated the kind of deal they were hoping for. When details were made available earlier in the week, legislators like Sen. Adriano Espaillat made it clear that they hoped Cuomo would keep negotiating for tighter regulations and for a system to insure that landlords really make the improvements to apartments they say they do. This is important since making improvements can allow the landlord to remove the apartment from rent regulation.

The deal revealed Friday was basically the same as the measure disclosed earlier in the week, minus some implied checks on landlord improvements. There were those who thought that represented a victory of sort for tenant advocates.

"The laws were extended without any weakening amendments for the first time in 18 years, and with minor changes favoring renters, amid what can only be described as a hostile political climate for tenants. Those who have been active in the fight for stronger rent laws should be proud of their efforts," said the Metropolitan Council on Housing in a statement.

Michael McKee of Tenants PAC was not particularly proud of what his lobbying efforts had wrought. He told Democratic legislators that, if they voted no, his group would defend them against any attacks by Cuomo or others who might criticize them for voting against a bill that included the renewal of housing laws.

Espaillat voted no based on his concerns about rent, explaining he felt the measure "leaves too much to be desired." Sen. Liz Krueger, who voted for the bill, said she viewed it as a "down payment" from Cuomo on future improvements to the rent laws. Sen. Ruben Diaz, who voted no, said that he felt the rent language "protects the rich."

When signed into law, the bill will increase the rent threshold at which landlords can deregulate vacant apartments from $2,000 to $2,500. The law also raises the limit at which landlords can deregulate apartments because of the income of the tenant. Residents will now have to have an annual income exceeding $200,000 a year for two years, up from the current $175,000.

Individual Apartment Improvement rent increases, which allow landlords to increase rents during a vacancy by making cosmetic upgrades to the apartment, remained basically the same. Advocates wanted to see a cap on how high the rent could be raised through this process, but that did not happen.

Developers scored a major victory with the extension of the 421-a tax credit. The credit was intended to give breaks to developers who include affordable apartments in their projects, but it was extended for stalled projects that do not include more moderately priced apartments.

While objecting to some other parts of the bill, Steve Spinola of the Real Estate Board of New York expressed satisfaction with the action on 421-a. "We are obviously pleased with that," he told Crain's. "It is critical to get building going again."

The bill contains language instructing the state Homes and Community Renewal Agency to oversee the changes in the law, but it isn't clear how active the agency will be in enforcing the rules and checking on improvements made by landlords.

The Metropolitan Council noted in its release that Cuomo refused during the year to explain his stance on rent, saying only that he wanted "stronger" laws. Apparently, the statement continues, he made such vague statements to "set the bar low."

The Power of Money

So why was it so hard for Silver -- the second most powerful man in Albany -- and Cuomo -- who is being hailed after his same-sex marriage victory as the most effective governor in America and a frontrunner for the 2016 presidential nomination -- to deliver stronger protections for tenants?

There are, of course, arguments against rent control, that it stifles the development of housing and interferes too much in the marketplace.

But campaign contributions may have something to do with it as well. According to a study by Common Cause/NY, New York City, real estate interests donated almost $10 million to local and statewide races in 2009-2010 -- a sum nearly double what was spent by the real estate industry from 2007-2008. Fifty-two percent ($5,114,665) of that cash went to Democrats, while 24 percent ($2,351,924) went to Republicans. The remaining 24 percent was spread throughout third parties and ther groups, with the largest amount -- more than 9 percent -- going to the Independence Party.

Over $2 million of that money went to both Democrats and Republicans in the New York Senate, with Republicans taking 52 percent ($1,265,925.) That distribution may surprise many, as real estate cash has been considered the factor that has kept Republicans in charge of the Senate.

For some in the city, the negotiations underscored what they see as a need to let the city government -- and not the state -- regulate rents in the five boroughs. Calling the final bill "fairly weak," City Councilmember Jumaane Williams said in a statement. "The horse-trading and backroom deals that occurred at the expense of New York's tenant population is further evidence why home rule needs to be returned to the City Council. I hope New York can count on Gov. Cuomo to step up and keep his new stated commitment to affordable housing."

Before the vote on the Big Ugly, the Senate took up the 2020 Plan for the City University and the State University of New York. Under the legislation, CUNY is allowed to increase its tuition by $300 a year for five years. The law also includes tuition assistance for students.

Barbara Bowen of the Professional Staff Congress, which represents CUNY professionals, was not pleased with the tuition increase. "Five years of tuition increases is not the way to protect opportunity for CUNY students, nor is it the way to ensure long-term public investment in public higher education. Tuition increases are a tax in disguise -- a tax that disproportionately hurts the poor," she said in a statement.

However she did praise the bill for taking "an important step toward protecting the lowest-income students from the sting of the proposed increases by providing credits for tuition" and for ruling out "differential tuition," which would have allowed some state schools to charge more than others.

The measure also would allow certain SUNY schools to apply to the state for $140 million in grant money each year.

The last vote before same-sex marriage came on the livery cab bill backed by Mayor Michael Bloomberg. The bill, which had already passed in the Assembly, would create a class of livery cabs that could be hailed on the street outside of Manhattan. The city could issue up to 30,000 licenses at $1,500 apiece, for the new cabs, which would feature amenities similar to yellow cabs but have a different outward appearance. The law would not go into effect until next year.

Bloomberg, facing opposition to the idea from the City Council took the issue to Albany instead. There the well-financed yellow cab owners, upset about additional competition and fearing their medallions -- or licenses -- would diminish in value, steadfastly opposed the bill.

A fleet of yellow cabs surrounded the Capitol to lobby against the bill. But a well-organized group of livery cab drivers spent the week lobbying legislators, too.

Republican Sen. Martin Golden sponsored the bill in the senate. Golden had been coy all week about whether and when the bill would come to the floor --- telling the Gazette only "it is still fluid." But with the vote scheduled, a number of lawmakers spoke for and against the bill. Sens. Diaz, Jeffrey Klein, Velmanette Montgomery and Martin Dilan all praised livery drivers and voted for the bill. Montgomery said that the livery cab industry had helped in the expansion of Brooklyn and allowed it to overcome its stigma as a dangerous place. A number of legislators noted that livery drivers had been killed in the line of duty, traveling to outer boroughs. Sen. Toby Ann Stavisky opposed the measure "reluctantly," she said, because she thought it was a matter for the City Council.

The bill passed 40 to 21. Cuomo has yet to say publicly whether he supports it, and many staffers say he is not particularly fond of the bill. If he does sign the bill into law, it is expected that the measure will face legal challenges.

When it came time to act, though, Senate Republicans balked. They claimed the redistricting bill supported by Cuomo was unconstitutional and that the only way to change the system would be through a constitutional amendment that would take years to implement.

Redistricting only takes place once every 10 years -- after each census. As a result the Republican's stance would halt any chance for independent redistricting until after the 2020 census. It would keep the drawing of districts in the hands of a committee of legislators from the majorities in both houses, called LATFOR.

Cuomo has publicly promised to veto any district lines drawn under the old rules. The courts would then likely get to draw the lines. Experts believe that because of current demographics independent judges or commissions would draw lines to reflect the greater Democratic population in New York State -- thereby making it difficult for Republicans to maintain a majority in the Senate.

Cuomo has pledged to support Republican candidates who supported same-sex marriage legislation. And many observers wonder if a Republican senate would benefit Cuomo because of his conservative fiscal tendencies and because of the way the legislature functioned when Democrats controlled both houses of the legislature from 2008-2010.

Despite all their last minute accomplishments on Friday, the Senate still has work to do. It failed to act on a health insurance exchange bill that is required under the federal health insurance law. The Republican Senate reportedly balked at the Assembly's version of the bill because they found it "too liberal." If they do not return to pass legislation shortly New York could miss federal deadlines for up to $100 million in funding to support the creation of the exchange.

It is expected that the Senate could return in a few weeks to take up this and other unfinished business.