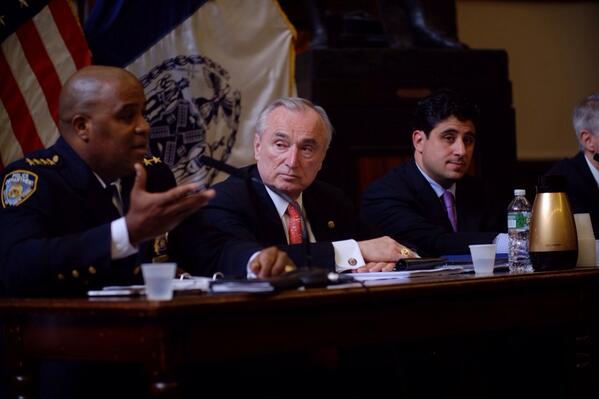 Representatives from the NYPD testify at the City Council (William Alatriste)

The first showdown between Mayor Bill de Blasio and City Council Speaker Melissa Mark-Viverito, erstwhile progressive partners, has come over the police. In his budget last week, de Blasio shot down Mark-Viverito's call for 1000 new officers, but the speaker says she's sticking to her demand.

While some have criticized de Blasio for bringing back William Bratton as police commissioner because of his past association with Mayor Rudolph Giuliani and a variety of punitive policing tactics targeting youth, homeless people, and sex workers, the mayor held the line on the police budget. He has refused to add more officers despite extensive pressure from the police unions.

Mark-Vivertio, however, in her first major budgetary stand is demanding that the Mayor add 1,000 new officers. The $97 million price tag makes up 40% of the new spending the Council is proposing.

Several council members feel that local police precincts are stretched too thin, forcing them to rely on excessive and costly overtime. The speaker argues that some of the new expense of hiring more police will be recouped by reducing overtime costs—a laudable goal. However, much of the overtime accrued by police is not directly tied to staffing levels. Officers routinely rack up large amounts of overtime when they make arrests near the ends of their shifts. Standard procedure calls for the arresting officer to follow through on the processing of the arrest to ensure continuity of evidence and paperwork. Another big chunk of overtime comes from detectives and specialized units who are sometimes put on assignments that take up more than a standard shift in order to maintain the integrity of an investigation.

Reducing these forms of overtime would require a change in police procedures, not increased personnel. The one area where staffing increases might reduce overtime costs is in counterterrorism, but adding more cops there would do nothing to beef up local precincts. At a city council hearing on Tuesday Bratton said he intends to use the equivalent of 320 officers' worth of overtime to address increased crime in public housing, but according to the NYPD's own analysis most of this uptick is in domestic violence, which is largely impervious to increased policing.

During the Bloomberg years the number of police fell by 15%. But, over the last 20 years major crimes such as homicide and robbery are down 80% or more as are auto theft and larceny. Despite constant claims by many police leaders and politicians, the evidence is clear that these dramatic drops in crime are not primarily the result of policing. While there were significant changes in how policing was conducted in New York in the mid 1990s, the crime drop started well before that.

More importantly, the crime drop is an international phenomenon affecting cities and countries that made no changes in the way they conducted policing, added no new officers, and in some case pursued strategies antithetical to those used in New York. Berkeley law professor Franklin Zimring, in one of the most rigorous examinations of the issue, found that at best 20% of the reductions in robbery and burglary might be because of policing changes specific to New York, and even this was based on a process of eliminating other explanations, rather than the identification of clear positive evidence. In addition, there are numerous studies that show that there is no causal relation between increasing the number of police and reducing crime. During the high crime periods of the 1980's and 90's New York had one of the highest concentrations of police per capita of anywhere in the country, but it seemed to have no effect on explosive outbursts of crime.

Throughout the city and around the country there is a growing awareness that there are ways to produce public safety that don't rely on police, courts, and prisons. New York has a string of community based organizations, such as SOS Crown Heights, Man Up!, and the South Jamaica Cure Violence Program, that are working with young people in high crime areas to teach them alternative conflict resolution methods, help them overcome problems at home, and mentor them for success in school, work, and life.

The City Council has been an important supporter of these groups, using some of its discretionary money to fund them through the Council's Anti-Gun Violence Task Force co-chaired by Jumaane Williams from Brooklyn and Fernando Cabrera of the Bronx. Unlike Mayor Bloomberg, Mayor de Blasio has put some resources into the baseline budget for these groups. The Task Force, however, asked for more and is trying to find the money. The difference: about $6 million.

One of the things that's been learned by these groups and many researchers is that increased and aggressive policing actually makes their work harder. The constant harassment and criminalization of young people pulls them out of school, disrupts their home life, reduces their self-esteem, immerses them in a culture of violence, gangs, and professional criminality, and inhibits their future job prospects.

The main culprit in this dynamic has been the aggressive pursuit of the War on Drugs. The NYPD continues to make tens of thousands of low-level drug arrests every year. After a short-lived drop off during the mayoral transition, marijuana arrest rates have again spiked to their previous levels of 30,000 a year. And these arrests are highly concentrated in communities of color. According to an analysis by Queens College Sociologist Harry Levine, in the first 3 months of 2014, in predominantly white Park Slope, police made 7 marijuana possession arrests and in Carroll Gardens and Red Hook, they made 12. At the same time police made 111 of these arrests in Bedford Stuyvesant, 130 in Crown Heights and 438 in East New York, all neighborhoods that are mostly black and Latino.

Commissioner Bratton has made it clear that he opposes decriminalization of marijuana (despite the fact that private possession is already decriminalized) and will continue to aggressively enforce the drug laws. More police on the streets invariably means more low level arrest, more criminalization of young people, and more of a siege mentality in high crime areas. As Bratton pointed out in his first stint as Commissioner, police are not trained to be social workers, they are trained to enforce the law through arrests.

It is ironic that the members of the BLAC, who represent mostly poor minority neighborhoods, are prioritizing increased spending on new police while decrying the lack of resources for community-based anti-violence initiatives. Politicians in high crime communities like those represented by BLAC members need to quit looking to the police to solve their communities' problems. We cannot arrest our way out of gangs, drug abuse, and or even violent crime. It's time to move beyond the failed policy of throwing more cops at the crime problem. To really produce long-term safety we need to support truly progressive programs that invest in the lives of young people in high crime areas, not in more police.

***
Alex S. Vitale is Associate Professor of Sociology at Brooklyn College and author of City of Disorder: How the Quality of Life Campaign Transformed New York Politics
Contact: This email address is being protected from spambots. You need JavaScript enabled to view it. & @avitale