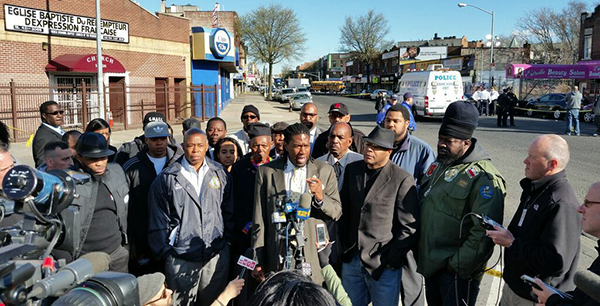 In the wake of the protests following the Eric Garner and Michael Brown grand jury decisions the conservative echo chamber was abuzz with talk of “black on black crime.” Former Mayor Rudy Giuliani led the charge by calling people protesting police killings hypocritical for not speaking out as forcefully against blacks who are killing other blacks. That discourse has continued as protests and rioting take place in Baltimore. As Gary Younge pointed out in the Nation, this is a racial canard designed to deflect attention from the very real problem of police killings of unarmed black men.

Monday night 6 people were shot, 2 fatally, outside a church in Flatbush, Brooklyn. The exact causes are not known, but it may have involved an escalation of a long-standing conflict between specific individuals, with others caught in the crossfire.

This tragic loss of black lives immediately provoked a significant response from community leaders and institutions working to stop the violence. City Council Member Jumaane Williams has been a tireless advocate for additional funding for community-based anti-violence initiatives. As co-chair of the City Council’s Gun Violence Task Force he has orchestrated money for a variety of violence interruption programs across the city. Based on the Cure Violence model, these programs take a public health-centered approach to interrupting the cycle of retributory violence and work with high-risk youth to get them off the street and into positive activities. This is a stark alternative to the mostly punitive methods of violence control that predominate in poor communities of color. Rather than rely on police and prisons that typically respond after the damage is done, these programs attempt to prevent the violence from occurring in the first place by reaching kids at an interpersonal level.

Immediately following Monday night’s shootings, members of Gangstas Making Astronomical Community Changes (GMACC) went out on the streets to try to find out exactly what had happened in an effort to engage in rumor control. Too often acts of violence are misinterpreted, leading people to make false accusations that can lead to further violence. Once the facts are known, those close to the event can be reached on a peer-to-peer level to try to stop acts of retaliation.

Tuesday morning, local political and community leaders such as Borough President Eric Adams, Council Members Jumaane Williams and Mathieu Eugene, local religious leaders, and anti-violence activists such as Tony Herbert held a press conference in which they worked to ensure that accurate information was presented about the event in hopes of avoiding an escalation of tensions. In particular, they were concerned about press reports that the incident had been “gang related.” Each speaker pointed out that there was no evidence for this and that to call it such would potentially provoke the involvement of those in gangs in the area.

In addition, speakers like Shanduke McPhatter of GMACC emphasized the need to develop a change in the mindset of people in the community who keep turning to guns. While Council Member Williams pointed a finger at the role of the NRA in gun violence, McPhatter noted that people will pick up a knife if a gun isn’t as handy and their state of mind is oriented toward violence.

GMACC is now working closely with the community-based organization East Flatbush Village, which received money from the City Council a year ago to provide wrap around services for “at risk youth.” Their new program is providing young people with after-school mentoring, athletics, and counseling in hopes of diverting these young people from a life on the streets. In many cases these young people have experienced violence and abuse and have had nowhere to turn in the past. As John Jay College criminologist David Kennedy points out in his review of Jill Leovy’s book Ghettocide, the police and criminal justice systems are not oriented toward helping the victims of inner-city violence, who then often go on to become perpetrators. The cycles of arrest and incarceration often serve to further traumatize these young people rather than healing them in a way that breaks the cycle of violence.

East Flatbush Village is working with several local schools in the 76th Precinct to identify young people in need and involve them in organized athletics, with coaches who also act as mentors and positive adult role models - something often lacking for these young people. They also participate in regular peer-to-peer and individualized counseling. They are asked to “check in” about what’s going on in their lives in hopes of identifying and interrupting violent and self-destructive patterns of behavior.

These community-based initiatives are not a panacea, they have to be part of larger structural changes that provide people with real avenues out of poverty and social isolation. To that end, Williams and the City Council are also calling for a huge increase in summer jobs for young people in low income communities across the city in this year’s budget. There is abundant evidence that large scale jobs programs can help reduce crime and set young people on a more positive course. In addition, they lack all the negative collateral effects that stem from relying on a criminal justice based approach.

Cure violence programs received additional support from Mayor de Blasio in last year’s budget, marking a break from Mayor Bloomberg, who consistently blocked such funding. It is ironic that those who shift the blame for police violence and mistreatment onto communities of color provide so little support to those working to improve these communities. While mayor, Giuliani consistently reduced support for community-based programs designed to engage young people in the arts, sports and employment. To then accuse those communities of not caring about crime and violence is the height of politically-motivated hypocrisy.