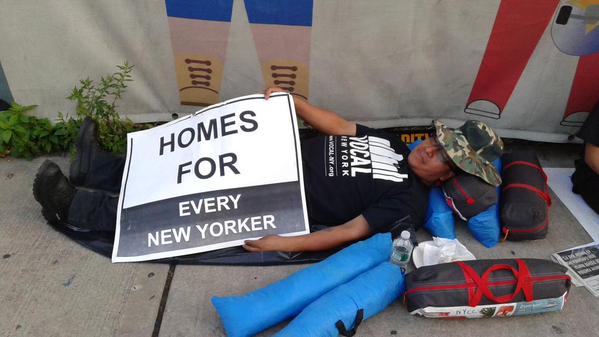 A sleep-in protester with the message (photo: @VOCALNewYork)

Mayor de Blasio and Commissioner Bratton were confronted by the growing disorder associated with homeless mentally ill people at a press conference on Wednesday. The mayor responded that the city is both relying on aggressive “quality of life” policing and attempting to develop supportive housing to try to address the roots of the problem. This is a refreshing alternative to the liberal approach of the Dinkins years in which people were told that they needed to tolerate a certain amount of disorder while long term solutions were pursued, many of which were out of reach, we were told, given federal budget cuts.

De Blasio has consistently voiced his support for using the police to maintain order as well as fight crime, sometimes spuriously linking the two under the banner of the “broken windows” theory. He has also called for a significant expansion of both supportive housing for the homeless and affordable housing more broadly. But is his approach really going to work any better for either homeless people or local residents? Are cops really the ones who should be so regularly on the front lines of addressing mentally ill people on New York City streets?

In the early 1990s New York City faced a significant crisis of public order related to the growth of mass homelessness and the breakdown of the State’s mental health system. Neighborhoods throughout the city were confronted by homeless encampments, wide spread panhandling, squeegee men, and at times the menacing and even violent behavior of mentally ill people living on the streets and subways. The system of policing, emergency shelters, and mental health care seemed powerless to deal with people like Larry Hogue who for years threatened, annoyed, and at times assaulted residents along West 96 Street. Despite repeated arrests and hospitalizations, he would always return to the neighborhood and continue his anti-social behaviors. The city spent hundreds of thousands of dollars processing him through police precincts, courts, jails, and emergency rooms, with no positive outcomes for either him or local residents. Hogue was eventually subjected to a year’s imprisonment on assault charges followed by a long-term psychiatric commitment at Creedmoor State Hospital.

The sense of a city out of control during this period contributed to the political rise of Rudolph Giuliani and a police-centered approach to dealing with the homeless mentally ill. For some time that approach significantly reduced the public impact of mass homelessness, but only by undermining homeless people’s civil rights and personal dignity, and substantially increasing the rolls of the mentally ill in city jails and state prisons. However, no real progress has been made on improving our mental health infrastructure or reducing homelessness. In fact, homelessness has been on the rise almost every year since the early ‘90s with nearly 60,000 people currently in the shelter system and thousands more sleeping out of doors each night.

The New York Post recently chronicled the rise of a new homeless denizen of the Upper West side who, like Hogue, suffers from severe mental illness and has been unresponsive to repeated arrest and emergency hospitalization. While the Post’s breathless coverage has the feel of moral panic designed to undermine the mayor’s overall credibility, the number of people sleeping on streets, in subways, and even occupying Tompkins Square Park has increased.

The mayor and police commissioner pointed out to reporters that they have invested in significant new training for police in how to deal with the mentally ill. Over the next few years 10,000 officers will undergo four days of specialized training in dealing with a wide variety of potential interactions in hopes of reducing the spate of fatal outcomes, seen nationally, in which police kill people experiencing a mental health crisis. They are also being made aware of the emergency services available for people on the streets and how to use verbal skills to deescalate contentious interactions and coax people into services and more socially acceptable behaviors.

There are several problems with this approach, however. First, there aren’t really any meaningful services to coax people into. People who are homeless and mentally ill are likely to experience repeated and prolonged periods of crisis. The main service available to them is emergency mental health hospitalization, in which people are held for a few hours or a few days, given medication until they appear stable, and then released back onto the streets, often leading to either chronic under-treatment or a very expensive and often ineffective revolving door between jails and hospitals, as recently chronicled in the New York Times.

Second, armed uniformed police really aren’t the best people to assign to this important task. Over the last generation we have seen a dramatic shifting of local resources away from social services and towards police and prisons. Emotionally disturbed person (EDP) calls make up a significant part of patrol officers’ time and up to 30-50 percent of people at Rikers Island have a major diagnosed mental illness—all at tremendous public expense.

The primary function of police is to use force and coercion to enforce the law. As such they develop a mindset that sees the world as full of potential threats and feel a profound need to command authority and obedience in interactions with the public, ironically in an effort to avoid actually having to use force against people. Those experiencing a mental health crisis, however, do not typically respond well to that police demeanor. Attempting to train officers in a new demeanor, while desirable, is unlikely to be very successful given the profound pressures to maintain an authoritative public profile.

In reality, when police are involved they tend to fall back on their core approach which is criminalization and coercion. Since Bratton’s return we have seen a continuation of hostile and prejudicial policing targeting homeless people on the streets and subways. While “stop and frisk” numbers are down, misdemeanor arrests and summonses for the kinds of activities associated with homelessness remain shockingly high.

Recent court monitoring by the Police Reform Organizing Project uncovered multiple cases of homeless people being arrested and ticketed for minor violations like taking up two seats in the subway and being in the park after dark. Jena Rice and Marcus Moore from Picture the Homeless pointed out in the Daily News that the ongoing criminalization of homeless people “defeats the purpose if one part of the administration takes productive steps to address housing, while the NYPD sets homeless New Yorkers back by unnecessarily giving them criminal records and making it harder to maintain employment and self-sufficiency.”

Rather than relying on the police, we need to utilize trained mental health workers. The city has a few crisis intervention teams, staffed with trained clinicians, but they have limited hours and are not well connected to 911, meaning that it is usually the police who are dispatched first. The city also has civilian outreach teams, but they are small in number and lack access to meaningful services. Other cities have developed more robust crisis intervention teams that are the primary response mechanism and outreach teams who can develop individualized case management plans to deal with more chronic situations. In either case, the outcomes are better and the costs are lower.

Of course such an approach requires the presence of meaningful mental health and housing services for people to be referred to. When those services exist, people’s lives are stabilized and the burden on the rest of us as residents or tax-payers is reduced. Recent studies in Los Angeles, Salt Lake City, Denver, Boston, and other areas show that providing people with supportive housing through “housing first” initiatives is cheaper and more effective than leaving them homeless and cycling through shelters, jails, and emergency rooms. New York has supportive housing, but it is not enough and is losing state funding.

The mayor has pointed out that First Lady Chirlane McCray is engaged in a top-to-bottom review of the city’s mental health services, with a focus on the criminal justice system. This is good news and hopefully will include more services and mechanisms for working with people in crisis that don’t involve the police, courts, and jails. Significant help from the state will probably be necessary to make any major improvements, something for which neither the current nor previous Governor Cuomo has been known for.

There is another problem with the mayor’s response on Wednesday, which is that his calls for supportive and affordable housing seem thin. While the mayor has proposed 200,000 new and saved affordable units, to be obtained mostly through inclusionary housing in which zoning limits are increased in return for more “affordable” units being included. The problem is that almost none of them would be affordable to homeless people. According to Jennifer Flynn at VOCAL New York, the plan only has about 1,250 supportive housing units in which people receive permanent housing with a variety of mental health, substance abuse, and employment services. The mayor is hoping the governor will renew the NY-NY program, which might add another 30,000 units over several years, but this still falls far short of the growing demand.

In response, a large coalition of community-based groups, service providers, and yes, construction unions is calling for a major increase in capital spending to build 15,000 units of supportive housing for currently homeless New Yorkers. To press the cause, they held a sleep-in overnight Thursday at the long undeveloped Seward Park site in the Lower East Side.

Mayor de Blasio learned from the ‘90s that disorder matters. Unfortunately, the lesson he took away was that aggressive policing is a necessary part of managing mass homelessness and that affordable housing is something primarily for the middle class and working poor. With the growing numbers of homeless people and the inadequacies of our mental health infrastructure this approach may have run its course. We can’t criminalize our way out of homelessness and we can’t solve it with middle class housing schemes. The city must invest new capital dollars in substantial new housing that directly targets the poorest and most vulnerable - and at times disorderly - New Yorkers. That is a solution that will benefit both them and the rest of us.