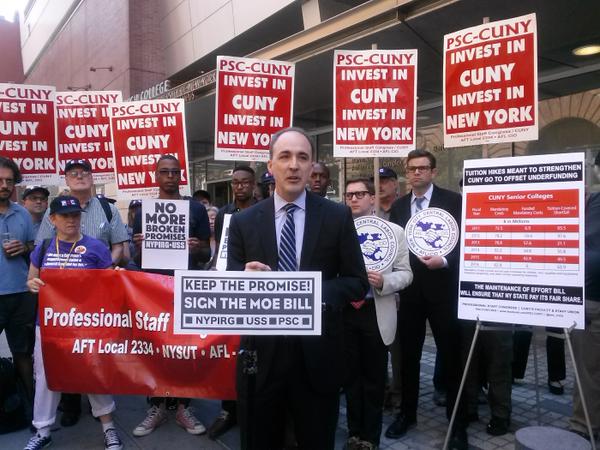 Calling on the governor to support CUNY staff (photo: @PSC_CUNY)

Employees at the City University of New York (CUNY) have been without a contract for over five years, despite the fact that most other state workers have not only settled their contracts but are actually preparing to negotiate the next round of agreements. The major hold up is a demand by Governor Andrew Cuomo that any salary increases for CUNY employees come out of the University’s operating budget - in essence, a major cutback in CUNY funding.

Given the long period without a contract, the cost of retroactive pay, just for faculty and professional staff, is at least $240 million to stay consistent with what other state workers received. The City has agreed to pay its share. This tension exists despite the fact that CUNY only receives around $500 million in direct support from the State each year and another $300 million out of the statewide Tuition Assistance Program (TAP) that serves public and private colleges. A cut of the magnitude created by forcing CUNY to pay for salary increases from operating expenses would be devastating to the university system and the 275,000 students it serves.

Last Tuesday, Governor Cuomo told reporters that rather than the State providing additional funds for CUNY and its employees, the City should pay more of the costs, a message similar to the one he has delivered recently concerning shortfalls at the MTA. The State took over primary financial responsibility for CUNY during the New York City fiscal crisis of the 1970s. Since then, the State has provided about 75 percent of government funding, with the City picking up the rest, mostly in support of CUNY community colleges. Cuomo says that he wants to revisit that arrangement given the City’s relative fiscal health. This seemingly rational stance belies several important facts that undermine the governor’s position.

First, the State’s fiscal health is not really an issue. The State had several billion dollars extra in revenues this year to spend, but it chose not to spend it on public higher education. Both CUNY and SUNY were given flat funding, budgeting that failed to take into account mandatory cost increases such as higher energy and maintenance costs, resulting in a $63 million shortfall for CUNY.

The governor has not said whether he will support a new bill passed by the Legislature this month that would fix that problem going into the future. In addition, last year the governor saw fit to use some of the State’s extra revenue to actually cut taxes for many residents, resulting in millions of small checks being sent out that seemed more like an election year stunt than rational fiscal policy. In fact, generous tax cuts made under Governor Pataki have severely undermined the state’s finances. Ending these tax breaks, which went overwhelmingly to the very richest New Yorkers, would generate billions in revenue, more than enough to place CUNY on stable footing.

According to an analysis by the Professional Staff Congress - CUNY, the State has consistently shifted funding during this period from state aid to student tuition. In 1989, tuition covered less than 20 percent of CUNY operating costs, while today it is closer to 50 percent. This, despite the fact that over half of CUNY students come from families that make under $30,000 a year. Tuition has increased by 58 percent in the last five years alone and more tuition increases are being planned.

Second, it is revenue from the city that makes state government possible in the first place. The state budget is a giant engine of resource shifting from downstate to upstate. An analysis by the Rockefeller Institute done in fiscal year 2010 showed that upstate regions received 42 percent of state funding despite generating less than 28 percent of revenue, including those from tuition, gambling, etc. New York City generated 45 percent of revenue, but received only 40 percent of funding, with downstate suburban counties making up the remaining difference. The idea that New York City is not paying its fair share is ridiculous.

Third, no other local area is being asked to engage in cost sharing to support public higher education at the four-year colleges and graduate schools. Upstate counties do contribute to community college funding, but Buffalo, Albany, and other cities with SUNY schools are not asked to cover basic operating expenses in the way Cuomo is proposing for CUNY.

Fifth, funding for CUNY generates significant fiscal as well as social advantages for the state. CUNY students, who are mostly non-white and first generation college students, tend to shift from being consumers of government resources to producers of tax revenue upon graduation. Failing to invest in this population suggests a callous disregard for both this economic reality and the interests of these students and their communities.

Perhaps the governor, who like his father was a product of parochial and private schools, fails to appreciate the central importance of CUNY for communities of color and immigrants. CUNY, as much as any other government institution, has been a central force in the building of the middle class and the integration of immigrants into the mainstream of society. It’s time that he treats funding for CUNY as the social justice issue it is, rather than a punching bag in his fight with the mayor.