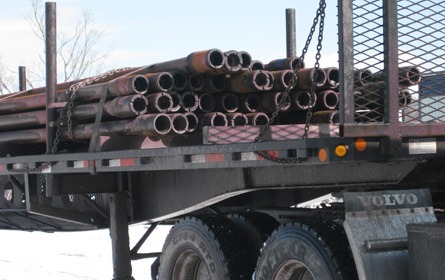 Photo by William Swet
Critics say hydraulic fracturing has caused damage to communities and the environment in neighboring states. Here, a truck near Dimock Penn., carries pipe to be used in the extraction of natural gas.

(For an opposing viewpoint, see The Cuomo Administration Strikes a Balance by S. Dennis Holbrook of the Independent Oil and Gas Association of New York.)

To his credit, Gov. Andrew Cuomo, who had a strong environmental record as attorney general, has stated: "New York state must ensure that, if and when the shale's natural gas is obtained, it does not come at the expense of human health or have adverse environmental impacts."

And the governor's talented commissioner of the Department of Environmental Conservation, Joe Martens, insists that he is seeking to adopt the toughest and best regulatory safeguards in the nation. Martens argues that such regulations -- along with vigorous and fully funded permitting and enforcement operations -- will protect New York’s safe drinking water, clean air and beautiful landscapes.

That is indeed an ambitious goal.

But whether it can be achieved is very much an unanswered question.

On the Fast Track

Even under the best of circumstances, insuring that fracking can be done in a way that protects public health and the environment poses enormous challenges. In states around the country, we have watched the consequences of fracking-gone-wrong unfold -- from contaminated drinking water to destroyed property values to communities transformed into industrial zones.

In New York, the state's latest actions -- procedurally and substantively -- raise further doubts as to whether the state will be able to successfully deliver on its promise to advance fracking in a way that is environmentally sensitive and safe.

One thing is clear -- fast-tracking the process is not the way to get there.

This timetable undercuts the spirit and intent -- if not the letter -- of New York's landmark environmental review law, which is designed to provide information that decision-makers need to knowbeforethey formulate policies. And combining the environmental review process and the rule-making process creates a hardship for concerned citizens and others who have been given little time to meaningfully review and comment on both the massive environmental study and the complex proposed regulatory program.

To remedy this failing, the state should, at a minimum, extend the comment period on the proposed fracking rules for 60 days, until Feb. 12.

Along with these procedural missteps has come a boatload of unresolved substantive issues and unanswered questions.

Gaps in the Plan

Take, for example, the proposed provisions for safeguarding the unfiltered drinking water supplies of New York City and Syracuse from the dangers of fracking. The proposal wisely places the forested watersheds of these two drinking water systems off-limits to well-pad development, correctly calculating that the economic and environmental risks to these unfiltered systems is simply too great.

But rather than fully safeguard these systems, which supply water to more than half the state's populations (including all of New York City), the proposal leaves gaping holes in the rules' protective blanket.

A case in point, highlighted at recent City Council hearings by Environmental Protection Committee chairman James Gennaro, is the stunning lack of protection for the aqueducts and tunnels that carry water from the reservoirs to our homes and apartments. These tunnels fall outside of watershed boundaries and their surrounding lands would be open to drilling. But such infrastructure is vulnerable to both structural damage and pollutant infiltration from fracking activities.

For these reasons, consultants to New York City who studied the issue called for a seven-mile protective buffer around the city's upstate water tunnels. In contrast, the state's current proposal provides for only a soft protective zone less than a quarter of a mile around these essential water structures.

Then there are the unresolved issues. Chief among them: What is the state's plan for safely disposing of the hundreds of millions of gallons of contaminated fracking fluids and other hazardous wastes that would be generated every year in New York if big oil and gas companies are given the green light?

The environmental study fails to answer that question satisfactorily.

Yet another shortcoming of the state's fracking study is its failure to fairly explore the alternative of advancing a drilling program as a demonstration only -- as a pilot project of sorts, with permitting limited to a small number of wells, at least for the first three years.

Such an approach would enable the state to prove to the public that it might be possible to operate a carefully controlled drilling program in a manner that would effectively safeguard New York's communities and environmental resources. Under this alternative approach, the state would select only those drilling companies with the best track record, who agree to implement the most stringent environmental controls, and who are willing to work with communities to address their local concerns and special needs.

Nobody knows whether such a "demonstration project" would prove that fracking can be done safely in New York. But we do know that the business-as-usual, "trust us" approach to fracking has caused unacceptable environmental and community harm all over the country, including right next door in Pennsylvania. And we know we don't want those errors to be repeated in New York.

The Cuomo administration still has time to reconsider its approach and to propose a more limited, more protective fracking plan.

But in order to do that, it must pump the brakes on the Fracking Express.

Eric Goldstein is a senior attorney in the New York office of the Natural Resources Defense Council and director of New York City Environment.