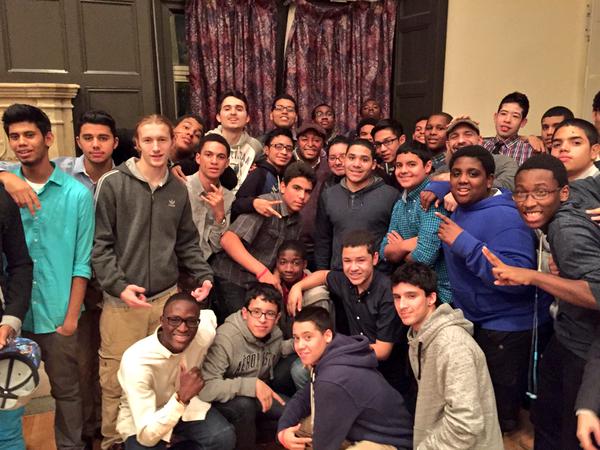 There is no question that black men face substantial barriers to employment. As the demand for men with limited educational credentials has declined, firms increasingly screen out all men they perceive are from at-risk groups: those with criminal records, those who live in high-crime areas, and those who cannot provide reliable personal recommendations for their employment worthiness. As a result, high black joblessness appears among teenagers and persists among those in their prime working years. In particular, the employment rate among black men aged 25 to 34 years old is 70 percent, in contrast to 83 percent for similarly-aged white men.

In response, there are an increasing number of programs to prepare at-risk youth for the world of work. In Brooklyn, CAMBA has done very positive work with kids in the transfer high schools - schools for students who had previously dropped out or were significantly behind in credits; United Neighborhoods gains employment for disconnected youth – those who are neither in school nor in paid employment; and organizations like STRIVE work with those leaving the prison system. There should be greater funding for these successful initiatives.

Many observers believe that one of the barriers black youth face is the racial disparities in school discipline. In New York City, black youth comprise 26 percent of the student population but 53 percent of suspensions. Generally, commentators focus on what can be done in the high schools and certainly, in many cases, alternatives to suspensions are needed. But changes in high school disciplinary policies or expanded work readiness programs for at-risk youth can only do so much. It would be much more effective to intervene early so that fewer black males reach their teen years with deficient academic skills and/or significant attitudinal problems that put them at risk for failure in the educational system and in the workplace.

Behavioral problems appear at an early age. Black children comprise 18 percent of preschoolers but 48 percent of those suspended multiple times. The evidence strongly suggests that an important source of these behavioral problems is the fluid family environments that many black disadvantaged children experience. With less stable male income, blacks have less stable romantic relationships.

Over their lifetime, 59 percent of African American mothers, 35 percent of Hispanic mothers and 22 percent of white mothers reported having children with more than one partner.

Kathryn Edin, a professor and researcher on women and poverty, noted, "When a mom moves from one relationship to another – playing gatekeeper with the biological father while putting her new boyfriend into the dad's role - she puts her kids on the 'father-go-round.' What about fathers? They, too, find themselves on a 'family-go round,' having kids by other women in a quest to try to get what they long for – the whole father experience."

These changing relationships create stress for children for a number of reasons. First, many children are abandoned by their biological father when he moves on to a new romantic relationships. A Pew survey found that over half of fathers did not share a meal with their noncustodial children in the last four weeks; less than one-third did homework with them.

Second, children must adapt to a new man in the house; someone who sometimes brings his employment frustrations into the home.

Surely one of the outcomes for many children is to act out in school. This is especially the case for young boys who have additional school problems and stresses.

When these young children exhibit behavioral problems in schools, in many situations school disciplinary actions are warranted. Educators know, however, that disciplinary actions alone will not change the situation: counseling for both the child and the adults in his family would be more constructive. The problem is that counseling resources are not available in many K-5 settings. Even when parents are amenable, the referrals put them on waiting lists and even out-of-class resources for troubled children are often not available. Indeed, in too many cases, the only way that these troubled children gain resources is if they are (mis)placed in special education classes.

Reducing suspensions without providing the necessary resources to aid in the transformation of the home environment will be of limited value. Many more resources are necessary to respond in a holistic approach when children act out - and Mayor Bill de Blasio's approach to failing schools points in the right direction. Counseling and social work resources should be a priority if we really want troubled children to succeed.

***
Robert Cherry is Stern Professor at Brooklyn College and the CUNY Graduate Center.