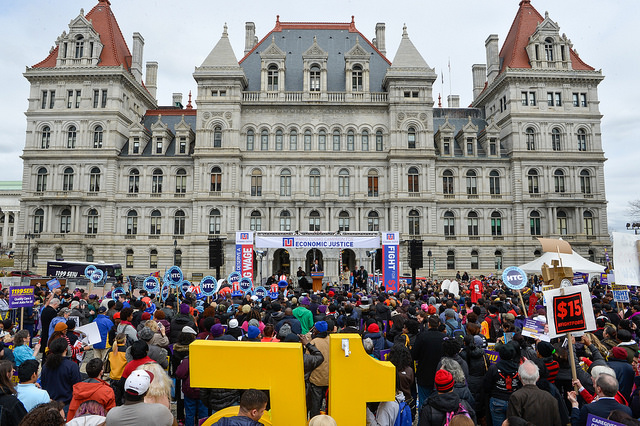 Gov. Andrew Cuomo and legislative leaders finished protracted and messy end-of-session negotiations on Friday night -- one day after the scheduled end of legislative session -- not with the traditional celebratory press conference, but with a series of press releases. Sent to reporters as bills were still being negotiated, printed, and voted upon Friday night, Cuomo’s public schedule for Saturday put him in the New York City area with no events.

A press release announcing an agreement on a five-point “ethics reform plan” was sent out at about 7 p.m., though actual bill language wasn’t available until about 1:45 a.m., with legislators expected to vote on the varied measures immediately thereafter.

Legislators from both houses, many somewhat delirious after consecutive late nights of session followed by early mornings -- some of whom had even taken to sleeping at their desks -- learned of outlines of deals second- or third-hand. Negotiations were largely held by Cuomo, Republican Senate Majority Leader John Flanagan, Democratic Assembly Speaker Carl Heastie, and Independent Democratic Conference head Jeff Klein, with the three legislative leaders reporting back to their conferences.

A long evening at the Capitol building did not end until after 3 a.m., with a strong sense of disorganization and confusion throughout. Even without knowing much about what they were voting on, state Senators voted through the ethics package 60-2 and the "big ugly" mash-up of other bills 61-1.

For the public, many legislators and watchdog groups, this year was defined by the corruption convictions of former Senate Majority Leader Dean Skelos and former Assembly Speaker Sheldon Silver, as well as the broad federal investigation into Cuomo’s economic development programs across the state. However, legislators resisted any major reforms that would directly address the issues involved in those cases.

Instead, the Friday deal agreed to by Cuomo and legislative leaders addressed the use of independent expenditure committees; tightened rules on what would be improper coordination between candidate campaigns and committees; did away with a rule from the Joint Commission on Public Ethics that forced lobbyists to disclose their interactions with newspaper editorial boards; and will begin the process of amending the state constitution to strip lawmakers convicted of corruption of their pensions - this measure is an amendment to the state constitution and will therefore have to be passed by a second consecutive state legislature (following this fall’s elections), placed on the ballot, and approved by voters, likely in November, 2017.

Also included is a measure to increase disclosure by 501(c)(4) organizations that take money from 501(c)(3) organizations, a move seen by many as an attack on good government groups that use the latter for funding their advocacy work. Cuomo administration officials have repeatedly referred to good government groups as “shadow lobbyists” while the governor has regularly worked with them on ethics and campaign finance reform measures.

The five-point plan falls significantly short of what Cuomo outlined in his January State of the State speech and of what good government groups and reform-minded legislators have been calling for. In a twist of irony, the ethics related bills were given almost virtually no public review before being moved through.

“For the first time, independent expenditure groups and PACs will be required to adhere to unprecedented disclosure requirements, and New York will have the nation’s strongest rules defining and governing coordination and independence,” Cuomo said in a statement.

Missing from the ethics deal are many of Cuomo’s major proposals he made in January - proposals that include limiting outside income for legislators; closing a loophole that allows corporations to subvert campaign contribution limits by creating multiple LLCs; and measures to prevent campaign accounts controlled by political parties from taking in unlimited donations.

Meanwhile, New York City issues remained major sticking points as leaders hashed out their final deal. It appeared that a breakthrough was reached after Mayor Bill de Blasio told Heastie, de Blasio’s main Albany ally, that he could live with another one-year renewal of mayoral control that mandates the city spell out exactly how much money it is spending on each school.

That renewal is a blow to de Blasio even though the administration calls it as a victory - de Blasio was looking for mayoral control to be made permanent, or at least extended for three years. “This extension is a recognition of the unprecedented progress and achievements mayoral control has delivered for our school system,” Austin Finan, a spokesperson for de Blasio, told The Wall Street Journal.

The deal clearly weakens the city’s independent control of schools and sets de Blasio up for another renewal fight next year when he will be up for reelection. It also empowers charter schools, which de Blasio has often been at odds with to the chagrin of Cuomo and Flanagan, to seek authorizations from SUNY Charter Schools Institute, which is seen as very pro-charter.

One positive for de Blasio was that the Senate approved some of his CUNY nominees and approved two of his MTA nominees, Veronica Vanterpool and David R. Jones, who had been waiting for over a year for confirmation. City Council Member Ydanis Rodriguez, the third of three de Blasio nominees to the MTA awaiting confirmation, had not been confirmed at the time this article was published.

Another major city issue came to something of a resolution on Friday night as Cuomo and legislative leaders announced they would make available $570 million in capital funding for supportive housing for homeless people. On Thursday a figure of $150 million was floated out of the $2 billion in funds set aside for supportive and affordable housing construction and maintenance in the budget, but not yet allocated. “The Governor's pathetic offer to provide a tiny fraction of what he promised underscores the shallowness of his commitment to housing our homeless neighbors,” said Shelly Nortz, executive director for policy at the Coalition for the Homeless, in reaction to the offer. Groups were not much happier with the $570 figure released on Friday, they want to see the full $1.9 billion allocated by Cuomo, Heastie, and Flanagan.

Deals announced leading up to and on Friday also included moves to improve safety at railroad crossings; fight heroin and opioid addiction; provide $50 million in additional capital funds to CUNY and SUNY; accelerate construction at the Javits Convention Center, and more. Legislation legalizing and regulating daily fantasy sports was passed through the Assembly Friday afternoon and made its way, somewhat surprisingly, to the Senate floor after 2 a.m., where it was passed. It will now go to the governor's desk.

This end-of-session “big ugly” package of legislation appears to have occurred in similar fashion to this year’s budget, with an agreement reached because the parties walked away from the negotiating table. In both cases, as is the tradition, bills were passed with such little review by legislators, advocates, and journalists alike that days of unpacking are ahead.

Not dealt with before the end of session was renewal of the 421-a real estate property tax break meant to spur afforable housing development in New York City and expansion of car-hailing apps like Uber and Lyft to Albany and other parts of the state.

Legislators will now return to their districts to run for reelection facing polls that show voters around the state want sweeping government ethics reform. Cuomo will likely look to bounce back from what has been an up-and-down year that saw him celebrate the political high of winning passage of a $15 minimum wage plan and paid family leave that earned him national attention and accolades from the left yet have members of his inner circle and his administration subpoenaed in a corruption probe. Much of the focus of the months ahead will be on that federal investigation and how the fall elections affect which party controls the state Senate.