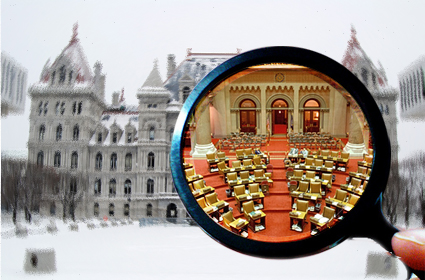 With their majority finally solidified, the State Senate Democrats last week passed rules changes, which they say, are designed to create more legislative transparency and to balance the power rift between the majority and the minority. Even though the Democrats had moved on reform issues after years of pleading for the same courtesy from the Republican leadership, their actions were greeted with derision by some and a tempered optimism by others.

The changes reverse rules instituted by the Republicans in 2001. Good government groups like the Brennan Center for Justice hope that such amendments will lead to more transparency in the Senate, give the public more input into the legislative process and allow members of both the majority and minority to freely propose and debate legislation.

What the Rules Do

One of the new changes will allow any senator to co-sponsor a bill without permission from the author. Previously, majority senators could prohibit members of the minority from being co-sponsors of their legislation.

Another change will allow senators to file "motions of discharge" to force bills out of committee after 20 days. Previously senators would have to wait 60 days. The longer waiting period allowed the majority to easily block a bill sponsored by the minority by keeping it in committee. The minority could ask for a floor vote, but votes against allowing the legislation to move forward were not a matter of public record.

The rules changes also promote the use of technologies such as the Internet to give the public greater access to the legislative process.

These changes will all expire at the end of the year and will likely be replaced by changes recommend by the newly established Senate bipartisan temporary Committee on Rules and Administration Reform. The committee will have 90 days to hold hearings and make recommendations on rules changes.

Good government groups have said that, while they would have liked more aggressive action, they are happy that reforms were made and are optimistically awaiting the recommendations of the temporary Committee on Rules and Administration Reform.

Sen. Daniel Squadron, who campaigned on reform issues, said, "I am pleased we have made real changes. It might not be everything but it is a real start."

Some Democrats could not help but giggle. One Democratic senator described the Republican's change of heart as "a convenient conversion," and the "height of political theater and cynicism." "At least we have put the ball on the field," the senator said. Republicans had moved on rules changes in the past. An amendment in 2005 left Democrats displeased.

Republicans have made a fuss over amount of money they will receive to run and staff their offices. They have been pushing legislation that would require equal resources for every legislator. Majority Leader Malcolm Smith responded to the complaints on Monday by guaranteeing that every senator would have a budget of at least $350,000. During the years of Republican control, some Democratic senators were allocated less than $300,000. One staffer said his office never got more than $350,000, and he knew of senators who didn't get $200,000. "In New York City," said the staffer, "that meant two staffers."

The treatment they received from the Republican majority remains fresh in the minds of Democratic senators and their staffers. They don't need to think back far to remember inconveniences like having simple supply orders -- for items from toilet paper to Styrofoam cups to furniture and paper -- take weeks to arrive, or making do on a budget one quarter the size of their Republican counterparts. They can remind themselves of bigger issues such as being effectively powerless to challenge the majority party on legislation or having their mailings to constituents censored.

Some Democratic staffers take a bit of satisfaction in seeing the new minority in their old shoes. One called the Democrats' treatment at the hands of the Republican majority "insulting and repressive." And yet he said he fully expected the new majority to aggressively pursue rules changes -- to increase the ability for the minority to introduce and challenge legislation and to create more transparency in the legislative process.

Another Democratic staffer said the new majority has no reason not to "do what is right." A number of staffers pointed out that, while the rules became more "repressive" as Republicans began to lose their majority over the past decade, the Democrats feel they are in a solid position with control of the Senate, Assembly and governor's mansion. As one put it, "We don't have to play those games."

While good government groups are pleased with the changes, in some cases they hope to see more decisive action. One activist said, "The fact that the Democrats didn't have a leader until last Wednesday had a major impact. They were scrambling. They didn't have an agreement in place to do anything more aggressive."

--allowing individual members to introduce legislation on the floor

--providing members with sufficient resources to fund their office and research legislation; and

-- making legislative records immediately available to the public on the Internet.

Susan Lerner, executive director of Common Cause, said she feels confident the Democratic majority will address these issues, and noted that a number of members of the majority have "spontaneously expressed their deep interest in reform."

The list of members named to the rules and administration reform committee gives some reform proponents hope, as it includes a number of senators known for their commitment to rules changes. The committee is co-chaired by Democratic Sen. David Valesky and Republican Sen. John Bonacic. As of press time the others are Squadron, Andrea Stewart-Cousins, Jeff Klein, Jose Serrano and Liz Krueger. All but Stewart-Cousins, who is from Westchester, represent New York City districts. Minority Leader Dean Skelos will sit on the committee along with fellow Republican Senators Joe Griffo and George Winner.

However, other issues could interfere with the temporary committee. As Squadron pointed out, "Ninety days during the biggest budget season is not a lot of time."

Meanwhile, Krueger may not remain on the committee. According to several sources, she thinks her work as vice chair of the Finance Committee might interfere with her ability to play an active role on the reform committee and so she has asked to be replaced. An official announcement will likely be made in the near future.

Krueger's absence would concerns activists, as she has consistently been one of the most outspoken members of the Senate on the issue of rules reform. Krueger filed a lawsuit against the majority over alleged censorship in 2006. According to Krueger and co-plaintiff Republican Assemblyman Thomas Kirwan, then Senate Majority Leader Joseph Bruno and Assembly Speaker Sheldon Silver censored outgoing constituent mailings-making it impossible for members of the minority party to criticize the majority.

Lerner said that while a number of members of the temporary committee are strong advocates for reform, "I think her [Krueger's] colleagues would agree she has spent the most time delving into the issue."

Of greater concern to many advocates, though, are issues beyond the purview of the committee including campaign finance reform, redistricting and the way elections are held. Some insiders said say they expect the Senate to tackle those issues after the budget issue is addressed.

Lerner said she has one challenge for the committee on reform as well as for the Senate as a whole. She would like to see the Senate adopt the committee's rules proposals this year rather than waiting for the rules that were adopted this year to expire. She does not want the issue to get lost during what is sure to be a hectic legislative session.

That request is something committee member Squadron does not think is unreasonable, "We can't wait more than a year. We are not some task force that will make recommendations that will wind up sitting at the bottom of a drawer. The Senate will take action on our recommendations."