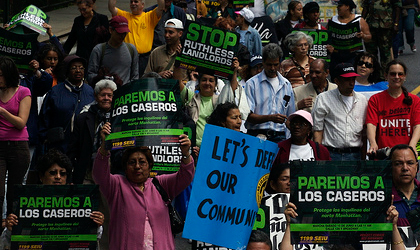 Michael McKee, the treasurer of the Tenants Political Action Committee, worked hard to secure a Democratic majority in the State Senate. Besides making substantial donations to the campaigns of Democratic Senate hopefuls last year, McKee said, more than 50 people from Tenants PAC worked to elect Joe Addabbo in his bid to unseat Sen. Serphin Maltese.

"We knew that as long as the Republicans were in charge we couldn't get the simplest, Mickey Mouse bill out of the Senate," McKee said. According to McKee, Senate Republicans received a steady flow of cash flow from the real estate industry that "kept them in power"and so had no interest in passing legislation that would be favorable to tenants.

Addabbo's campaign was successful, and the Democrats seemed set to become the Senate Majority. McKee expected the Senate would then easily pass housing legislation the Democratic-controlled Assembly had moved on year after year. Now, though, dissension within Democratic ranks has cast doubts over whether 2009 will be the banner year for tenants McKee and other advocates had hoped.

In general, housing advocates want to strengthen rent control and reverse many of the measures to weaken it that were enacted by the New York City Council and the Republican-controlled state government over the last two decades. The expected legislation includes A02005, which would would undo the law that allowed landlords to remove rent regulation on vacant apartments on which the rent had reached $2,000 a month rent. Advocates say the passage of A02005 would be a triumph for tenants since it would also restore to rent regulation some apartments that had been decontrolled.

Proponents of the bill in the Assembly say that rent decontrol encourages landlords to harass and mistreat tenants in rent controlled apartments to drive them out and then rent the apartments at market rates. Rising rents also make it difficult for tenants with regulated apartments to even consider moving. Meanwhile landlords have an incentive to lie about the pricetag of renovations on vacant apartments to artificially raise the value of the unit.

Maggie Russell-Ciadri, executive director of Tenants and Neighbors, said that ending decontrol is the single most important issue for tenant advocates. Experts say more than 50,000 rent-regulated apartments were lost between 2005 and 2008 because of decontrol.

Returning rent regulation to the city by repealing the Urstadt law has been a priority for many tenants' advocates for years. The Urstadt law, enacted in 1971 by Gov. Nelson Rockefeller, took rent regulation out of the hands of New York City and gave it to the state. Therefore legislators from districts without much rental housing can influence the price of apartments in New York City. This year, though, advocates are less focused on repealing the Urstadt laws than they were in previous years and have made abolishing decontrol their focus.

Other bills before before the Assembly would address other tenant concerns. One, A1928, would make rent increases for major capital projects a temporary surcharge so that tenants could pay off the costs of improvements rather than having permanent increases in rent. Bill A2002 would increase penalties for landlords who harass their tenants.

Bill A168 would limit a landlord's ability to claim apartments for the use of their family. Now landlords are able to push tenants out of their apartments and some have been able to empty entire buildings to create luxury mansions. The bill would limit recovery for family use to one apartment. Other bills in the Assembly package are designed to close loopholes to keep landlords from drastically raising the rates of their rent controlled apartments.

Progress on these issues now seems unlikely to proceed as smoothly as tenants groups had hoped. Thanks to hard bargaining by three renegade Democrats who threatened to bolt the party -- the so-called gang of three -- the landscape in the Senate has changed from what many anticipated on Election Day. Sen. Liz Krueger of Manhattan, a passionate supporter of tenants' issues and the ranking Democratic member of the Housing Committee, was assumed to be in line for chair. She was bumped in favor of gang of three member Pedro Espada of the Bronx.

Housing advocates have voiced their displeasure at Espada's nomination, with some calling the gang of three "the Manchurian Democrats."

McKee said that Espada is simply the wrong person to chair the Housing Committee. According to McKee, when Espada served in 1993 as the ranking Democrat on the committee, he was "not only unresponsive" but also "destructive."

However, McKee said, "it's unclear how Espada will perform as chair" and how much it will matter. McKee said that he is sure the Democratic Senate, especially Majority Leader Malcolm Smith, realizes tenants' issues are "life and death" to them. In light of that, McKee expects the Democratic leadership will make sure the Senate does away with rent decontrol regardless of Espada.

Responding to complaints from tenant advocates, Espada said, "Maybe they don't know me." He added that the Section 8 subsidized housing program and tenant-protection issues are "very close to me."

Espada said he grew up on public assistance, has experience being homeless and worked as a tenant organizer. All this, he said, makes him sympathetic to the plight of the working family. "I'd like to meet an advocate who has experience that I don't have," said Espada. "I would ask for their patience and cooperation."

Espada seemed ready to take on broader issues as well. "It's a really exciting time in America," he said, explaining that he expected a "new urban reality," thanks to the Obama administration. "It's time to think beyond brick and mortar housing. We should be thinking out of the box. We should revisit the complete policy of how we assist cities."

One way to expand the supply of housing, he said, would involve making it possible for people to live upstate and quickly and affordably commute downstate. "We need to talk about how we get workers in Manhattan to Sullivan and Ulster counties to live there. There are ghost towns there now. "

As for his loyalty to the agenda of the majority leader and the Democratic majority, Espada said, "As a whole there is a clear synergy, but the idea that we should all be on automatic pilot is ridiculous. We are going to have to take each issue as it comes--not just draw up battle lines, but look at the merits of each issue."

Meanwhile in the Assembly

As housing advocates wonder exactly what they can expect from the Senate, their old allies in the Assembly appear more than ready to push ahead as they have in the past.

McKee has grown accustomed to seeing the Assembly take action on tenants issues while knowing the legislation will die because of inaction by the Senate. This year he has considerably more hope, but there is still a great deal of uncertainty.