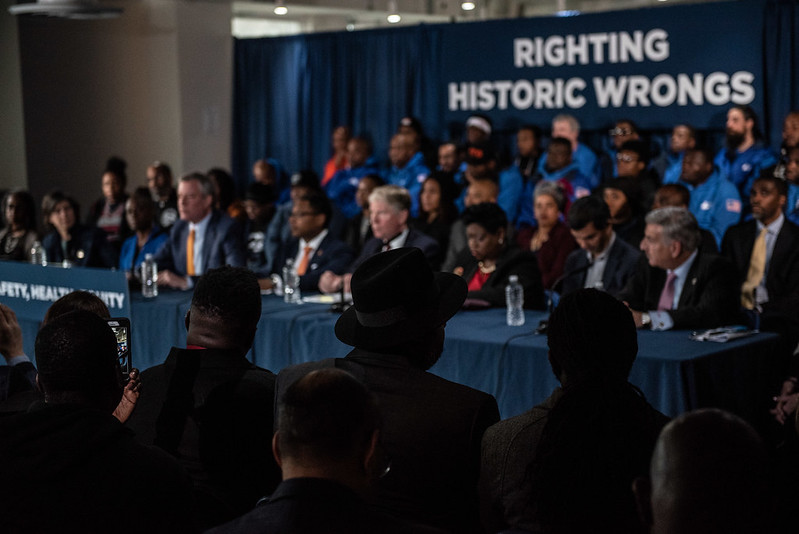 Because of the coronavirus crisis, New York is facing a massive budget hole and calls for innovative solutions to dig us out of this fiscal crisis. While Governor Cuomo recognizes the tremendous tax windfall that would come with the legalization of adult-use cannabis, this is about more than just tax revenue.

The reality is that New Yorkers will face a mounting racial and criminal justice crisis without a more equitable plan like State Senator Liz Krueger and Assembly Majority Leader Crystal Peoples-Stokes have put forward in their Marijuana Regulation and Tax Act. The governor’s plan offers less in terms of racial equity and some of his proposed penalties for cannabis-related offenses will only perpetuate the very problems that criminalization has caused.

Legalization must mean redirecting law enforcement resources to address more serious crimes, expunging records for millions of New Yorkers unfairly ensnared in the criminal justice system, and the creation of tens of thousands of new jobs. Cannabis licensing and sales can be utilized in a way that disrupts the cycles of marginalization, violence, intergenerational poverty, and trauma that have plagued communities of color for decades.

Unfortunately, these potential benefits quickly evaporate with the wrong policy. Any legalization plan needs to ensure that the communities that have been and continue to be disproportionately impacted by criminalization benefit from legalization through reinvestment, as well as opportunities to participate in the legal market. It should not further criminalize the use of cannabis, like the governor’s current proposal, which makes it a class A misdemeanor with no caveats to sell, exchange, or give an individual under the age of 21 any amount of cannabis. That means that, if arrested and prosecuted, a 22-year-old who shares a joint with a 20-year-old could face up to a year in prison.

If we are serious about rectifying the harms that criminalization has caused, then we need to stop throwing the book at low-level drug offenders. These policies have disproportionately targeted Black and Latino communities for decades, and even as recently as 2019 the vast majority of people arrested in New York City for low-level offenses were Black or Latino. More than 1,300 of the 1,400 marijuana arrests across the city that year were people of color despite the fact that white people are known to smoke marijuana at similar rates.

Where the money goes matters too, especially in an industry projected to generate more than $1 billion in sales and $350 million in annual tax revenue. The majority of this new revenue—not less than one-third of it, as proposed by the governor—should go to the communities adversely impacted by the War on Drugs, and a just licensing system is equally as important.

A licensing process that prioritizes Minority- and Women-Owned Business Entities (MWBEs) would be transformative for Black and Latino New Yorkers, and help create equity in communities that are all too often locked out of opportunities since they lack access to capital, credit, real estate, or the ears of people in power. Offering incentives and low-interest lines of credit to MWBEs (which the aforementioned legislation in the Senate and Assembly does) ensures they can take part in this once-in-a-generation opportunity. But we also need to include statutes that prevent the wealthy from using their influence, their armies of attorneys, and their vast reservoirs of cash to game the system at the expense of honest entrepreneurs.

As cannabis legalization takes place, we are going to have thousands of people who will have the opportunity to earn an income with the newly-legalized industry. For that reason, the newly-created cannabis sector — alongside District Attorney offices, employers, community organizations, and labor unions, among others — can create a space that will not only generate jobs with a living wage, but they can open the doors for new apprenticeship programs that create a pathway to education and jobs for young people. Everyone from the farmer and delivery driver to the store clerk must be paid fairly and have access to opportunity if we are to create an industry built on restoring justice. Stealing any opportunities from the communities that need them most isn’t just corrupt, it’s also a crime that needs to be adjudicated. As the head of the Construction Fraud Task Force in the Manhattan District Attorney’s office, I went after big companies that abused their power to exploit the MWBE system and stole workers’ wages and I partnered with the community and labor unions, and we must do the same when it comes to marijuana too.

New York is living through a pivotal moment. We have an obligation to reinvent ourselves and lead in driving meaningful change, and the Marijuana Regulation and Tax Act does just that. New York can lead the country and Manhattan can lead New York. We need to take a much broader view of economic empowerment and look at the full range of social institutions that empower advancement and those that compound the problem, and we need to act now.

***
Diana Florence is a candidate for Manhattan District Attorney. On Twitter @dianajflorence.