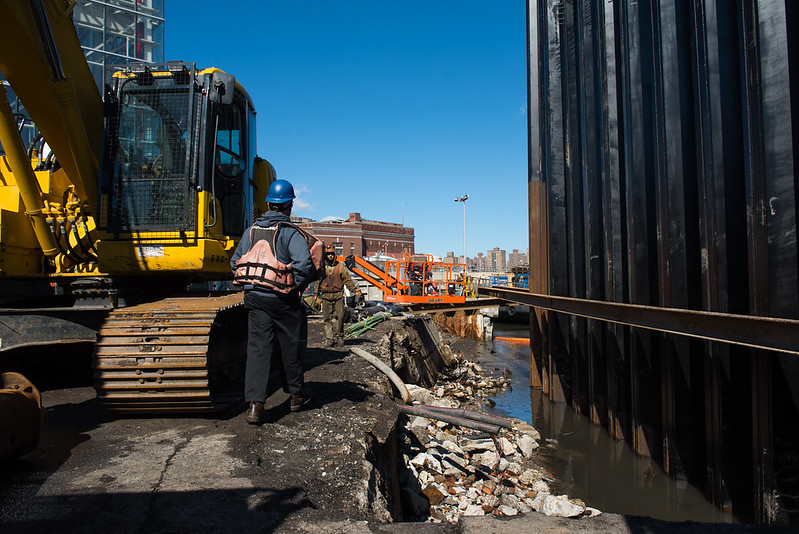 Without the network of parents that I have met at my daughter’s school in the historic South Street Seaport, I might never have heard about a real estate developer’s purchase of a parking lot directly across the street that was once the site of the largest thermometer factory complex in the country.

This parking lot is located at 250 Water Street and sits adjacent to the entrances of PS 343 Peck Slip and the Blue School, which is another school that serves pre-kindergarten through fifth-grade children.

I wouldn’t have given the lot a second thought, until a parent told me that the developer – the Howard Hughes Corporation – applied the site to the New York State Department of Environmental Conservation’s Brownfield Cleanup Program.

The words “Brownfield Cleanup” immediately brought to mind nuclear waste sites and decommissioned oil fields, making me question for the first time what was actually under that parking lot.

Alongside other parents and community members, our research uncovered a startling fact: the parking lot at 250 Water Street was the location of several thermometer factories. At one point, this was the largest thermometer factory complex in the entire country. Factories that allowed harmful mercury to seep into the topsoil due to lax regulations when they were in operation. Right now, the parking lot “caps” the mercury, protecting the community from harm, we have been told by state officials. Without this cap, toxic chemicals would be released into the community.

Developers favor the Brownfield Cleanup Program because it releases them from liability if contamination spreads to neighboring sites – in this case like my daughter’s school. If such contamination occurs with a brownfield site, the state assumes liability. And of course, the developer also receives considerable tax credits for using a BCP site. Given past stories of government remediation of toxic sites, this all gives us no comfort.

I have no doubt that developers would like to prevent young children from getting sick. But I also know that as profit-maximizing entities, their incentives are not necessarily aligned to take the measures needed to protect a community if it costs them more time and money in the short-run.

The NYSDEC does provide a Technical Assistance Grant (TAG) of $50,000 for communities to do their own research – money that could be used to hire an environmental engineer or a lawyer to represent the community – but a TAG can only be applied for once the scope of remediation is already determined, giving the community no power to protect itself. Also, a TAG must be deemed necessary by both the NYSDEC and the private corporation (a law that must be amended).

In our own community fight, as the current assemblywoman was unable to do so, I worked with the Manhattan Borough President’s office to help secure $50,000 of funding from the private real estate developer at 250 Water Street. The funding has been used to hire a physical geologist as an independent community monitor, who has already fundamentally altered the course of the development. Most communities aren’t as lucky to be able to obtain this type of support but deserve the right to be protected.

Our state government in Albany should amend New York State’s Environmental Conservation Law to allow communities to apply for the Technical Assistance Grant as soon as a project is approved to the Brownfield Cleanup Program – not after the Remedial Investigation Work Plan (RIWP) is concluded. Lawmakers can close this ‘developers first, communities last’ provision by amending Article 27, Title 14, Section 27-1417 of the Environmental Conservation Law.

In New York City alone, there are over 200 brownfield cleanup sites currently active. Where are these sites predominantly located? In working class communities like Chinatown, the Lower East Side, Morningside Heights, and East New York. Amending Environmental Conservation Law in this manner would be a clear victory for environmental justice.

No one should tolerate their children or neighbors being exposed to life-threatening toxins, and we deserve elected officials who will fight to protect their constituents, not sell them out to corporations.

***
Grace Lee is the founder of Children First, a parent-led activist group fighting for the safe cleanup of a toxic site located in the South Street Seaport. She is a candidate for the New York State Assembly, 65th district. On Twitter @graceleefornyc.