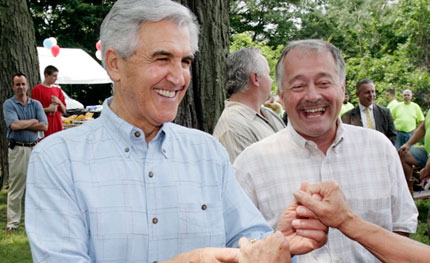 Photo from joebruno.org
Joe Bruno (left) in his pre-indictment days

Spend time in New York's Capital Region and you will be hard pressed to go very far without seeing former Republican Senate Majority Leader Joseph Bruno's name -- and not because of his recent eight-count indictment on federal corruption charges.

If you arrive in the region by air, one of your first few steps may lead you past a bust of Bruno at the Albany International Airport. If you catch a minor-league baseball game, you will probably visit the Joseph L. Bruno Stadium. During a walk through Saratoga Spa State Park you will likely encounter the Joseph L. Bruno Pavilion. The list of buildings that bear the former senator's name goes on and on, from a lobby in a local YMCA to a biotechnology research center and a town park.

Local leaders, Democrat and Republican alike, bowed to Bruno whenever they could to secure funding for their own pet projects or to get legislative favors. Bruno famously responded to questions about whether it was fair that upstate New York benefited so greatly from his power, "It's been our turn these last dozen years."

Bruno had a leadership position and as one of the three men in the room wielded large amounts of power. But the types of questions that now face Bruno have confronted many New York's politicians. Most have not been indicted, but concern about their behavior and their use -- or abuse -- of their offices has arisen nevertheless.

A number of activists in New York say this atmosphere of impropriety -- and constant suspicion of impropriety -- must end. With that in mind they have proposed a package of measures designed to change the way business is conducted in the state capital.

A Call for Changes

For his part, Bruno faces a maximum sentence of 20 years in prison and up to a $250,000 fine on charges that he traded his influence in the state legislature for financial gain. Among other accusations, the indictment alleges that Bruno's financial disclosures made from 1993 to 2005 did not include all required information and had misleading and false information. Those filings are required under the state's Ethics in Government Law. As Senate majority leader, Bruno had the power during most of those years to control the ethics committee that would have policed the transgressions Bruno is alleged to have committed.

At least some of the changes offered by good government groups would address that. The organizations want to set new guidelines that they think would reduce the chances that politicians will use their positions to enrich themselves financially and also would give constituents a clearer look into how influence is traded in Albany. They want to establish a new ethics commission that will oversee both the legislative and the executive branches. And they want more transparency and stricter guidelines on the use of campaign contributions.

Last week, members of New York Public Interest Research Group, Common Cause New York, the League of Women Voters of New York State and Citizens Union (whose sister organization is Gotham Gazette's publisher) gathered in Albany to ask for these changes and to challenge the new Democratic leadership in Albany to keep its promises to enact reform.

Blair Horner of the New York Public Interest Research Group said that politicians should be falling over themselves to do away with the perception that hangs over the capitol -- the perception that just about everyone in politics is a corruption scandal waiting to happen.

That does not seem to have occurred. Instead, the reaction was not overwhelming, according to Common Cause's Susan Lerner. DeNora Getachew of the Citizens Union said that she felt "this was just the beginning of a conversation."

Richard Azzopardi, a spokesperson for Sen. Craig Johnson, who chairs the committee on Investigations and Government Operations, said the proposals are "very thoughtful."

The Cloud of Suspicion

During interviews following his indictment, Bruno portrayed himself as an honest man who "needed to make a living." But take the time to stand in the shadow of the baseball stadium locals affectionately call "the Joe" and ask residents of Bruno's former district if they were surprised at Bruno's indictment. They will look at you like you've just asked them if they are surprised that leaves fall during autumn. They might say something such as, "He is a New York politician, right?"

Horner said an oversight body to police ethics for both the executive and legislative branches could give New Yorkers more confidence in their representatives' integrity. Currently, each branch has its own separate ethics watchdog. The Legislative Ethics Commission is made up of legislators from both houses. On the executive side, the Commission on Public Integrity has seven members -- all appointed by the governor.

In other words, officials basically police themselves. Horner, for one, thinks that presents a problem.

"Self regulation doesn't work," he said. "The system we have in New York for regulation is unusual in the entire country." Only four other states have similar oversight boards, 29 other states have one independent board that oversees the legislature and executive branches.

The Commission on Governmental Ethics, as proposed by the groups, would oversee both the executive and legislative branches of state government. It would have nine individuals. The governor would name three, and the comptroller, the attorney general, the speaker and minority leader of the Assembly, and the temporary president and minority leader of the Senate would appoint one member each. The executive director would be appointed by the chair and vice chair of the commission, who would be of different parties. Members of the commission would not be allowed to hold political office or be employed by lobbyists.

Horner isn't optimistic that the governor and legislature will approve this suggestion. "Politicians are nervous about the unintended consequences," he said. "They are loath to create an independent watchdog group. There is not enough public pressure for them to make the change. And the governor doesn't talk about it, so we will see."

In 2008, Paterson introduced a campaign finance reform bill, but critics say he has not pursued reform as tenaciously as his predecessor, Eliot Spitzer. "We want to not dictate campaign finance reform. We want to really persuade legislators that it is really the root of the dysfunction we have in Albany," Paterson has been quoted as saying. "We'd like to come to consensus with the two legislative bodies about curtailing it."

Paterson also has not adhered to the $10,000 ceiling on individual contributions that Spitzer imposed on himself. The governor said he would operate under the existing law that sets the limit for contributions at $55,900.

The Ethics Reform Act of 2009 would require politicians to publicly disclose the names of all people they do business with and the amount of money they make from those business dealings. Currently, New York State law requires that public officials disclose the names of the businesses that employ them, but they do not have to report the amount of money they make or the names of their clients. Horner said that this lack of information can make it hard for constituents to know who is influencing who and can also create an appearance of impropriety where none should exist.

"The ability to understand the legislative process is difficult at best," Pikus said. "There are factors involved in which bills are passed, member items are approved, which never see the light of day. ... And that, really, from our standpoint, from the FBI's standpoint, was the problem. We can subpoena. We can provide opportunities for individuals to come in and talk to us, but the legislative process was almost Byzantine."

The Ethics Reform Act of 2009 also would restrict the amount lobbyists and firms that receive state contracts could contribute to politicians and political committees. Lobbyists and those receiving government contracts also would be barred from serving on boards and commissions that make decisions on audits or the awarding of contracts. A database of lobbyists and contractors would be created to make it easier for the public to see who is peddling influence. And finally, laws on the personal use of campaign funds would be strengthened so that campaign money could not go to pay legal defense bills, tuition, mortgage, rent or utility bills, or dues and fees to country clubs -- as has been the case in the past.

Horner said he hasn't heard much support for these ethics reform changes this year, "The winners of the game rarely want to change the rules," he said.

He, however, does expect a renewed debate on better oversight, increased transparency and more limits on the influence of lobbyists and contractors. "If they address all three things," said Horner, "it will be a very good session.