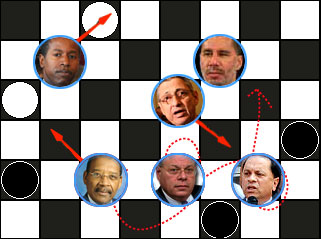 Gov. David Paterson started his first State of the State speech late. Another speech took precedence for a few minutes as new Senate Majority Leader Malcolm Smith delivered his victory remarks in the Senate chambers. When Smith finished, senators and their staffs made their way to the Assembly, and Paterson took his place on the podium and delivered his address.

Good government activists and heads of progressive groups across the state, particularly in New York City, had waited for this moment for years. They had fought alongside Democratic politicians to ensure this Senate majority would come and that their issues would finally be addressed. As of Wednesday, Albany's three men in a room were all Democrats, allegedly progressive, and all residents of New York City.

And yet, after Paterson delivered his speech, it was clear that many of those groups had not heard what they hoped to. "The state of our state is perilous," Paterson warned before launching into poetry and rallying cries. He did not issue the expected doom and gloom diatribe about the realities of the economy in an attempt to convince legislators and the public to accept the deep cuts he has proposed in next year's budget. The budget, though, was clearly the backdrop to the address and to the beginning of this session in the state capital.

Advocates around New York State are well aware of New York's fiscal crisis and multibillion-dollar deficit, but they take issue with the governor's priorities. They feel he has done little to make sure all New Yorkers share the burden and instead is balancing the budget on the backs of the most vulnerable.

They now hope Senate Democrats will deliver what the governor did not. At this early stage, though, it is unclear whether the new Senate majority will be united enough to take a stand against the governor.

On issues that are based more on policy than funding, such as changing the Rockefeller Drug Laws and a tightening control on campaign contributions, advocates do not know what the shift in the Senate will have. Will the new Senate leaders make real change -- or just become part of the legendary gridlock in Albany?

Only two seats in the Senate shifted from one party to another on Election Day. But that small movement created the groundwork for a more massive change. Committee chairs once filled by Republicans from upstate New York now are controlled by Democratic senators from the five boroughs (see chart below). And yet in at least one case, advocates are not any happier than they were before Democrats took control.

Some housing advocates had hoped ranking Democratic committee member Sen. Liz Krueger would get the post. Instead thanks to his hard-line negotiations as a member of the "gang of three," the renegade Democrats who threatened not to back Smith, Espada won the position.

Tenant advocates, citing Espada's record when he served on the Housing committee during a previous stint in the Senate, are less than thrilled. In a statement, Michael McKee, treasurer of the Tenants Political Action Committee described Espada being named to the position as an "unhappy development for tenants."

Western New York felt slighted when Democratic Sen. William Stachowski, who represents Lackawanna and part of Buffalo, was denied his bid to become head of the Finance Committee. Instead the position went to another "gang of three member," Sen. Carl Kruger of Brooklyn. Stachowski instead got the leadership on the committee on Commerce, Economic Development and Small Business.

Smith has made steps to appease upstate New York by giving some upstate senators positions of power. He named Sen. David Valesky of Syracuse vice president Pro Tempore and Sen. Neil Breslin of Albany head of the Insurance Committee. The fact still remains, though, that the real power in the New York Senate lies in the hands of a racially diverse group of politicians who represent urban districts. On paper at least, that would seem to be good news for New York City.

Senate Democrats announced most of their leaders and committee chairs his week, putting a large number of New York City representatives in key posts. Some positions still need to be decided, but here is the current list:

By releasing his budget weeks before his State of the State, Paterson changed the traditional dynamic by which governors use the State of the State to introduce their budget initiatives. On Wednesday, Paterson did not seek to break new ground but to defend his position, which was widely criticized since the budget was introduced last year. He does not seem to have succeeded.

Advocates with big hopes for a Democratic majority were left reeling after the governor's speech. "If the State of the State had a theme, it was the repeated phrase "shared sacrifice." But critics like Billy Easton, executive director of the Alliance for Quality Education, found that disingenuous.

"The governor reiterated the call for shared sacrifice," said Easton, "but he is not listening to New Yorkers who overwhelmingly want those earning over $250,000 to share in the sacrifice by paying a little more in taxes."

"Instead of soak the rich, it's soak the middle class," wrote Dan Cantor, executive director of the Working Families Party, in a statement.

Representatives of Citizen Action New York, Campaign for Fiscal Equity and Hunger Action echoed such sentiments. They all feel that Paterson is not asking all New Yorkers to contribute equally. They suggest a Fair Share Tax that would increase the state personal income tax for those making over $250,000 a year by about 1 percent.

Paterson has described enacting that kind of the tax as a "last resort." Critics of the tax suggest that the wealthy might flee the state to avoid it. Supporters insist that is unlikely.

The Senate's position remains unclear. "They have kept it pretty close to the chest," said Geri Palast, executive director of the Campaign for Fiscal Equity. "Senate Democrats have voiced support for a millionaires tax before, but they were in the minority. Things sometimes change when it's no longer about sending a message but about governing."

Palast notes that the Assembly previously has been open to the millionaires' tax. On the other hand, Assembly Majority Leader Sheldon Silver abandoned a proposal for a millionaires tax in October last year, citing the Wall Street collapse.

The Cuts in Education

In particular many advocates see the governor's budget ax falling disproportionately on the education sector. Paterson has abandoned a program of increasing aid to needy districts and instead has proposed cutting $2.5 billion from the state's legal commitment to fund schools that are most in need. Palast, whose Campaign for Fiscal Equity sued the state to secure more state funding for New York City schools, said that Paterson's cuts to education will further delay improvement in school districts that are in desperate need of funding.

Palast said state budget could be boosted by "progressive revenue options," such as the Fair Share Tax reform. Easton said he fully expects the Senate Democrats to come through and "stand up to the governor and make restoration of the cuts to education. They supported us in the minority and we expect they are the same people they were before they took the majority."

Caitlin Dunklee, coordinator for Drop The Rock, which is working to repeal the laws, said her group "has never had so much reason to be optimistic," thanks to the governor's speech and the new Democratic majority. She said the governor has basically committed to supporting Rockefeller drug law reform legislation this year.

Paterson's promise to consider recommendations from theCommission on Sentencing Reform, which will release a report later this month, worries Dunklee. Earlier reports by the commission made no mention of Rockefeller drug law reform, she added.

The general consensus is that Paterson's speech demonstrated that he is focused on two things: managing the budget deficit and setting himself up to run for office in 2010. Inconvenient issues like the tax burden on the state's poor and middle class and reforming the very foundation of New York's dysfunctional government have been left for the legislature to confront.

Susan Lerner, executive director of Common Cause New York, feels the way a lot of activists in New York do: unsure of what she can expect from the new Democratic majority and slighted by Paterson's speech --not by what was said, but by what was not.

"Reform did not receive the barest of mentions. It was an unfortunate reflection," said Lerner. Common Cause has been pushing for rules changes in the legislature for years.

Lerner still hopes to see individual members move bills out of committee and onto the floor for discussion and vote. She also hopes conference committees would work on consolidating similar bills written separately in the Senate and Assembly.

Former Gov. Eliot Spitzer's first State of the State address was all about reform, Lerner noted. His second, she said, "at least had a throw-away line about it." She thinks that the lack of mention in Paterson's speech "was a true reflection of the governor's personal priorities. He feels he can hack it in the current system because it is a system he is accustomed to."

Lerner said she feels hopeful that rules reform might eventually be achieved this year anyway.

Senate Democrats may be more receptive to rules reform than Paterson. They recently put a greeting on the Senate Web site that says: "One of our first orders of business is to reform the rules of the Senate to give members more meaningful deliberation of legislation and foster bipartisan consensus on matters of public interest. Through revamped Senate committees members will debate and amend bills, assuring that majority and minority members share an equal footing on the Senate floor."

Senate Republicans, who are now in the minority, have been pushing for the sort of reforms that Common Cause supports. So there may be room for agreement on some of these issues.

Republicans have hinted that they think the Democratic Senate is far from united. Newly minted Republican Minority Leader Dean Skelos was recently quoted in the New York Times as saying of the Democratic majority, ""I reflected upon the fact that the last time it happened, it lasted for one year." And Skelos told the Albany Times Union, "I can guarantee you there are more factions within the Democratic conference than within the Republican conference."

Some advocates, including Palast, said they think the next four months will give New Yorkers a clearer picture of how bad the fiscal crisis is. During that time, she said, we will find out how much funding the Obama administration plans to provide the state, and we will see what sort of alternate funding proposals come about from the Senate and Assembly. And perhaps, too, a clearer picture will emerge of where the newly powerful Democrats stand and what they hope to accomplish.

That though remains weeks, if not months, away. When Blair Horner the legislative director of the the New York Public Research Group was asked to comment on the state of the capital following the governor's speech and the Democratic takeover of the Senate, he replied with one word: "Chaos."