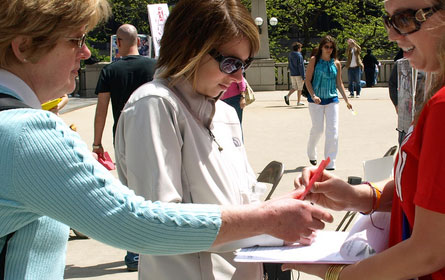 Just how hard is it to get on New York's ballot? Go here to Play Bump the Birds, Gotham Gazette's new ballot access game and find out. Are you smart enough to get on the ballot - and tough enough to stay there?

If you have attended a street fair, shopped at a green market or even walked along a city street, you have undoubtedly seen them smiling, holding clipboards, asking for a moment of your time to please sign their petition. All three citywide offices, including mayor, the five borough presidencies and all 51 City Council seats are officially up for grabs this year, and candidates have been busy collecting signatures for petitions needed to get on the ballot.

Only 10 months ago, New Yorkers expected a far more frenzied political landscape, since all the citywide officials, four of the borough presidents and 32 City Council members were about to be forced from their office by term limits. Then, in October, the City Council and the mayor decided to give themselves more time in office, extending the number of consecutive terms they could serve from two to three. Many candidates were waiting, hoping to run for the open seats of council members who would have been term limited, but now only eight council districts will see completely open races with the incumbent not running for re-election. Most incumbent council members will be running to represent their districts for one more term, as will all the borough presidents -- shrinking the pool of choices for voters. Although most of the current office holders face challengers, the incumbents will go into those contests with a clear advantage.

Another factor has historically narrowed the pool of competition even further: New York's cumbersome ballot requirements. New York is one of a handful of states that still requires all candidates -- incumbents and challengers -- to file petitions with voter signatures to secure a place on the ballot. Those petitions have to comply with a complicated list of requirements for the signatures to be considered valid.

This has turned the whole petition process into a political blood sport. Candidates with experienced election lawyers can bump many of their rivals off the ballot by challenging the validity of their opponents' petition signatures, disqualifying the signatures from the candidates' total signature count. These errors can include unclear handwriting, or the absence of a zip code or borough.

The lengthy and complicated rules have created a system that hinders healthy competition, according to candidates, voters, good government groups and even some election lawyers, who make their living by knowing these intricate ballot access laws. They use them to help candidates stay on the ballot and even kick off the competition.

New York's notoriously cumbersome election laws were created in the late 1800s to democratize the election process. Up until then, party leaders controlled which candidates were placed on the ballot. However, today's petitioning requirements ensure that only those candidates with huge campaign war chests or party backing have the wherewithal to get on the ballot -- and stay there.

The law is very specific about how many signatures candidates must collect. They have to get 5 percent of the enrolled voters of the political party in the political unit covered by the office -- council district, borough or the entire city -- or the specific numbers enumerated in the state's Election Law, whichever is less. For a candidate for City Council, that number is 900 signatures, but as a cushion against petition challenges, the rule of thumb is to obtain at least three times the legal minimum.

The candidates also must figure out is who is eligible to sign the petitions and who can collect the signatures. While only registered voters who are members of the candidate's political party and reside in the district in question can sign the petition, any registered voter who is a member of the candidate's political party and lives in New York City can collect signatures. Voters are allowed to sign just one petition per office.

The candidate has approximately five weeks to collect all of the requisite signatures and file his or her designating petitions with the main city Board of Elections office between July 13 and 16, which complies with the state law requirement that designating petitions be filed between the tenth Monday and the ninth Thursday preceding the primary election.

That done, the challenge portion of the petitioning process begins. According to the board's rules, it conducts a prima facie "review [of] each cover sheet and petition to ensure compliance with the New York State Election Law." This marks the first round of challenges to the candidate's petition -- but definitely not the last. The law allows any voter registered who can vote for the candidate to file written objections with the Board of Elections challenging that candidate's designating petitions. Those challenges must be made within three days of the filing of the petitions.

Once challenges are filed, the board holds hearings to assess the validity of the challenges and issues a determination. In order to appeal the board's decision a person must commence an action in state Supreme Court, the lowest level court in New York's court system, "within 14 days after the last day to file a petition or within three business days after the board makes a determination regarding the invalidity of such petitions, whichever is later."

If the appeal involves a determination about whether a candidate's name will appear on the ballot or a voting machine, the Supreme Court, if possible, is supposed to issue a final order at least five weeks before the day of the election. Candidates can appeal such decisions.

The Feb. 24 nonpartisan special elections for City Council held earlier this year offer a classic example of how the state's ballot access laws can cause major headaches for voters and election officials. Running for the Staten Island seat vacated by now U.S. Rep. Michael McMahon, candidate John Tabacco was a target of aggressive challenges by the current council member, then opponent, Kenneth Mitchell.

Tabacco faced two separate challenges. Like all candidates running in nonpartisan elections, Tabacco had to select a symbol for his "party." He made the mistake of selecting a five-pointed star, the official ballot sign of the New York State Democratic Party, which contributed to his unstable ballot status.

The other challenge involved the board assessing the validity of his signatures. The board re-examined some of Tabacco's petition signatures and decided that many of the signatures he collected were invalid; therefore his total collection failed to meet the number needed to appear on the ballot. After much legal wrangling, the day before the election, the Appellate Division restored his name to the ballot.

In preparation for the election, the board had already sent the voting machines to the poll sites, without Tabacco's name listed. With the legal decision coming less than 24 hours before the polls were set to open, the board had to swiftly shift to conducting the election on paper.

These last minute changes can be costly to candidates and taxpayers alike. In Tabacco's case, he said the petition challenges claimed 75 percent of his time during the special election in February, leaving him little to no opportunity to fundraise and campaign. He eventually lost to Mitchell, coming in fourth.

Of the total $179,983 he spent on the campaign, Tabacco said, approximately 28 percent went for election lawyers, political consultants and campaign volunteers related to meeting the petition requirement and defending the signatures in the legal process. "It's a completely outrageous, disgusting process," Tabacco said

The lengthy back and forth that can sometimes happen with ballot disputes, does not just cost the candidates. In District 49, the expense of all the paper ballots with the last-minute changes was eventually passed on to taxpayers. After including the cost of transporting the unused machines to and from the poll sites, staff to coordinate the move, and the printing of paper ballots for all the voters, the Board of Elections spent $132,564 on this election. Over $50,000 of that went for paper ballots.

Another candidate who ran in a Feb. 24 special election, George Dixon, a long-time resident of East Elmhurst and a former member of Community Board 3, has a slightly different take than Tabacco about the petitioning process -- probably because he had an election lawyer and didn't spend as much time in court as Tabacco.

"The upside is that you get someone out there and recognized in the community. The downside is that there are various reasons why a signature may not be considered valid," he said, noting that signatures can be removed if a piece of required information is missing, like the date or the county of the voter. "When you challenge a community of signatures, you're not challenging the candidate, you're challenging the voter," Dixon said.

Jerry Goldfeder, an election lawyer at Stroock, Stroock and Lavan LLP who worked on Julissa Ferreras' campaign against Dixon and other candidates in the Queens special election, said that there are better systems than petitioning for getting a candidate on the ballot. "I've been a long-time advocate of abolishing the requirement that one needs petitions to get on the ballot," Goldfeder says. "There are other ways to show community support to become a candidate, such as the number of donations, or perhaps a filing fee."

Election lawyer Henry Berger, agreed. "The petitions' challenges in New York are one of the tactics used to discourage people from running for office," he said.

Some claim the city's nonpartisan special elections present even more burdensome signature requirements than regular elections because candidates have to rush to get the required number of signatures in a much shorter time period. If challenged, the time period to appeal and stay on the ballot is much shorter as well.

Proponents for changing the ballot access laws argue that, under the current system, candidates are required to collect too many signatures with too little time, a task that can be difficult if you do not have the support and resources of a political party behind you. They say that, in effect, these laws diminish voter choice by only leaving one or two names on a ballot and excluding community members who might be credible candidates, but are unable to raise the funds necessary to withstand aggressive ballot-bumping. Candidates whose signatures are challenged, have to spend time in hearings with the Board of Elections and in the courts, taking precious time away from increasing their name recognition and campaigning. Perhaps more importantly, it drains financial resources.

One recommendation for reforming the state's labyrinth ballot access laws calls for reducing the number of signature candidates needed to appear on the ballot. Good government advocates also argue that other broad changes to elections can create a more level playing field for new candidates. Proposals include nonpartisan elections, ranked voting, independent redistricting and public campaign financing. Getting the access laws changed, though, poses a real challenge. Whatever they may cost voters and the public, these laws also benefit incumbents who want to remain in office and stymie competitive elections. Given that, it's no wonder that these laws have not been reformed.

DeNora Getachew is the director of public policy and legislative counsel and Andrea Senteno is the program associate for Citizens Union Foundation, which publishes Gotham Gazette. Additional reporting for this article was provided by Alex Kane, an intern for Gotham Gazette.