September 14, 2009 | by DeNora Getachew and Andrea Senteno
Twitter
IT news 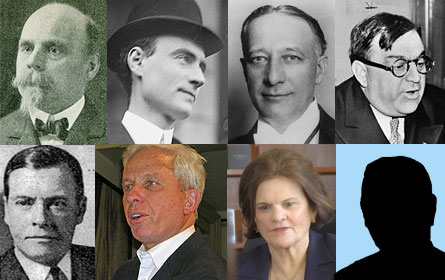 When Did New York City Even Get a Public Advocate?

The position of public advocate originated in 1831 way back when the city was still five separate boroughs, according to a 1998 New York Law School Law Review article co-written by Laurel Eisner and former Public Advocate Mark Green, who is seeking the office again. It was not called the public advocate then, but even as president of the Board of Alderman -- a legislative body representing the borough of New York and portions of the Bronx -- the position was next in line to the mayor. This job was converted into that of City Council president in 1936 -- still a heartbeat away from the mayor in the event of vacancy, disability or other absence from office and empowered to preside over the Council.

The council president had a very limited role in government. During the 1975 charter revision debate, according to Green's article, it was noted that, although the office had no real administrative authority over the delivery of city services, was not a member of the executive branch and had a very narrow role in the council, it served an important function as a "critic at large." After debating whether to eliminate the office -- the first of many conversations about its role and utility of the office -- the 1975 commission instead decided to empower the council president through "a new, quasi-ombudsman role." The term ombudsperson derives from the Swedish word for "go between" or someone who would "protect individuals against the excesses of bureaucracy."

Despite these new ombudsperson powers, the council presidency still was pretty limited in its capacity -- lacking the ability to pursue individual complaints and the enforcement tools to ensure it could actually, not just theoretically, oversee or review city agencies. With this as a backdrop, the 1989 charter revision commission again revisited the issue of the role of the council president. Some commission members proposed eliminating the office, some said keep it, and some presented a new option that is still being debated until this day -- creating an appointed ombudsperson position.

Yet again the council president's role was saved from the hatchet -- this time because Commission Chairman Fredrick A.O. Schwarz argued that the role brought balance to city government by "concentrating on the service implications of the programs" implemented by the mayor.

The 1989 charter commission gave the office new responsibilities that created a bit of a several-headed monster -- one part legislator as presiding officer of the council, one part executive as first in line to succeed to the mayoralty, one part "charter cop" through the ombudsperson role and one part pension trustee for the city's Employees' Retirement System. It also gave the office power to appoint a member of the City Planning Commission, among other appointment responsibilities.

Today, the public advocate's legislative role allows him or her to be an ex officio member of all council committees and to introduce legislation, but not to vote. The ombudsperson role, which was substantially bolstered in 1989, empowers the public advocate to address individual grievances, deal with citywide problems, evaluate the performance of city agencies and "monitor public information service complaints of city agencies."

Despite the substantial increase in the council president's authority, only four years later in 1993, legislation was proposed in the city council to abolish the office of council president. This idea was again rejected in favor of simply changing the name of the office to public advocate to "reflect its charter roles and to dispel the impression that the holder exercised a predominant role in the City Council."

Fast forward to 2009, a municipal election year, and the discussion continues about keeping New York's public advocate. While the candidates vying to be the next public advocate give campaign speeches about what they would do to bolster the office's visibility and authority, at the other end of the spectrum Councilmember Simcha Felder from Brooklyn introduced a bill and issued a report in July 2009 -- proposing to get rid of the office altogether. "It is clear to me that given the services provided by the city's 59 community boards, five borough presidents, and numerous city, state, and federal elected officials, the office of the public advocate could easily be eliminated without a loss of service to city residents," Felder said. Felder's bill is currently pending in the Council's Governmental Operations Committee awaiting a hearing.

Other Places Have Ombudspersons Too

While electing a city ombudsperson may be unique to New York City, the tradition of a public official to empower ordinary citizens, especially those who have been marginalized, originated in the United States in Jamestown, New York. Many other cities and states have this function within their government structure. Portland, Ore., describes its ombudsperson, who is appointed by the city auditor and therefore independent from the mayor and the city council, as being able to assist the public with their complaints and concerns and promote higher standards of services and efficiency.

In Detroit the city ombudsperson is appointed by the city council, but is meant to be an independent government official to respond to citizen complaints against city agencies and government departments. Detroit's ombudsperson holds subpoena power so can retrieve documents and records necessary to conduct investigations -- a power that New York City's public advocate lacks. The current office holder, Durene Brown, claims success for being the first city official to change state law in Detroit -- passing a measure to include libraries as drug-free zones.

Other cities have appointed ombudspersons who focus on addressing complaints in specific areas, like police and law enforcement or senior citizen services, as is the case in Boise and Minneapolis, respectively. Finally, Los Angeles has an ombudsperson office that boasts ombudspersons to seven different city agencies, ranging from the Sheriff's Department to the Department of Social Services.

A Public Advocate's Perspective on the Matter

New York's current public advocate, Betsy Gotbaum, who has been in the office since 2001, said that although people are unfamiliar with the office and it has few resources -- it has a budget that is only "one two hundredth of 1 percent of the total city budget" -- she believes it helps thousands of everyday New Yorkers with their problems. In particular, she said, her office has focused on "improving services for often ignored populations."

Gotbaum disagreed that the services her office provides duplicates other services, citing the many calls the office receives as referrals from the city's 311 non-emergency hotline. She would like to se the 311 include a "direct link" to her office.

Moreover, her office has been able to help many citywide constituents by using a sophisticated computer-based tracking system that allows her and her staff to troubleshoot individual problems while tracking trends that may indicate citywide issues.

In addition, Gotbaum's policy staff, alone or in partnership with relevant advocacy groups, conducts research and issues reports spotlighting problems. These may or may not be accompanied by a press conference depending on whether the issue is something that her office believes the local media will cover. Because of "institutional limitations" and a difficult-to-engage press, Gotbaum said it has been difficult to get attention for the issues she believes are important. Like Gotbaum and the council presidents/public advocates before her, the next public advocate will have to learn to navigate these obstacles in order to be successful.

On Tuesday, many New York City voters may go to their poll sites and wonder who they should select as Public Advocate, why does it matter and whether they believe this office serves an important function. These are all important issues to consider on Primary Day and when the next charter revision commission or local legislation raises these questions again.