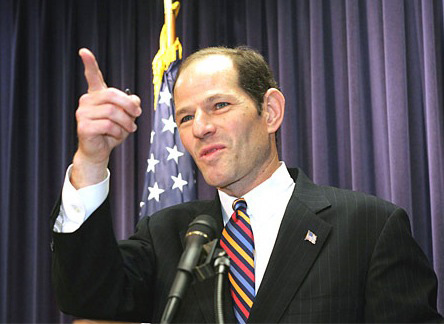 With Eliot Spitzer sworn in as governor on the first day of 2007, New Yorkers have an array of expectations and demands for the state's new chief executive. Some want to see their taxes go down, while others want better services in the state. And still others think that, with a state senator under indictment, the state comptroller forced to resign and the Senate majority leader under investigation, nothing is more important than cleaning up the mess in Albany.

For his part, Spitzer has vowed changes from Day One. But how can he negotiate his way through the competing demands and the labyrinth of state government?

Last month the New School's Milano School sponsored a conference on "Governing Change: Policy, Politics and the Spitzer Administration." The following comments from five people in the know, including two former governors, are excerpted from the discussion.

There are basic and substantial policy problems facing New York State. If I were an adviser to the governor, I would say, solve some of the issues that the people in the state care about. 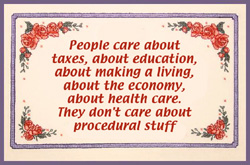 Spitzer has a ruling from the State Court of Appeals that gives him a lot of freedom on the budget. The legislature can barely do anything about it except sit on its hands. He has an enormous victory from the electorate. He has a huge majority of Democrats in the Assembly and a bare majority of Republicans in the Senate. And I believe the Republicans are looking to work with him. So if Spitzer does not succeed in advancing some of these issues, he has really blown it and the electorate has a right to take it out on him the next time he runs.

Political money is like water in the basement. You can do every single one of these reforms: You can limit the amount of money you ask for, you can prevent lobbyists from holding fund-raisers in Albany, and all of that, but resources are going to flow in the next election because that's the way it is.

If the governor is going to expend his resources, he should expend them on something where he can go back and say to the whole state, "There, I did something for you, and your life will be better because of it." Campaign finance reform is not it.

Norman Adler is a political consultant.

This is the 15 minutes of fame for reform in New York. Reform has been put on the agenda. And we have a change in the executive branch. We have a governor-elect who has committed himself, both through his behavior and through his policies, to fundamental reform of our government.

So we're at a special moment. The fundamental question is, what should we pay attention to and focus upon? Since everything has the word "reform" added to it, the population of possibilities, already very large, expands.

First: New Yorkers need a functioning democracy, and they do not have one. There were more votes cast - 20 percent more - for governor in 1954 than in 2006. The drop off is palpable from the last relatively competitive election to this one, so there is something going on. One thing we can do is restore confidence in the system. We need campaign finance reform, legislative redistricting reform, and election administration reform. Our failure to meet federal expectations on the Help America Vote Act has raised visibility of the fact that we have a grievously abysmal election administration system embedded in our state constitution.

Second: Return financial balance and probity to state government and to local government. We hear discussions on how to make borrowing easier in a state that has an extraordinary level of debt. Bring fiscal balance to the state, real balance, not year-to-year balance. Address the property tax. Make the budget outcome transparent and understandable to citizens 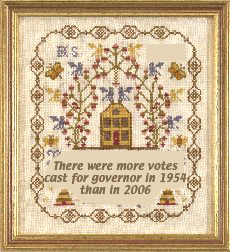 Third: Improve our institutions and the relationship among our institutions. We have to attend more to the reform of the judiciary, which has been stymied despite the best efforts of the chief judge because it requires constitutional change. There are other opportunities for greater transparency, greater accountability

And I think we have a fundamental stake in the revitalization of the Republican Party. If we do not have competitive politics, we cannot have accountable government. If we have the principal Republican institution in the state [the State Senate] dependent upon malapportionment, and our failure to reform campaign finance, Republicans will persist in relying upon systemic pathologies to sustain the only bit of power that they still retain.

The governor has some choices to make. If I were making the choices, some of the most popular reforms would not move forward because they are the least likely to be achieved. I would take reforms like merit selection of judges out front. I would take reforms like getting a decent technology to reform voting out front. If the courts are making us do those things, the governor should embrace the opportunity.

But in the longer term, our governor-elect needs a constitutional reform agenda. Every area I have mentioned implicates the New York State constitution and barriers to change in it.

Gerald Benjamin is dean of liberal arts and sciences at the State University of New York at New Paltz and an expert on state and local government.

The list is long, and there are only so many things one governor can do. So if I were counseling the governor, I would urge him to focus on using his executive power and on the areas where opportunities will present themselves this year.

For example, the law that creates the legislative redistricting commission expires in June. That law has to be extended if the legislature wants to continue to have a commission that, as far as I can tell, does nothing for eight years and a lot for two. This is a perfect opportunity to raise the issue of how district lines are drawn. Can the governor win on that issue in one year? Not if you want a constitutional amendment. But you won't get a constitutional amendment unless you begin the process. 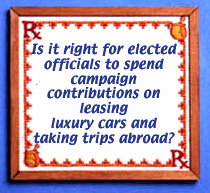 The lobbying law expires next year. It is a perfect opportunity to raise the issue of lobbying and ethics. Next year is the 20th anniversary of the state's ethics law, which was not great when it was first passed and has withered away. The longer you have a reform, the more people think of how to get around it. New York's ethics law has more or less been frozen in time and space from 1987, and people have figured out how to game the system. So it's a good opportunity to go to that issue.

Is it right that the party campaign contribution limit is about to go over $100,000? Is it right for elected officials, who virtually never face opponents, to spend the money on themselves, for leasing luxury cars, for taking trips abroad? Is it right that no one enforces the pathetic law we have in New York?

People are not writing huge campaign contributions because they are giving to charity. They want something in return. And when they talk they speak with a megaphone and the rest of us speak with a whisper. That's not right.

Spitzer does have to deliver on the big-ticket items. But he has to have a reform victory that people understand relatively quickly because it will get harder as time goes on. He should press ahead on some of these issues and see what shakes out.

If Spitzer is able to achieve reasonable campaign contribution limits, as low as possible, close up some of the ridiculous loopholes in the law and actually get it to be enforced, that would be a substantial achievement. 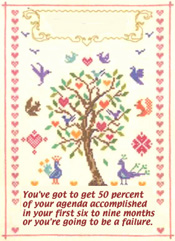 But we found $2 billion out of a $14 billion budget in the first two months. I believe that there's no modern budget that doesn't have 10 percent in it that couldn't be cut. Government has a way of growing beyond what's absolutely necessary, so I would suggest to Governor-elect Spitzer that he solidify that no new taxes pledge, which he has come close to making, and stick by it. It creates the discipline you need.

There are creative things you can do. We are at a point, for example, where we can consider changing from a tax based system for transportation to a user based system that would take some pressure off the tax rolls and transfer it to the consumers of various services.

You've got to get 50 percent of your agenda accomplished in your first six to nine months or you're going to be a failure. The first year is critical. And you need at least one confrontation with the status quo to indicate that you're your own person. But beyond that, there's something to be said for getting along with the leadership of the legislature of both parties.

I think Spitzer is in a good position. This is a guy who clearly doesn't mind breaking a few eggs to make omelets.

A lot will depend upon events. For example, the Jersey shore is almost sacred in our state. And in the late '80s the Jersey shore was closed as much as it was it was open because of medical waste washed up on shores, sewage sludge and so on. A part of my campaign was that I was an environmental guy and that we were going to do something about the shore. And we actually did it. We got $1.5 billion for sewage facilities, we got laws on sewage sludge. And for the last 12 years, the Jersey shore has been virtually pristine.

Those kinds of things allow you to lead. The problem reaches crisis proportions and someone addresses them, then your locomotive has a caboose.

On the ostensibly tough issues you can start laying out what's involved and sometimes you can change public opinion. On gay marriage, if Spitzer is on the record as being in favor if it, he's going to have to sway the legislature, When I was governor, one of the things that I did was ban assault weapons. I took on the National Rifle Association. People said you can't do that. But we went out and educated the people on why it wasn't desirable to have access to Uzis and AK47s in our communities.

You have got to be comfortable with yourself. If there are things you have to do to get elected that are going to cause you sleepless nights, it's not worth the cost. So, I would suggest to the governor that he works from his own sense of values. I'm not saying he has to be suicidal but risk adversity seems to be the be all and the end all in politics in this day and age and that's really not what elections are supposed to be about. Making people unhappy is not the worst thing in the world.

Jim Florio is the former governor of New Jersey.