Franz Kafka, the sometimes inscrutable Czech writer who chronicled man’s search for worth and meaning, and Mickey Spillane, the tough detective writer whose novels featured sultry blondes and bleeding bodies (often the sultry blonde is the bleeding body) have little in common. Amid their many differences, however, both men found inspiration in New York and wrote books that the academics, writers and others we asked cited as among their favorite works about the city.

This week’s recommendations come from experts about the city and from artists who work in the city. Most of those who responded also told us what made their selection especially noteworthy. (Their comments are included.)

Interestingly many of the experts, including many who have written nonfiction works about New York, pointed to works of fiction or photography as their favorites. So, if you are heading out of town, whether to Jones Beach or the Kalahari, and want to bring a piece of New York with you, there’s almost certainly something here to satisfy your taste. If not, look at our choices from last week when people who work with books â€“ as booksellers, librarians and writers â€“ recommended their favorite volumes about the city.

Amerika by Franz Kafka
One of my favorite books about New York is actually by someone who never visited it. The New York that Kafka creates is a place of wondrously tall buildings, elevators, speedy vehicles, businessmen sitting behind enormously large desks, slightly creepy characters, and mysterious, opaque events. It is an almost childlike vision of New York at the dawn of its emergence as the capital of the 20th century. Kafka's city is a purely imaginary construct, and precisely for that reason it captures something quite basic about New York, which is for so many people an imaginary construct before they ever visit it and even after they have come to know it quite well. 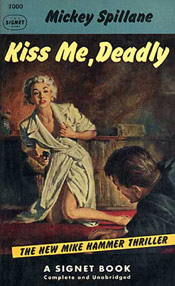 I found V. on my father's bookshelf when I was a teenager. Before that, Manhattan to me was counting limousines and eating Italian ices from hollowed-out orange rinds. The characters in the Manhattan sections of V. are unstable, lacking strong connections to other people or any moral grounding. The depiction of money and job woes is bitingly true -- at least until one character lands a gig hunting alligators in the sewer.

A Hazard of New Fortunes by William Dean Howells
This is a classic work of American literature from 1890. It begins with an extended search for a New York apartment, when Basil March moves from Boston to work in publishing. Of course, he ends up paying twice what he planned for half the features! This novel also shows the politics around early public transportation, which make our transit strikes look very tame by comparison.

Kiss Me, Deadly by Mickey Spillane
In 1952, this became the first private-eye novel to make the New York Times best-seller list. Detective Mike Hammer wants to find out who totaled his car and nearly killed him. The men he encounters as he follows leads from borough to borough are quite unsavory, the women very savory, but all murderous. (Maybe if he had just taken the train. . . .) The 1955 adaptation of this book, though set in Los Angeles, is one of my favorite movies.

Invisible Man by Ralph Ellison
Anyone interested in New York City squatting, subway tunnel dwelling, and/or other traditions of establishment exploitation should take a close read into Ralph Ellison's Invisible Man. The book is a landmark not only for its bedrock truth regarding race relations in the "cosmopolitan" New York of the 1950s, but also because of the language with which Ellison allows the protagonist to describe his predicament, slyly, without one mention of Mr. Invisible's identity. Haven't we all wished at some point to be transparent? Read Ralph's narrative as a testimony from someone who was. 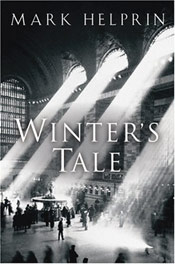 The Crying of Lot 49 by Thomas Pynchon
My favorite because he captures the humor and the surreal quality of New York as well as the interconnectedness of all of the people that live here.

The Alienist by Caleb Carr

Winter’s Tale by Mark Helprin
(One of our readers, Matthew Sholler, also endorses Winter’s Tale: “If you're any kind of a fan of the magical realism genre that many late 20th-century Latin American novels and shorter stories are known for, then this will be a treat. Set in New York City in the early 1900's, it's the only book I've read that uses this approach to storytelling in a North American context. Helprin creates a wonderfully compelling protagonist in Peter Lake, a wily, good-hearted thief who goes on an incredible journey following a chance encounter with the daughter of a wealthy newspaper publisher. In addition to its distinctive characters, Winter's Tale contains some of the most vivid and inspiring descriptions of New York City, giving it a life of its own, a life that anyone who appreciates New York will recognize and celebrate.”)

THE ART OF NEW YORK

Broken Land, an anthology of Brooklyn poems edited by Julia Spicher Kasdorf and Michael Tyrell
It’s just very lovely, â€¦ very evocative and gives the reader a very powerful sense of the many faces of Brooklyn, the different characters of Brooklyn, the tension and dynamism and the beauty of the borough. Some of it is about neighborhood; some about emotional issues; some about political issues; one about the Brooklyn botanic garden. There are stories that are very personal and private and others that are the grander scheme of urban life. It’s a great treat. It’s beautifully done.

The Season: A Candid Look at Broadway by William Goldman

The Zagat’s guide
The one I use most.

Off Off Broadway Explosion by David Crespy

Caffe Cino: The Birthplace of Off-Off-Broadway by Wendell C. Stone

Most of the reading about the city I’ve done in the recent past has been about the birth of the Off Off Broadway theater movement in the 1960s and there are three great books on my short list. Since, to me, Off Off Broadway is a vital part of the city's history -- not only theatrical, but generally -- these books are definitely books about New York, and good ones.

The Island at the Center of the World: The Epic Story of Dutch Manhattan and the Forgotten Colony That Shaped America 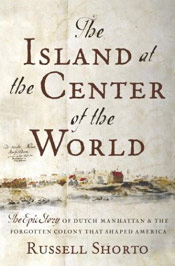 Shorto makes history read like a novel. Island at the Center of the World tells the story of New York before it was even New York and reveals a community that was more upwardly mobile than we might imagine and far more multi-ethnic than the grade-school lessons we all remember about the early settlements to New York’s north and south.”

Old New York In Early Photographs, 1853-1901: Prints from the Collection of the New-York Historical Society by Mary Black
Neighborhood by neighborhood, these extraordinary images freeze a city in constant flux: carters moving goods to sailing ships on South Street; pushcarts, peddlers and shoppers lining the sides of Mulberry Street; crowds on Fifth Avenue greeting Admiral Dewey; bicyclists going past Grant's Tomb; the dizzying S-curve of the Ninth Avenue elevated train at 110th street, running through virtual countryside. That we have photographic images of all this and more seems miraculous.”

(Freeman is also a great fan of fiction set in New York, including: Herman Melville's Bartleby, the Scrivener: A Story of Wall Street; In Dreams Begin Responsibilities by Delmore Schwartz; the Harlem detective novels of Chester Himes and Richard Price's Blood Brothers.”

Fred Siegel, author of The Prince of the City: Giuliani, New York and the Genius of American Life 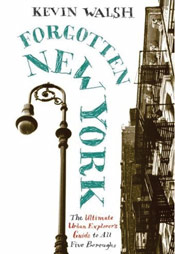 Forgotten New York by Kevin Walsh
The roadmap to a five-borough historical treasure hunt. Walsh has located, cataloged and deciphered all the oddities and anachronisms that dot the Gotham landscape. You'll scratch your head no more over that curious statue or that mysterious structure or that bizarre inscription.”

Out of Fire and Valor: The War Memorials of New York from the Revolution to 9/11 by Cal Snyder
It's shameful how we New Yorkers disregard the war memorials all around us. After reading Cal Snyder's book, you'll never pass another monument without pondering its heartfelt significance.”

A Living Lens: Photographs of Jewish Life from the Pages of the Forward by Alana Newhouse
It’s a wonderful project of photographs never seen before. [The museum has featured an exhibition of some of the photographs.]

(Treat also recommended for children, Sidney Taylor’s All-of-a-Kind Family, a “wonderful series about growing up on the Lower East Side.” And she wonders, “Does anyone read Harry Golden any more?”

â€¦THE PRESENT AND THE FUTURE

Michael Wallace, co-author of Gotham: A History of New York City to 1898 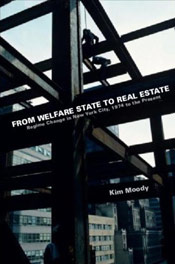 sharper. While thousands of black and Hispanic youths, spurred by a poverty rate twice the country's, line up for a handful of jobs at a Times Square store, the superrich are busy snapping up $20 million condos. Kim Moody's compelling narrative of Gotham's post fiscal crisis history offers an explanation of what produced this jagged social topography. Economic elites and powerful mayors, operating in a municipal environment transformed by globalization and 9/11, were able, he argues, to impose a neo-liberal agenda on the city. And subsidizing real estate and corporate development, while rolling back social programs, in turn exacerbated the income gap. Moody's assessment â€“ comprehensive, cogent and rooted in solid research â€“ is essential reading for those seeking to understand the contemporary relationship between "progress" and poverty.

The Suburbanization of New York: Is the World’s Greatest City Becoming Just Another Town? edited by Jerilou Hammett and Kingsley Hammett
What's next for New York? Will it retain its edgy preeminence as global crucible, the place par excellence where the world's peoples come to clash and fuse and create the future? Or will the forces of suburbanization â€“ now sprawling and malling their way into town â€“ tame the raucous metropolis, subdue its contrarian politics, make of it just another outlet for Disneyfied culture, big-box commerce and franchise food? Perhaps something altogether new is busy being born at the contested urban-suburban frontier? Only two things are sure: New York is in rapid motion, and this book is a great guide to where it might be headed. Its diverse array of speculations -- written by some of the country's smartest (and wittiest) analysts and activists -- are incisive and accessible, provocative and entertaining, perfect for an urban studies course and for anyone interesting in pondering the past and future of cities. 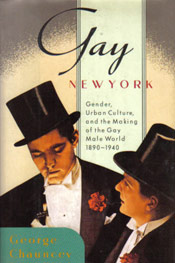 Gay New York by George Chauncey
Because it's so thoroughly researched, it's full of scope and detail - two things you rarely find in the same place.

Stonewall: The Riots that Sparked the Gay Revolution by David Carter
It also is impeccably researched and detailed. It's so immediate and relevant because it focuses on a time closer to our own and some of the key players are still around. A boundless source of insight.

(Finley also likes several novels: Old New York by Edith Wharton, because “The author does such a fantastic job in evoking the period you feel like are there, not just want to be there”: and Time and Again by Jack Finney and The Alienist by Caleb Carr. Both of which he says are not classics of the Edith Wharton mold, but terrific stories told by great storytellers.)