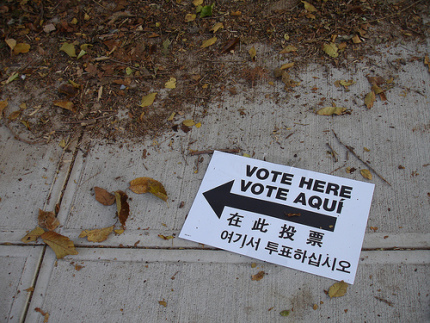 Primary season has begun, and on “Super Tuesday,” February 5, New Yorkers will join voters in the 22 other states holding a primary or caucus that day to cast ballots for their favorite presidential hopeful. Many voters only recently began to think about which candidate they would support. Yet New Yorkers who are registered in one party but prefer a candidate in another one will be out of luck. The deadline to change parties in time for the primary came and went last October, unnoticed by many voters who may have been planning to switch their affiliation.

New York has one of the longest lead times to change party affiliation in the country, along with New Hamshire. With a growing number of states implementing open primaries, does preventing voters from party switching protect the primary process or just leave New Yorkers with fewer options?

In New York State voters who wished to change their party enrollment for February's presidential primary had to make the switch official by Oct. 12, 2007. The deadline is designed to prevent "raiding" - when voters of one party choose to vote in the other party's primary so they can help select a weak candidate who their true party's candidate could easily defeat in the general election.

Some observers question how widespread such raiding would be. Michigan's Republican primary allows voters, regardless of party affiliation, to request a ballot for any party - but just one -- on primary day. Prior to this year's presidential primary there on January 15, some people predicted that Democrats might cross over to the GOP, hurting presidential candidate Mitt Romney's chances of winning in the state. Ultimately few independents and Democrats voted in the Republican primary and Romney won the primary election with 39 percent of the vote.

What New York's long deadline does do, though, is serve as a barrier for many voters who want to help select the nation's presidential candidates.

New York State election law says voters must change their party enrollment 30 days prior to the general election preceding the primary they wish to vote in. In other words, to change the party primary you could vote in this February, you had to change your voter enrollment a month before last year's general election, a little noticed contest since few major offices were at stake.

If you failed to change your party affiliation last October, not only can you not vote in the party of your choice next month, but you also cannot switch for September's state primaries. To select a new party affiliation for that round, you would have had to declare your intentions 11 months before the election.

In New York, new voters can register up until 25 days before an election. That meant people who would be voting for the first time in New York on February 5 had until January 11 to register to vote and to join a party. Registered voters not formerly affiliated with a party are subject to the state's change of enrollment deadline.

New Hampshire has rules similar to New York's. Registered voters with a party had to change their affiliation last October to vote in the party primary of their choice earlier this month. But in the Granite State, unlike New York, voters with no party affiliation can select the primary they wish to vote in on the day of the election, and new voters have until Election Day to register. In Kentucky voters have to change their enrollment by December 31 of the year preceding the primary they wish to vote in. Most other states allow people to change their party affiliation up until the deadline for new registrants, which is usually 30 days in advance of the primary election. In some states with open primaries, voters can declare which primary that would like to vote in anywhere from a month before to, in the case of Wisconsin, the day of the election.

For more on the presidential primary, including where the candidates stand on issues of particular importance to New York City voters, check out Gotham Gazette on Feb. 4. And look for ongoing coverage of the campaign in New York in the Wonkster.

The Question of Constitutionality

In the 1970s a group of New Yorkers prohibited from voting in party primaries because they missed the date for switching parties challenged the New York deadline, which was then the same as it is now. They argued that the timeframe was unconstitutional because it restricted their inherent rights under the 5th and 14th Amendments to affiliate with the party of their choosing.

Two lower courts ruled in Rosario v. Rockefeller that the New York's enrollment deadline was unconstitutional. But in 1973, the Supreme Court, in a five-to-four split, overturned the decision and upheld New York's primary procedures. The state's policies did not absolutely disenfranchise voters, said the Supreme Court, they merely put in place a time restriction in relation to party affiliation.

New Yorkers are becoming more aware of the power and appeal of third party and independent candidates. Our own mayor, Michael Bloomberg, switched his party affiliation from Republican to independent before the deadline (meaning he will not be able to vote next month), and City Council special elections, held to fill mid-term vacancies, are already nonpartisan. In 2003, Bloomberg advocated a ballot proposal that called for nonpartisan primaries open to all registered voters, regardless of affiliation, to select candidates for municipal office. The top two vote getters in the primary would vie in the general election. Voters rejected the idea by more than a two-to-one margin.

Other states have taken different approaches. Nineteen states, including Georgia, Hawaii, Idaho, Vermont, Texas and Washington, have open primaries. The voters can choose on Election Day which primary they will vote in, by public declaration or secretly in the voting booth, depending on state regulations. While voters in these states can participate in any primary they like, they can only vote once. In other states, independent or nonaffiliated voters may be allowed to vote in a party's primary either by notifying the state and party prior to the election, or sometimes in secret on Election Day. Voters with a party registration though have to stick with that party.

While a growing number of open primaries will hardly end the closed primary system, future efforts, especially by independents who feel excluded from the primary process, may force primary rules to change. Until that happens here, choose your party wisely, because you may be stuck in it for a long time to come.