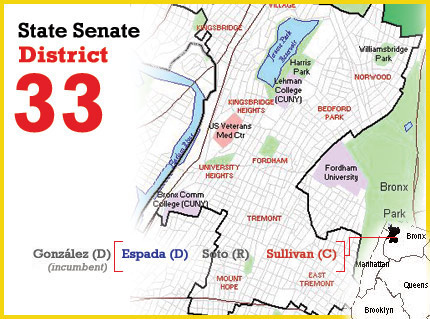 For Gotham Gazette' coverage of the primary in the 33rd Senate District, including additional information on incumbent Ephrain Gonzalez, go here.

He may also have benefited from a schism in the Bronx Democratic Party. The organization, headed by Assemblymember Jose Rivera, backed Gonzalez, who was just one of a number of the organization's candidates who lost Democratic primaries on Sept. 9.

On Election Day, Espada's sole opponent is the Conservative Party's William Sullivan, who has seemingly kept a very low profile .Republican Richard Soto, another almost invisible candidate, is no longer on the ballot.

Espada's return to the State Senate -- he previously represented another Bronx district in that body -- makes some Democrats nervous. Although he is running as a Democrat and previously held office as a Democrat, Espada has flirted with the Republican Party. This worries Democrats, who hope to capture the Senate this year. If the elections leave the parties deadlocked, they fear Espada will once again turn to the GOP, letting the Republicans maintain their control.

"There's something ridiculous about a Legislature in which a pol as slippery as Pedro Espada Jr. could be the ultimate power broker," Bill Hammond wrote in the Daily News, reminding readers of Espada's past legal and political shenanigans. But, Hammond continued, "His whim might well determine which party controls the State Senate - and the future direction of state government."