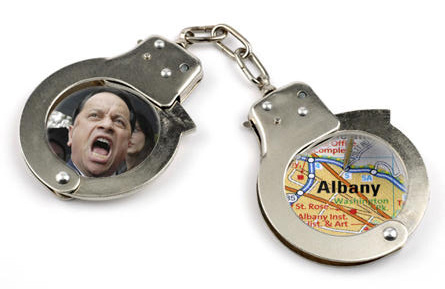 Espada's alleged corruption has been Albany lore for years, and he now joins a list of state politicians charged with abusing their office. The attorney general's office is currently investigating Gov. David Paterson. Meanwhile, former Senate Majority Leader Joseph Bruno waits for sentencing following his conviction on federal corruption charges. To top it off, former Assemblymember Anthony Seminario was recently sentenced to six years on federal corruption charges, and a number of legislators are under federal investigation for their relationships with nonprofits.

New Yorkers will almost assuredly elect a new attorney general this year, and already at least five Democrats have lined up to seek the job. So the question of how he or she would confront official corruption has acquired new urgency.

Assemblyman Richard Brodsky: Brodsky has served in the Assembly since 1982. He represents parts of Washington and Westchester counties. Brodsky is known for taking on state authoritie, and his stern opposition to congestion pricing. Brodsky ran for attorney general in 2006 but dropped out, citing concerns about his daughter's health.

Sean Coffey: Coffey is a former Navy captain and federal prosecutor. He is best known for leading the lawsuit against WorldCom for the New York State Retirement Fund. Coffey recovered $6 billion from Wall Street banks in that case. Coffey lives in Westchester County.

Eric Dinallo: Dinallo worked for the attorney general's office under Eliot Spitzer and is credited with dusting off the Martin Act to go after corruption on Wall Street. Dinallo worked as superintendent of insurance for New York State from April 2007 to May 2009. He lives in Manhattan.

Elizabeth Holtzman: Holtzman served in Congress from 1973 to 1981. She also served two terms as Brooklyn district attorney and was the city's first female comptroller.

Kathleen Rice: Rice is currently the district attorney for Nassau County. She has earned a national reputation for her tough prosecution of drunk drivers. Rice also has won praise for her unique community-based approach to fighting the drug trade.

Eric Schneiderman : Schneiderman, a public interest lawyer, was elected to the State Senate in 1998. He has proposed significant ethics reforms and led the charge to repeal the Rockefeller Drug Laws. He also chaired the committee that recommended the ouster of Sen. Hiram Monserrate.

Daniel Donovan: A Republican who is considering entering the race, Donovan was elected Richmond County district attorney in 2003. Before that he spent eight years under Manhattan District Attorney Robert Morgenthau.

John Flanagan : Flanagan, among the few Republicans said to be considering entering the race for attorney general, represents parts of Suffolk County in the State Senate. He was elected in 2002 after serving in the State Assembly for 16 years.

Denise O'Donnell : O'Donnell, a Buffalo area attorney and Democrat, served as commissioner of criminal justice services and assistant secretary to the governor for criminal justice in the cabinets of Gov. David Paterson and former Gov. Eliot Spitzer.

The attorney general has enormous authority. He or she serves as the legal counsel for the state and for state employees facing lawsuits. The office protects the public good and can investigate and file lawsuits in the areas of consumer fraud, civil rights, real estate, environmental protection and internet transactions. It also collects money owed to the state.

As elected officials â€“- and politicians -- attorney generals almost inevitably will make political calculations about cases. This can cut both ways. Espada has charged Cuomo’s prosecution of him is politically motivated. Critics of former Attorney General Eliot Spitzer say he did not pursue Albany’s misdeeds as fervently as those of Wall Street because he wanted support of elected officials when he ran for governor.

During a 2004 interview with Gotham Gazette, former attorney general and current City Councilmember Oliver Koppell asked, "How can the lawyer for state officials investigate wrongdoing by those officials?"

Others, including those vying for the office, say they can.

"I don't think it matters who is prosecuting the charges as long as they are brought," said Assemblyman Richard Brodsky, a candidate for attorney general this year. Brodsky added that he thinks a number of the larger corruption cases were prosecuted by the federal authorities simply because they fell under federal jurisdiction.

According to Eric Phillips, spokesman for Nassau County District Attorney Kathleen Rice, another Democratic candidate for attorney general, federal investigations have exposed more corruption in Albany than the attorney general simply because the state official does not have the power to do so. "Despite [the attorney generals'] unique insight and statewide grasp of the landscape and the laws, the legislature has limited their scope and put them in a rather narrow place between local district attorneys and U.S. attorneys,” Phillips said.

That is not to say Cuomo has kept his hands off Albany completely. He ran as the "Sheriff of State Street," promising to deliver Albany from itself. To start out, he created a system where his office screens member items. He created Project Sunlight -- a virtual digest of member items, legislation and campaign contributions -- and has repeatedly called for the power to issue subpoenas in corruption cases.

Only recently, though, with both the Paterson and Espada investigations, has Cuomo truly bared his teeth.

A number of politicians who hope to replace Cuomo have their own ideas of how the office should lead the charge against corruption in Albany. Some Democrats say they believe Cuomo has not been as aggressive as he could have been in hunting down corruption in Albany because he wanted to maintain his political alliances. Those vying to replace Cuomo (assuming, as everyone does, that he will run for governor) have been trying to explain their vision to voters as the race begins to heat up. The first major test will be Democratic Rural Conference straw poll in Niagara Falls on Saturday.

Power to the Attorney General

At the turn of this century, Spitzer rode into town vowing to clean up Wall Street. While Washington turned a blind eye to questionable conduct in the financial industry, Spitzer, with the help of the Martin Act (a piece of New York's General Business Law written in 1921 that allows the attorney general extraordinary powers in fighting financial fraud), was able to build his Sheriff-of-Wall Street reputation.

Coffey said he expects that the top priority following the November election will indeed be reform. Coffey said he will work side by side with Cuomo -- if he is elected governor -- to enact reform, but says the attorney general's office will need additional power no matter who is governor. The attorney general "needs the permission of the governor or department heads to initiate an investigation," he said. "I think that has cramped Andrew Cuomo. Let’s give the [attorney general] the tools he needs.”

Another candidate, the former superintendent of the New York State Insurance Department Eric Dinallo, who is also credited with dusting off the Martin Act for Spitzer, has a six-point plan for getting the job of reform done. Most of it relies on using existing law to better regulate Albany. His major proposal calls for the governor to sign an executive order giving the attorney general jurisdiction over corruption cases involving state departments, agencies and the legislature.

“Mr. Dinallo continues to support Attorney General Andrew Cuomo's call for legislation granting the attorney general primary jurisdiction over public corruption cases, but with the stroke of a pen the governor can, and should, immediately provide the attorney general greater authority," a statement from him says.

Sen. Eric Schneiderman, a Democratic attorney general candidate who has proposed numerous ethics reforms during his time in the Senate, said that he would expand the public integrity unit that looks into political corruption and put one member from it in every local attorney general's office across the state. "There are already plenty of statutes that give the office lots of authority. There are restraints on jurisdiction in certain areas, but the [attorney general] has broad authority over misuse of public funds," said Schneiderman.

Schneiderman said that he has already been leading a change in the culture of Albany, including chairing the Senate committeethat recommended the ouster of Sen. Hiram Monserrate after he was convicted of misdemeanor assault.

Representatives of good government groups say they would like to see the attorney general have more oversight. "Anything that would increase oversight is warranted until the legislature can pass ethics legislation with independent oversight," said Lerner.

"The problem is that laws of jurisdiction prevent the attorney general from looking at things unless they are invited," Horner said. The Legislative Ethics Commission, which has the job of investigating corruption, is relatively useless, he said. Any cases they investigate would be referred to the attorney general, but Horner says the office does not initiate its own investigations and rarely -- if ever -- looks into possible ethics violations. "The attorney general can't do much about it. It makes a lot of sense to me that someone besides the commission should have oversight," he said.

At the same time, some note that it's not just the powers granted to the attorney general that determine whether corruption gets prosecuted. The attitude and priorities of the office's occupant makes a difference too.

"If there is a will there is a way," said Baruch College Professor Doug Muzzio. "They've got substantial powers to investigate political corruption; we've seen that with Espada and Troopergate."

"There has been reluctance in the past for elected officials to take on the system that got them there," said Horner, adding, "I think Andrew has run as the 'Sheriff of State Street,' and he delivered."

Espada, on the other hand, has alleged that Cuomo's investigation is politically motivated -- a punishment for Espada's role in orchestrating last year's Senate “coup.”

Others have alleged that Cuomo has been eager to go after Espada because federal investigations into the abuse of nonprofits by senators are heating up, and he does not want to look as though he has been sitting on his hands. They say the Espada investigation is a perfect lead in to Cuomo's announcement that he will run for governor.

Still others worry that giving the attorney general more power could lead to political abuse. "Would the consolidation of powers or enhancement lead to an overzealous (attorney general) looking to make a name for himself?" asked Muzzio. "I don't know. It's just a question. It could provide the condition for abuse."