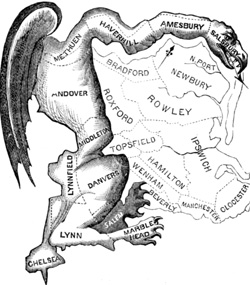 Elkanah Tisdale (1771-1835)
This 1812 cartoon of legislative districts in Massachusetts shows the original gerrymander -- a division of the state aimed at boosting the fortunes of Gov. Elbridge Gerry and the Democrats.

On Nov. 2, voters in California and Florida approved measures on the ballot to take the politics out of drawing legislative district lines.

In New York, the voters do not have the power to go to the ballot to change the redistricting process. That leaves it up to Gov.-elect Andrew Cuomo and the State Legislature to decide whether to keep redistricting in the hands of legislators or enact reforms to create a more independent process. With the state receiving census data from the federal government by April 1, 2011, and new districts needing to be drawn before the 2012 legislative elections, the clock is ticking on this important issue.

Cuomo and a majority of members of the legislature have expressed their support for change. But whether that will become a reality in time for the upcoming redistricting remains to be seen, along with how the governor, legislators and advocates will draw independent lines.

Line drawing, known as redistricting, occurs every 10 years after the completion of the U.S. Census to ensure that the all citizens are equally represented across congressional, state legislative and local council districts. The next round is slated to begin in 2011.

When legislators draw their own lines -- as is the case in New York -- it often becomes inherently political. Known as "gerrymandering," lines are configured in the best interests of the elected officials who draw them. (The term "gerrymander" was from a district formed in Massachusetts under Gov. Elbridge Gerry, which resembled a salamander, hence "gerry-mander.")

To avoid this, California recently formed a citizen redistricting commission, made up entirely of members of the public. In New York, the majority party in each house of the state legislature appoints the members of the Legislative Task Force on Demographic Research and Reapportionment or "LATFOR," which draws the maps. In addition to drawing their own lines through LATFOR, the leadership also draws lines for New York's congressional districts. The political decisions made by line-drawers can split natural communities, create oddly shaped districts and reconfigure lines to put potential challengers out of districts, sometimes by only a block or two.

The task force's maps must be approved by the legislature and the governor, although the last two governors signed the plan into law with little input.

In 2011-2012, , the Democrats will draw lines for the Assembly, and the Republicans will draw lines for the Senate as was the case in the last three redistricting cycles. From 1975 to 2008, Republicans controlled the Senate and Democrats controlled the Assembly in what was the longest standing partisan split in state legislatures across the country.

This in no small part was due to the way district lines are drawn. Some also blame the state's redistricting process for the dysfunction in Albany. Though it has been criticized for decades by good government groups, editorial boards and those elected officials or challengers who have been disadvantaged by gerrymandering, New York has kept its redistricting process.

Now observers think the time could be ripe for change, with public confidence in state government at an all-time low. Many candidates promised redistricting reform during their campaigns for office this year -- including Andrew Cuomo.

As far as the specifics, Cuomo states that an independent commission must be "diverse in every sense of that word," and not motivated by self-interest, as is the case when legislators draw their own district maps. Cuomo alludes to criteria for drawing the lines, stating that the commission would be driven by the values of population equality, contiguity, compactness, minority representation, and preservation of communities of interest and pre-existing administrative boundaries.

Working with the Legislature

For redistricting reform to become a reality, it must have support from members of the legislature -- the very people who have benefited from the current configuration of lines. In the last year, however, the legislature has begun to take steps in support of redistricting reform and the creation of an independent commission. In 2010, two Senate committees -- elections and government operation -- passed the Valesky/Gianaris legislation. The Assembly Governmental Operations Committee passed the bill as well. The Senate is set to hold hearings on redistricting, at which Democratic Sen. Martin Dilan, the current Senate co-chair of LATFOR, will preside. These will focus primarily on the criteria used for drawing the lines (of course Dilan will not hold this post next year, when Senate Republicans take back the majority).

During the campaign season, NY Uprising, a group formed by former Mayor Ed Koch in conjunction with Citizens Union (the sister arm of Citizens Union Foundation, which publishes Gotham Gazette), asked candidates to pledge their support for an independent redistricting commission. A majority of the incoming legislators signed on, backing strict criteria for drawing lines like those in the Valesky/Gianaris legislation. NY Uprising has secured the pledges of over three-quarters of senators, including 31 of the 32 incoming Republican senators with Dean Skelos, the Republican leader, among them. In addition, incoming Republican Sen. Mark Grisanti from Buffalo, who did not sign the pledge, states on his campaign website that he aims to "establish a nonpartisan citizens apportionment commission."

NY Uprising also has secured the pledges of 22 of 30 incoming Democrats in the Senate, and two additional Democratic senators are already co-sponsors of the Valesky legislation, yet did not sign the pledge.

The Assembly also appears to have a majority in support of an independent commission, including a majority of the Democratic conference. Though Assembly Speaker Sheldon Silver has not signed the pledge, he has indicated publicly a willingness to consider a change to the process. While most Assembly Democrats did not sign the NY Uprising pledge, many of those members are co-sponsors of the Valesky/Gianaris legislation. Taken together, those who support the bill or signed the pledge make up a firm majority of the Democratic conference. When adding the Republican support in the Assembly, over two-thirds of members support the creation of an independent redistricting commission.

Silver stated in September that he will not "stand in the way of redistricting reform." Koch has subsequently met with Silver and said he believes Silver is moving closer to supporting reform.

Democratic Assemblymember Hakeem Jeffries, who has been a strong supporter of an independent redistricting commission (and was infamously drawn out of the district held by then-incumbent Assemblymember Roger Green in 2002 by a couple blocks), believes that Cuomo will have the speaker's ear on reform.

"Speaker Silver has expressed openness to considering the issue of redistricting reform, which should permit Gov.-elect Cuomo to jumpstart a meaningful dialogue with the Democratic conference in the Assembly on this issue," said Jeffries. "It will be important for him to approach reform with a firm but sensitive hand, understanding that this is an issue that some members view as a matter of political life or death."

Others, including NY Uprising, are also confident that there will be sufficient support from the legislature. "Gov. Cuomo will certainly have opposers to reform, but we are confident that he will mount an effective campaign to pass redistricting reform. â€¦ It is no easy fight, but it will succeed," said Mark Botnick, a spokesperson for NY Uprising.

Pledges, of course, are not action. Koch has said he will use a <a-href="http://nymag.com/news/intelligencer/encounter/66467/">strategy of shamingmembers who do not keep their promises by going into their districts and letting their constituents know they are "liars." Cuomo seems likely to a take a softer approach, given the pushback that former Gov. Eliot Spitzer received when he threatened to go into the home districts of legislators. Cuomo, after all, will need to work with the legislature on a number of issues if he hopes to fulfill his campaign promise to turn the state around.

Given that many feel there will be change of some kind in the redistricting process, it remains to be seen how independent a new commission will be and how strict the guidelines will be for drawing districts. Should the legislature create a commission not seen as independent enough, members of the Senate and Assembly risk criticism from those who have long opposed the current process, and potentially the governor.

Cuomo has stated that he would veto any redistricting plan that "reflects partisan gerrymandering." Some feel that will serve as a kind of insurance policy to push the legislature to act in 2011.

"There will be legislation calling for an independent commission, because Cuomo has stated that he will veto the lines if there is not. The state must face these issues with the 2012 election approaching," said Botnick. "Albany is looked down upon by governments across the country. Legislators want to change that perception and become leaders."

The State Budget as a Distraction

Given the enormous budget challenges facing Cuomo as he enters office on January 1, 2011, there has been some <http://nymag.com/news/intelligencer/69382/>speculationthat redistricting reform could be used as a bargaining chip in the fight to change the state's costly pension system.

Should the budget be passed on time, the legislature will have the remaining months of the session to deliberate on redistricting reform. They then could enact a bill before they go home for the summer.