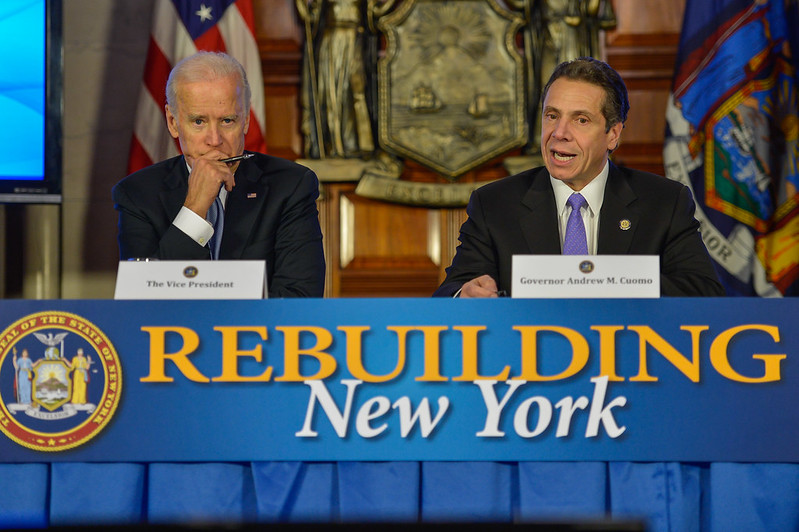 President Biden’s stimulus package is proceeding down the legislative path in Congress. This is great news for New York residents and for New York governments’ beleaguered budgets. The $1.9 trillion plan includes $350 billion for State and Local Governments, Tribes, and Territories.

The monies will likely be apportioned in a manner similar to the earlier stimulus package, meaning that New York State, at 6% of the nation’s population, would get close to $21 billion to shore up the budgets of the state government, the city government, and the rest of New York’s municipalities. New York residents would, of course, be getting the direct checks and increased unemployment aid that are outlined through September 2021. The income cutoff levels for the direct checks are still being negotiated and, of course, the final package could still be modified.

A respite of this magnitude could not be more welcome. The city and state governments will effectively get a two-year grace period for their economies to recover from the COVID-19 recession, with budgets heavily sustained by federal aid until the 2023-2024 budget year begins in April 2023. The dimensions of the new federal aid are extraordinary, but there’s no doubt New York will hit a fiscal cliff when the federal money runs out.

How the Biden Plan Will Help New York
The plan working its way through Congress far exceeds Governor Cuomo’s initial expectations about federal aid in the coming state budget, due for adoption by April 1. Governor Cuomo’s 2021-2022 Executive Budget, submitted to the Legislature on January 19, anticipated a baseline of $3 billion from the new stimulus plan for each the coming fiscal year and the 2022-2023 fiscal year, or $6 billion over two years. The table below presents that assumption. Note that the federal receipts are new anticipated funds, not reflecting the already substantial infusions of federal aid provided in 2020 or 2021 thus far:

The table below is from the submitted Executive Budget showing how a federal funds infusion of $15 billion could offset widespread budget cuts and tax increases in New York over the next two years: 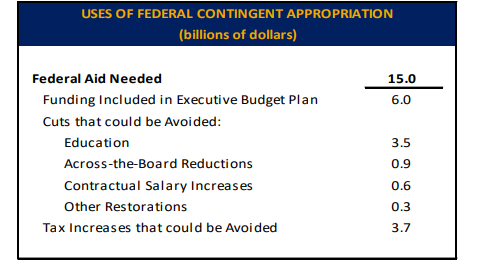 New York’s potential aid in the Biden plan, at an estimated $14 billion, is close enough to the governor’s estimate above to hold New York State’s budget harmless from spending cuts and tax increases for two years. That does not count the additional aid of $7 billion that could be passed through to local governments, assuming New York got a full $21 billion share of the $350 billion aid package for State and Local Governments. The table above does not factor in Enhanced Federal Medicaid reimbursement of an additional $2 billion for New York State approved by the Biden administration after the Executive Budget was released, or funds from Biden’s COVID-19 assistance plan for schools.

A Fiscal Cliff in Spring 2023?
The governor’s budget plan uses federal aid as a substitute to replace state spending. As a result, if no underlying adjustments were made to state revenues and expenditures that were temporarily being replaced, significant deficits would likely reappear in the 2023-24 state budget, even assuming the economy is finally recovering.

The governor’s budget forecast a $6 billion deficit for New York State in fiscal year 2024, which starts April 1, 2023. That forecast assumed the Legislature would enact his proposed tax increase on very wealthy New Yorkers, bringing in $2 billion a year, budget cuts of $3.5 billion in 2021-22, and addressing, in a manner not specified, a 2022-23 deficit of about $3 billion. Failing to enact the spending and revenue adjustments in the new budget due by this April 1 would add to the 2023-24 deficit forecast of $6 billion, adding $5.5 billion to that deficit for a resulting $11.5 billion that year with the extraordinary federal aid in the Biden plan exhausted.

In fact, no one knows what the course of the economy will be over the next two years, along with the state and the city budget deficits. The recovery will be driven by the success of the COVID-19 vaccine and its distribution. New York State coped with a similar size deficit, about $10 billion, in 2011 when the two years of aid from the Obama stimulus package expired, with painful budget cuts. Fortunately, the national and state economies became robust at that time. Once again, New York must restore the health of its economy, and that means the health of the New York City economy, which over the past ten years has been 70-80% of the state’s job growth.

A New York City Comeback?
New York City will have to come back from what may be its most damaging decline since the fiscal crisis of the ‘70s, or even the Great Depression. Tourism and hospitality, the arts, entertainment, culture, international investment, all the prime elements of a premier international city in a global economy, have all been devastated. New York City lost 12% of its employment between December 2019 and December 2020 and nearly 60% of the state’s job losses were concentrated in the city.

The city recovery has lagged the state and nation since the country’s covid lockdown. In fact, the City has only recovered 361,000 of the 944,000 jobs it lost between February and April 2020, or 38%, while the rest of the state outside the city has recovered 52% of its job losses, according to the New York State Department of Labor (my calculations of its data). The January 2021 jobs report just released by the Federal Bureau of Labor Statistics showed the nation as a whole has recovered about 12.5 out of the 22.4 million jobs lost since February 2020, or 56%. New York City Comptroller Scott Stringer’s latest weekly report shows the city economy’s employment growth has stalled since October 2020 (and jobs actually declined in December). It’s not clear that a healthy recovery can really begin until a massive number of New Yorkers has received the vaccine, possibly not until late summer or early fall.

Are New York’s leaders up to the challenge? Can a governor known for his competence but unwillingness to work with others come to grips with a State Legislature with far more progressives in both houses? Can a new New York City mayor halt the state’s discriminatory treatment of the city and actually engage with the governor? Can a consensus about how to solve New York’s problems really be achieved in this divisive era? One thing: the leaders are all Democrats. Can they hold together and chart a path that will keep New York successful?