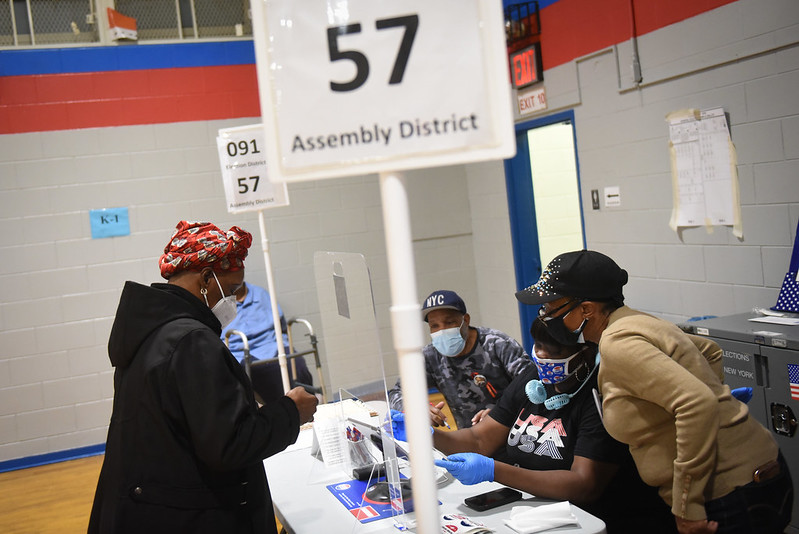 I moved from Manhattan to Maine in early 2020 to run the Democratic Party’s inaugural voter protection team in the Pine Tree State, trading lox for lobster rolls and the deep blue West Village for a purple battleground. But while Maine still had a Republican senator and had only recently dumped proto-Trump Governor Paul LePage, it did have one major liberal leg up on New York: far more voter-friendly ballot access laws.

Here in the Empire State, the Constitution bars no-excuse absentee voting and same-day registration, we choose city officials in off years, and a patronage-addled Board of Elections system prevents career professionals from running our elections. These endemic issues leave New York straggling on voter participation. Compared to other states in the Northeast, we’re dead last. On one front of fairer and more representative democratic processes, though, New York City is finally catching up to the redder Maine electorate: we now have ranked-choice voting.

Unfortunately, many New York leaders—including progressives who should be celebrating this improvement to our democratic processes, and some of the candidates competing in the races for mayor and other offices—are parroting fear-mongering talking points about RCV straight out of the LePage playbook. This rhetoric misinforms New Yorkers and risks a failure to fully reap the upside of a more engaged and energized electorate.

Worse, misplaced criticism of RCV can stoke distrust in the integrity of the election; after living through propagation of the Big Lie about the 2020 presidential race and the resulting insurrection, that’s the last thing we should want to emulate in the Big Apple.

On a recent episode of the Max & Murphy podcast, for example, two former mayoral candidates, former City Council Speaker Christine Quinn and former Comptroller Bill Thompson, were among the latest Democratic leaders to misguidedly criticize RCV. Ranking candidates might depress turnout by confusing voters, they said. Besides, we don’t need it, since we already have a diverse City Council. And it’s easier for voters to decide on one candidate than to make decisions more complex than A vs. B. And only a few places in America use RCV: is it really necessary here?

Quinn and Thompson aren’t alone in driving this narrative. Mayoral candidates Eric Adams and Ray McGuire have spoken out against RCV; an Adams spokesperson said the Brooklyn borough president is “deeply concerned that ranked choice voting will disenfranchise voters of color.” As of May 21, neither Adams nor McGuire had even confirmed that they would accept ranked-choice results.

Beyond the candidates, six City Council members, including Majority Leader Laurie Cumbo, unsuccessfully filed suit in December 2020 to delay RCV’s implementation. Just this week, Cumbo and three other Council members—endorsers of Adams and Andrew Yang, who is now lagging in some polls—introduced new legislation to repeal RCV. The repeal would still have to go in front of city voters as a charter amendment, but these electeds are doing all they can to undermine voters’ faith in our voting processes just weeks before we go to the polls.

While concerns about RCV may be sincere, they are simply not borne out by the facts—nor by the experiences of Mainers, who have been voting via ranked-choice for years. They have twice affirmed their preference for RCV in statewide ballot referenda; once voters get a taste, they don’t want to go back. That’s because plurality voting, though we’re used to it, has obvious drawbacks. With eight major candidates on our Democratic mayoral ballot, a candidate could come in first with just 20% of the primary vote—around what the current first-place candidates are getting in polls—and then advance to a lower-turnout two-person runoff with another candidate who polled even lower in the initial balloting.

Even the old runoff system didn't guarantee broad consensus on a party nominee. Multi-candidate primaries that didn't require the 40% threshold for a win without a runoff -- races for borough-wide and City Council seats -- were decided with a winner getting less than that amount nearly 30% of the time. And in the last open mayoral primary, Bill de Blasio narrowly dodged a runoff with just over 40% of the vote: he was the first choice of just 282,000 New Yorkers, less than 3.5% of the city’s 2013 population and it was enough for him to end up in Gracie Mansion given the uncompetitive general election.

That fact alone is galling, and it’s augmented by the circumscribed campaign strategy it incentivizes: just marshal a small block of die-hards, perhaps along demographic or geographic lines, and forget appealing to voters citywide. If this sounds familiar, it’s because Donald Trump won the Republican presidential nomination riding a similar wave of plurality-winner-take-all primaries. New Yorkers should want an election system that is as representative as possible, and that means one where a primary winner has to be near the top of most voters’ lists. Indeed, New Yorkers do want RCV: the switch was chosen by a 3-to-1 margin in a 2019 referendum.

Moreover, as progressives, we pride ourselves on following facts, and social science research proves that RCV has its intended impact. Directly contravening the assertions of RCV critics, studies show that RCV drives higher turnout by engaging more voters (with multiple studies showing a roughly ten-point increase), leads to more civil elections given the candidates’ needs to reach more voters, with RCV voters reporting greater satisfaction with the tone of campaigning; and leads to elected officials of greater diversity, specifically benefitting women and candidates of color.

On Max & Murphy, Quinn said we already have a racially diverse City Council, but it still underrepresents women and AAPI New Yorkers. And we’ve only had one non-white mayor—and no woman, as Quinn knows first-hand. There is no reason to be satisfied with our electoral status quo, especially given the terrible turnout we often see in citywide elections. RCV is a time-tested and data-driven solution to these problems.

Both Quinn and Thompson also spoke for many critics in calling this first covid-era citywide race “the worst time” to roll out RCV, implying that pandemic restrictions are forestalling face-to-face voter education. But we should take the opposite view: the high levels of attention on the open mayoral race makes it a remarkable opportunity to excite every voter with their ability to choose more than one candidate. Far more alienating than ranking multiple candidates would be a voter picking just one of over a dozen people, each with little chance to win—far worse would be conducting a primary election in which 80% of voters could see their candidate come up short.

Education is more than possible with proper political will. Last year, I led an effort to ensure all of Maine’s general election voters—roughly the same number who will likely vote in our primary in June—could successfully request, complete, and return their ballots. Our educational lift was huge. Unprecedented numbers of citizens learned to request absentee ballots to cast by mail; at the same time, we worked to expand early voting opportunities and get the word out; and, after our advocacy, Maine rolled out new methods for curing defective ballots so they’d be counted even if voters made small mistakes.

We saw record turnout—including myriad first-time and non-English-speaking voters. Maine is home to many immigrant voters who speak Somali and Arabic and others who are native speakers of Spanish and French. Learning how to register, get a ballot, return it, and cure it: these were the obstacles that threatened to keep voters out of the process. Filling in first-choice and second-choice circles next to candidates’ names was far more intuitive than navigating the broader bureaucracy of election administration.

Now it’s our turn. Not only will RCV be better for New York voters this year, but it will drive more engagement with local elections over the long-haul. By embracing RCV, we can foster a more aware and activated electorate that expects better from elections administrators and demands more from the officials we put in City Hall—even if those officials aren’t the number one choices on our ballots.

My experience as voter protection director for Joe Biden and down-ballot Democrats in Maine threw into stark relief how important all (small-d) democratic reforms are. After the January 6 insurrection and the raft of suppressive laws being churned through state legislatures that followed Biden’s victory, the task of reinforcing our democracy is even clearer. Any process to increase voter participation and representativeness in our elections and government is crucial far beyond the implications of any one race; the dots from a ranked mayoral ballot to a thriving American democracy are, to me and other voter protection professionals, easy to connect.

Thankfully, the Campaign Finance Board is running a $2 million education campaign, and initial skeptics like the New York City chapter of the NAACP are getting on board, among many other education efforts by the de Blasio administration, local civic groups, and others. It’s time for the rest of New York’s political leaders, and the still-mum mayoral candidates, to connect the dots on RCV—for themselves and their constituents. Besides, we’re the greatest city in the world. If Farmington and Fort Kent can do it, the five boroughs certainly can too.