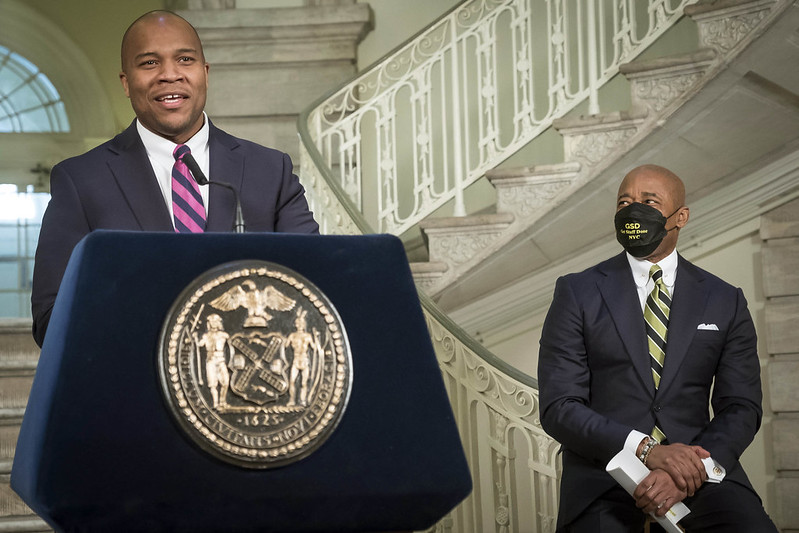 The de Blasio administration acknowledged that New York City desperately needs a Digital Service Organization (DSO) when it announced less than a month before the mayor left office that it wants to hire people for a new “NYC Digital Services” unit that would apply best practices in modern, open-source software development to New York City’s many software and technology challenges. Within two weeks of those first job postings going out, the inevitable happened: Mayor Adams announced a new Chief Technology Officer (CTO) for the start of his administration on January 1.

The new CTO is Matthew Fraser, and thanks to Adams’ Executive Order #3, he will be in charge of a newly-created Office of Technology and Innovation that will consolidate nearly a half dozen existing technology agencies and units under its leadership, including the Department of Information and Technology (DoITT), Cyber Command, 311, and the Mayor’s Office of Data Analytics (MODA).

So who is Matthew Fraser and what does he need to do?

A simple search for “Matthew Fraser New York City” on Google turns up Linkedin and Twitter profiles that give us some clues that can help us answer the question City & State New York flatly asked, “Could Eric Adams’ new tech chief bring NYC out of the dark ages?”

Fraser’s Linkedin shows that he was Deputy Commissioner and Chief Information Officer of the NYPD for nearly two years. Before that he worked at Gartner, a technology consulting corporation, as a Director of Consulting Services. And before that he served for four years at NYPD doing technology strategy and nine years doing technology project management for “the City of New York.”

To my knowledge, the NYPD has not adopted any of the DSO-style practices for which I and many other technologists frequently advocate. The NYPD has no presence on Github, which is a popular code sharing platform where many prominent DSOs such as the federal government’s 18F and the United Kingdom’s Government Digital Service publish code, gather user feedback, and recruit technical talent. Indeed, NYPD clearly doesn’t care about Github as the github.com/NYPD profile is owned by someone with an anime avatar. From the perspective of the DSO community, which views posting code and issues to Github as a core tool in their workflows, NYPD’s Github situation is one degree more embarrassing than DoITT’s empty Github profile. At least DoITT has secured a decent screen-name!

Gartner is well-known as a technology research company, but also one of the guardians of the existing technology status quo and a primary pusher of the type of expensive proprietary corporate software that has failed New York City government agencies and residents over and over and over again.

Gartner and its big corporate IT software vendor peers view the open source-based DSO movement as a threat to their core business. They know that if New York City gets good at using open-source software to build its own solutions, then proprietary IT vendors can kiss hundreds of millions of dollars of contracts goodbye. Don’t take my word for it. Look at how the "Gov Tech" industry lobby groups reacted to the success of 18F, the country’s largest DSO. It aggressively lobbied Congress to undermine 18F’s ability to compete with corporate vendors!

But just because Fraser worked for Gartner and the NYPD doesn’t mean he’s beholden to the IT vendors that orbit those entities or that he won’t be able to deliver modern digital services to New York City residents. Let’s look to Fraser’s Twitter profile for more insights.

On Twitter, as of January 20th 2022, the @NYPDTECH handle still carries Matthew Fraser’s name and picture, and a banner image displaying CompStat, the police department’s data-centric crime-reporting tool. The content of the feed is generic NYPD stuff – nothing particularly tech focused. We do get this short but kind of charming video of Fraser talking about his work and perspective. But we can also read between the lines.

Fraser, in this Twitter profile, is the embodiment of NYPD technology. And if there is one thing Mayor Adams has made clear about his plans for the city, it’s that he wants to CompStat New York City.

CompStat is a system for collecting, analyzing, and visualizing policing data, first pioneered and launched in New York City in 1994 and now utilized throughout the world. It’s not a specific computer program but rather an approach to using databases, GIS, and data analysis tools to organize information about crime and policing, which is then used for situational awareness, success metrics, commander assessment, accountability, and more. The NYPD, and Adams, are extremely proud of CompStat.

From the New Yorker article:

Adams was part of a team that helped put together the early versions. “I was just this computer geek,” he said. “We were building out the first layers of this new form of thinking. We had no idea we were going to make this impact. Trust me, it was unbelievable.”

Indeed, the NYPD loves data reports and dashboards, and if Fraser’s Linkedin Activity is any indication, putting them together is a big part of his work. A quick analysis of the reports and dashboards section of the NYPD website reveals they’re relying on proprietary Microsoft technology, not the open-source technologies that a DSO would use to build the same type of interfaces.

It’s probably fair to say that Fraser isn’t as familiar with open-source solutions as many civic technologists would like him to be, but that’s also OK. Anyone who builds real systems that have real users knows that you’ve got to build with what works. And if Microsoft is delivering for the NYPD, and they’re doing so for about $2 million per year worth of contracts, then so be it. But the challenges he’s about to face will require far more complex work.

As head of NYPD technology, Fraser has had the benefit of working within a single agency, controlled by a central bureaucracy with a (somewhat) unified system of contracting and assembling technology solutions. In his new role he has a mandate to integrate the city’s main cross-agency technology programs into a coherent strategy, and he will inevitably come up against many of the same problems that arose when the Obama administration first attempted to launch their HealthCare.gov program, which ambitiously attempted to tie a lot of proprietary software made by different commercial vendors together. It failed massively.

A tremendous amount of ink has been spilled about why healthcare.gov failed initially and the crack teams that emerged to fix the problem using open-source components and startup-style development strategies. After fixing HealthCare.gov, those people went on to organize the federal government's first DSOs: the US Digital Service and 18F.

Now, 10 years later, there is a tremendous wealth of books, best practice manuals, organizational models, and open source code available to help overcome the difficulties of building modern digital services inside government. Thanks to all these advances, it has never been easier, technically-speaking, to fulfill the ambitious, reasonable (and dare I say essential) dream of CompStat for the city.

But to access this wealth of knowledge, Fraser will have to venture out of the comfortable world of proprietary software vendors and monolithic contracts and into a less familiar — but very friendly and collaborative — open-source ecosystem of government digital services. If he and Adams are truly guided by the higher purpose of revolutionizing municipal government in the vein of how CompStat revolutionized policing, then they could be a massive success.

Technologists all over this city are rooting for Fraser and Adams, and I have no doubt many would be willing to roll up their sleeves and get to work on the city’s behalf if Fraser indicates he is ready, willing, and able to adopt DSO practices.

A good first step: organize a presentable Github profile for his new office.