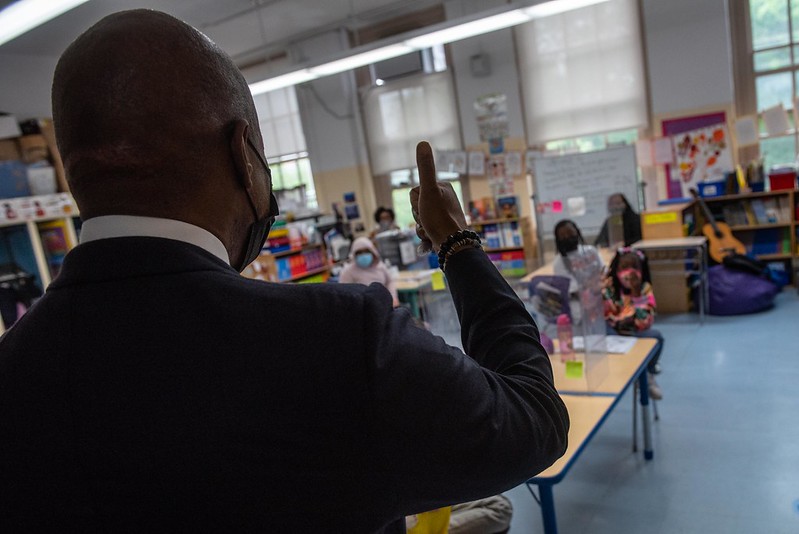 After two-and-a-half years of a chaos and disruptions due to the covid pandemic and a change in mayoral administrations, many parents, teachers, and advocates were yearning for a steadier, supportive, and safe re-opening of a new school year, in which students would get the attention and the stability they need. Sadly, that  does not seem to be in store.

The pandemic is not over, no matter how much one may wish for it. The covid test positivity rate at 8.5% in New York City is still quite high, and while in general students appear less prone to the negative effects of the virus, the long-term impact of covid among children remains a serious concern. And even if not seriously ill themselves, they can still transmit the virus to their teachers or bring it home to their family members. Unlike previous years, this year’s covid safety protocols will be few.

Less than half of New York City children are fully vaccinated (at least two doses) against covid.  There is no longer any mask mandate and no in-school screening for covid, no attempt at social distancing, and the air purifiers that the Department of Education purchased for schools are widely considered to be inferior. All this bodes poorly for the opportunity for children and their teachers to have a smooth and uninterrupted school year.

Another source of instability is the fact that Mayor Eric Adams is intent on making huge budget cuts to schools. Though initially the Department of Education claimed that the total reductions to schools would be $215 million, that turned out to be untrue. The City Comptroller has estimated that 77% of schools have suffered $469 million in cuts to the portion of their budgets allocated through the Fair Student Funding formula. Class Size Matters’ analysis of  the schools’ entire budgets indicates that as of August 21, their total funding had been reduced by $1.3 billion,  and projected that by the end of the school year, the total reduction would be about $1 billion compared to last year, as about $300 million was added after that date last year. A billion dollars is also the amount that has been slashed from the Department of Education’s entire budget.

After 45 out of 51 City Council members voted to approve the city budget late in the evening on June 13, many quickly came to regret their votes when they faced the anger of their constituents as the impact of these cuts on individual schools became clear.  Many schools reported having to let go beloved teachers and social workers, others have been forced to eliminate art and music programs. Council members said they had been deceived by DOE officials, who had assured them that the budget cuts would have no impact on current staffing or programs but would only eliminate positions already unfilled. Chancellor Banks’ response was that the Council had failed to “ask all the questions that needed to be asked.” By the end of July, 700 teachers had been excessed from their schools, though since most still remained on the DOE payroll, it remains uncertain what actual budget savings this will produce.

On July 18, parents and teachers filed a lawsuit to try to block the cuts, pointing out that the City Council vote had preceded by ten days the vote on the budget by the Panel for Educational Policy, in violation of  state law. While the DOE had claimed an “emergency” superseded the PEP vote, the plaintiffs pointed out there was no such emergency,  and that the DOE had made the same claim with the same boilerplate language in 12 out of the last 13 years. They demanded that the Council have an opportunity to revote subsequent to the PEP vote in the proper order as specified by state law. Supreme Court Judge Lyle Frank ruled in favor of the plaintiffs on August 5, and ordered last year’s school budgets reinstated until the City Council had a chance for a revote. But the Adams administration appealed his decision, and the Appellate Court ordered an automatic “stay” on Judge Frank’s decision and the restoration of these cuts, at least until arguments in Appellate Court could be held, which are not scheduled until September 29 – long after the school year has begun.

Since their original vote to approve the budget, City Council members have organized rallies, held hearings, sent letters to the mayor, and now approved a resolution to demand that he immediately restore at least the $469 million cuts to schools. Yet Adams has not budged and continues to insist that these cuts are justified by a decline in enrollment. Meanwhile, he has been followed by protests nearly everywhere he goes, with parents and teachers insisting that he restore funding to their schools. He has told them to “keep us in your prayers.” In response, 135 religious leaders released a letter pointing out that the mayor’s comment was a form of  “spiritual bypassing…rhetoric to avoid your responsibilities to the people of this city.”

One of the biggest wild cards amidst all these concerns remains the issue of class size. In early June, after years of advocacy by parents and teachers, the State Legislature overwhelming passed new legislation that would require the city to gradually lower class size in all grades, to achieve caps in five years of no more than 20 students in grades K-3 classes, 23 students in grades 4-8, and 25 students in high school -- levels closer to what class size averages are in the rest of the state.

The research is clear that such class sizes would provide students with a far better chance at success, in terms of achievement, graduation from high school, and a four-year college degree. Yet Governor Hochul has so far failed to sign the bill.  Though she recently indicated that she was inclined to do so in the near future, she also signaled that she was in negotiations with Mayor Adams to propose amendments to the bill, which is worrisome as Adams has steadfastly opposed the measure, calling it an “unfunded mandate.”

As State Senator John Liu and others have pointed out, it is only right and just that the city should finally lower class sizes, given that the DOE is finally receiving the $1.3 billion in additional state aid resulting  from the Campaign for Fiscal Equity case, in which students’ excessive class sizes were central to the court’s decision that they had been deprived of their right to a sound basic education. Yet after that decision was made, class sizes actually increased. It appears that the mayor would like to use the additional state funding, as well as nearly $4 billion in unspent federal covid education funds, for other purposes.

If nothing intervenes to stop him, his destabilizing cuts to school budgets will inevitably result in larger class sizes next year.  What has been ignored in much of the controversy over the bill is how much students benefited last year because their schools were fully funded despite the enrollment decline, and principals were therefore able to keep their teachers and other critical personnel on staff, which in turn led to the smallest average class sizes in the city’s history.

Indeed, the Fair Student Funding formula that schools have relied upon since 2007 to pay for teacher salaries is fatally flawed, given how it has forced principals to keep class sizes excessively large – which in turn, has prevented students from receiving the adequate  support that they deserve. Eighty percent of the principals surveyed in 2019 by a Fair Student Funding Taskforce said that large class sizes were a direct consequence of the formula.

Class Size Matters has heard from many parents and teachers who reported that along with the smaller classes last spring came a serene atmosphere, with the emotional sustenance that many children were lacking after two years of the pandemic. As one teacher put it, “All kids are needier than ever, whether simply needing attention and feedback from teachers or grappling with real trauma.”

As one principal announced, “What is devastating about the recent budget cuts is that 2021 felt like the first time in my 16 years in the DOE where we were getting close to being able to provide all kids with the supports and opportunities they deserved.”

Similarly, a parent of a middle school student reported, “This is the first year after being in NYC public schools for seven years that the teachers are able to provide individualized attention to my child’s social and emotional needs. Her teachers all know her really well for the first time.”

Yet rather than sustain and build on the progress enabled by smaller classes last year, Mayor Adams seems intent on reverting to the unacceptable conditions of the past.

Among the organizations that sent in memos of support for the state class size bill were the Alliance for Quality Education, the NAACP, NYC Kids PAC, the Network for Public Education, and the Chancellors Parent Advisory Council, which represents all the PTAs in the city. Nearly 9,500 parents and teachers have signed a petition urging Governor Hochul to sign the class size bill as soon as possible.

Parents hope that she will do so soon, without significantly weakening its provisions, so that the city’s children will be able to receive the close emotional and academic support that they have long deserved but need now more than ever before.