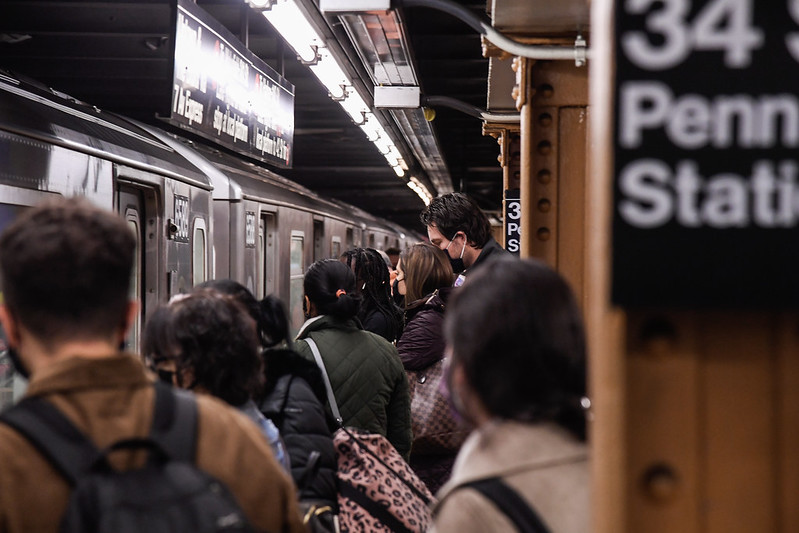 In October 2021, Governor Kathy Hochul signed the Metropolitan Transportation Authority (MTA) Open Data Act, sponsored by Senator Leroy Comrie and Assemblymember Robert Carroll. Hochul said the law will require MTA data to be “properly available for constituents to read and utilize. New Yorkers should be informed about the work the government does for them every day, but we have to make it easier for them to get that information."

The new MTA law is the first open data law passed by New York State and was championed by Reinvent Albany with the support of more than a dozen advocacy organizations. The law is now being implemented by the MTA, a state authority that runs the New York City subways and buses as well as the commuter railroads.

The MTA currently has a $18.5 billion annual operating budget, and is the largest public transit authority in the United States. Before COVID-19 hit, it served 5.5 million daily riders on the subways alone, and millions more on the buses and railroads. It is currently undertaking the largest capital plan in its history, with $55 billion in planned spending on infrastructure. Given the MTA's importance to the region's economy, the authority's operations and spending are of great importance to policymakers, riders, and all New Yorkers. One way to pull back the curtain on how the MTA is doing its job is through greater transparency.

Efforts to increase transparency at the MTA are not new. A decade ago, at the urging of advocates and riders, the MTA began releasing real-time service data as open data to the public via third-party apps like Google. The MTA has since created numerous performance and capital program dashboards, but there is much work to do to consolidate the underlying, raw data and ensure it is updated automatically on the state’s open data portal. The state’s portal provides tabular public data – essentially spreadsheets, mapping data, and other types of data – from the various state agencies and authorities in one place, allowing journalists, advocates, and the broader public easy access to state government data.

This week is Open Data Week, and next week is Sunshine Week. Fortunately, this time around we are optimistic about the future of MTA open data because of the new state law and what the government and the public have learned during the COVID-19 pandemic about the value of transparency.

Now, the MTA can let the open data sun shine on three high-profile and timely concerns: daily ridership numbers and projections for the future as the MTA emerges from the COVID-19 pandemic; the upcoming congestion pricing environmental assessment; and the release of its 20-year needs assessment in 2023.

What Does the MTA Open Data Law Require?
The MTA Open Data Law codifies for the MTA the requirements of Governor Cuomo’s Executive Order 95 of 2013, the state’s Open Data EO that established data.ny.gov. The bill defines what is publishable data and requires the MTA to designate a data coordinator to oversee agency’s compliance.

Under the law, within 180 days – in April 2022 – the MTA must create a catalog of public datasets and a schedule for release of this data within three years. The schedule and catalog will be provided to the Legislature and the public.

What Has the MTA Done So Far?
In October 2021, the same time that the MTA Open Data Law was signed, Governor Hochul asked each agency to produce a Transparency Plan regarding their efforts to increase transparency and release more information to the public, including as open data. The MTA’s transparency plan includes a detailed description of how they will implement the MTA Open Data Law, including deadlines for publishing more data on the state’s open data portal.

The transparency plan also notes that the MTA can reduce its Freedom of Information Law (FOIL) load and costs of producing records by uploading more data to the open data portal. The MTA recently offloaded requests for police incident reports from their FOIL requests into a separate electronic portal. This action was in part spurred by Reinvent Albany’s finding in our Open MTA report that two-thirds, or nearly 6,000, of the MTA’s 9,000 annual FOIL requests were for police incident reports.

Sarah Meyer, the MTA Chief Customer Officer who first came on with Andy Byford at New York City Transit, has been designated as the data coordinator, and will lead the agency’s effort.

The MTA has grown the number of its datasets on the open data portal from 76 to 100 as of March 9, 2022, and intends to publish a number of other datasets in the short term. The MTA’s plans are also detailed on a new website that outlines its efforts to comply with the law, which includes the following timeline:

This timeline importantly includes that the MTA will “automate data updates” – this means that data will not need to be manually uploaded each time there is an update. This is crucial for the sustainability of the MTA’s open data and transparency efforts because automating data release will reduce staff time and ensure it is the most useful to the public.

Opportunities for New Open Data Releases
The MTA’s transparency plan has prioritized getting MTA data that is already published in PDFs up on the open data portal, including data from the MTA Board Books and financial plans, which is an excellent first step. However, there is a wealth of data – including raw data – that is not currently published as open data that is of great interest to the public.

Additionally, when the MTA announces major new initiatives or releases new reports, these are important opportunities for the agency to think ahead about what data should be released as open data.

We recommend that the MTA specifically integrate open data into three upcoming or timely initiatives:

1. Ridership Projections
The MTA’s daily ridership numbers are important markers for policymakers and New York City boosters given the massive decline in ridership that the MTA experienced during COVID-19. The resulting economic fallout from the depressed ridership necessitated billions of dollars in federal aid to keep the agency from going bankrupt.

Additionally, the MTA in July 2020 began using McKinsey, a consulting firm, to project ridership numbers to help show the revenue impact of depressed ridership on the agency as it was seeking federal aid. The McKinsey ridership projections have also been used in developing the MTA’s financial plans. However, future ridership projections have not been released in open data, and have only been shared by the MTA in chart form. The chart below was published by the MTA in October 2021 as part of its board meeting presentation. 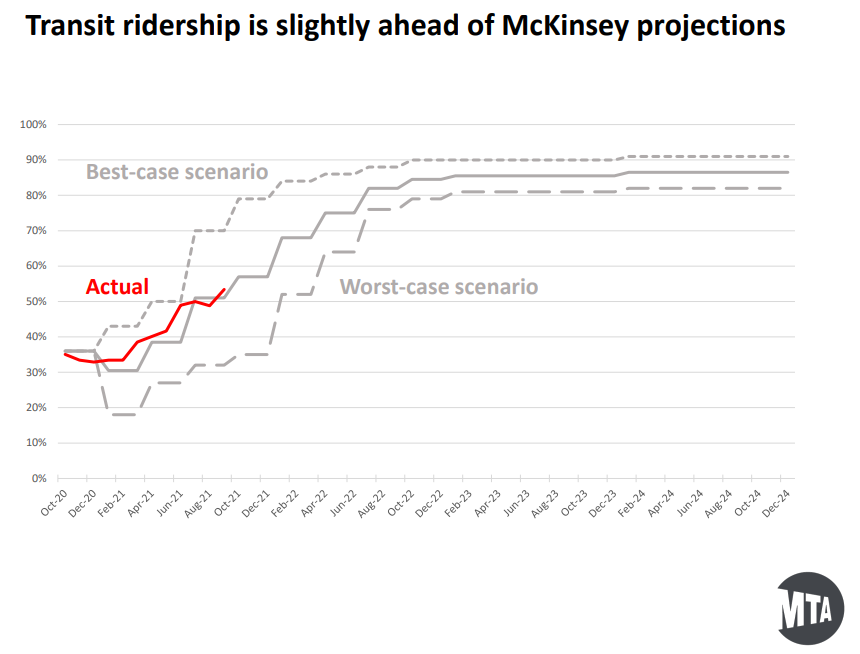 The MTA has said that it intends to hire a new consultant to produce updated ridership projections. As part of its contract, it should ensure that the raw data for the projections is released in an open data format. This way, policymakers, journalists, and advocates will have access to the data to compare ridership with the projections and better understand the MTA’s future.

2. Congestion Pricing Environmental Assessment
The MTA is in the process of conducting an environmental review of its congestion pricing program (called Central Business District or CBD Tolling by the MTA), which is currently slated to start in January 2023 after a two-year delay.

Congestion pricing has been strongly supported by transit and environmental advocates because it will raise $15 billion for the MTA’s 2020-2024 capital program and reduce traffic congestion. This is the single largest funding source for the latest capital program, and will fund critical improvements to MTA subways, buses, and commuter rails.

The MTA is expected to release its draft Environmental Assessment (EA), as required by the federal government, in May 2022 (see the program adoption timeline here). The EA will include a large amount of transportation modeling and analysis, with 14 different scenarios (“model runs”). These will show how different pricing structures, time of day pricing, and discounts and/or toll credits will affect traffic in the region and the effectiveness of the program – including how much money will be generated to fund the MTA capital program.

By law, the program must raise $1 billion annually to support $15 billion in capital bonds. A slide about the modeling and data that is expected to be generated is below, from a September 2021 staff presentation to the MTA Board. 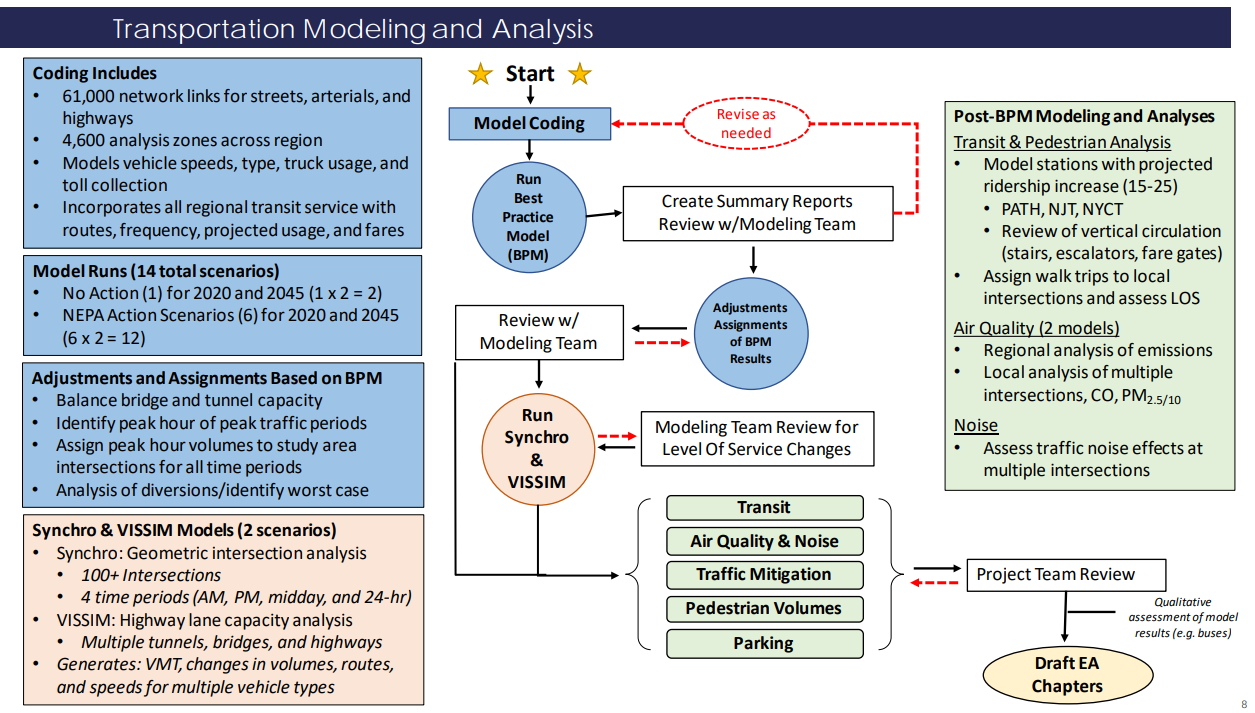 The results of this type of data modeling are typically released as appendices of large PDFs that can be hundreds of pages (a traffic appendix for the now paused LaGuardia Airport Transit Access EIS numbered 353 pages for Part 1, and 300 pages for Part 2). The MTA can and should do better.

Open data on congestion pricing will help advocates help the MTA. If the MTA releases its traffic modeling data in an open data format, this lets the advocates and journalists have easy access to the information that will make the case for congestion pricing, and support the MTA’s efforts.

3. 20-Year Needs Assessment
Before the release of its draft five-year capital program, the MTA has released updates to its 20-year needs assessment, which provide the basis for determining the capital needs of the MTA based on regional population and ridership trends as well as the state of its existing infrastructure and assets. 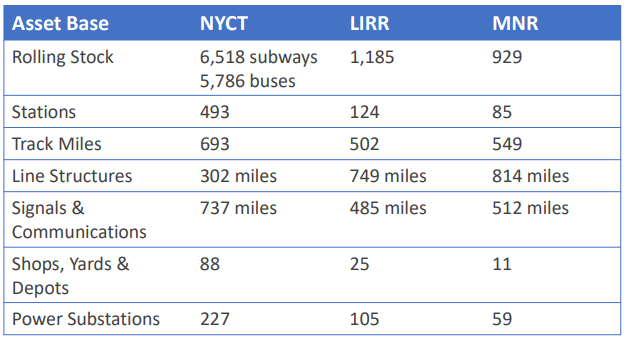 The MTA is now required by law to release its next 20-year needs assessment in 2023, which will be ahead of the adoption of its 2025-2029 capital plan. MTA staff recently presented plans for the assessment’s release. See the graph of some of the broad data on MTA assets that was included in this presentation.

Ahead of the September 2023 release, the MTA should ensure that all the data contained in the assessment is prepared in an open data format. This will help researchers and oversight entities better match the MTA’s assessment of its needs with its capital spending to ensure that the right investments are being made.

See the chart of the comptroller's analysis of the progress made on bus purchases. The analysis shows that spending and commitments to date are below the actual need. 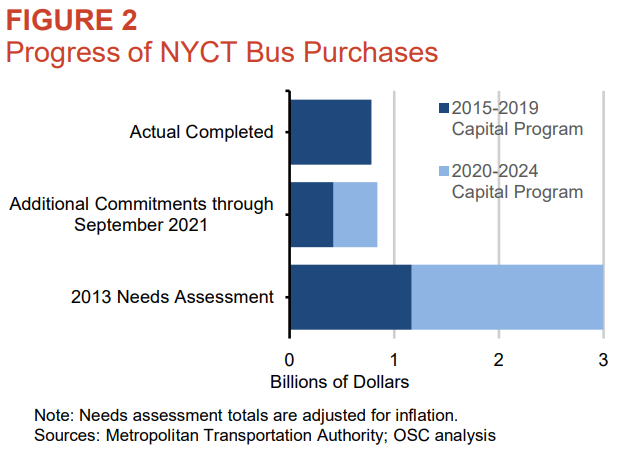 Reinvent Albany previously conducted an analysis of subway cars needed versus those purchased, building off of research by the Citizens Budget Commission. We found a similar lack of investment in subway cars compared to the stated needs, as seen in the accompanying chart. 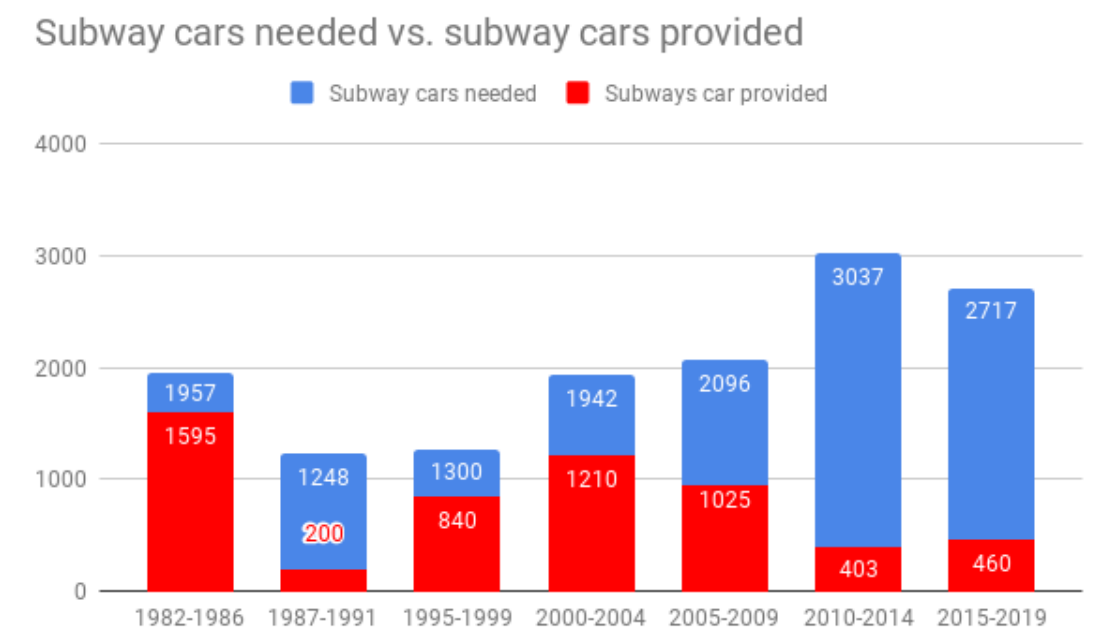 Having the data to be able to match up the MTA’s needs with its spending is crucial for the accountability of billions in capital spending.  Beyond the need for new buses and subway cars, there are large new needs related to resilience and climate change, as seen with the flooding in 2021 during Hurricane Ida and other storms. It is expected that the 2023 needs assessment will include a specific assessment related to resilience.

These three sets of data are just some of the information that the MTA should look to release as open data in the days and months to come. With an annual operating budget of $18.5 billion, the MTA generates a lot of public data that can and should be released to help shine a light on its operations.