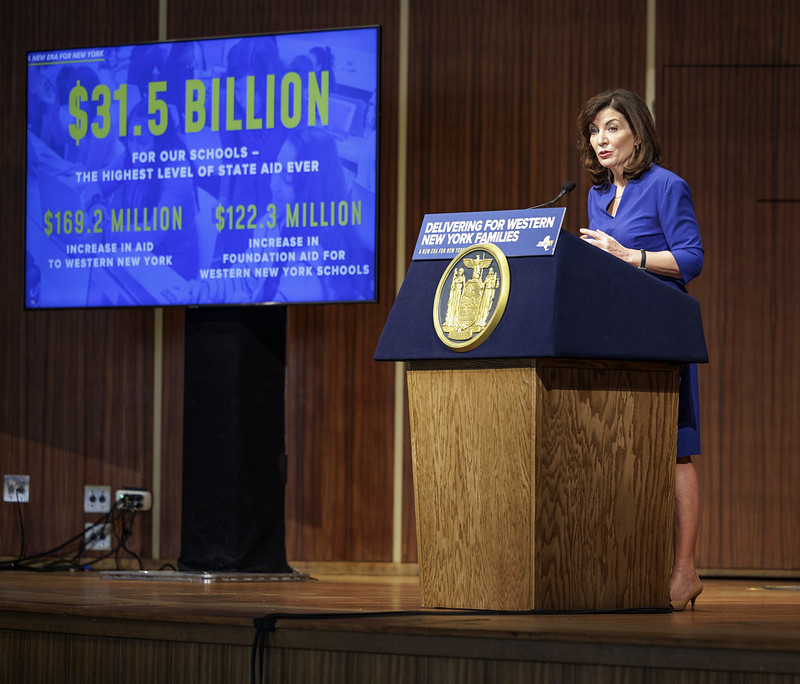 The State adopted its budget on April 9 with substantial investments across the board in helping New Yorkers, from big increases in school aid and child care to homeowner rebates, gas tax relief for motorists, more funding to avoid evictions, bonuses for health care workers, and relief for hospitals and the health care system. Governor Hochul and the Legislature based the revenue and spending assumptions on an update from the Governor in late February, modified by an early March agreement between the Legislature and Governor called the Consensus Revenue Forecast.

Notwithstanding all the healthy increases in spending,  from State Comptroller Thomas DiNapoli reported that $3.3 billion more than had been expected in February had flowed into the State Treasury by the closeout of the State fiscal year on March 31.

There are now billions of dollars, unbudgeted and unappropriated, newly available for the state to utilize beyond those funds in the April 9 adopted budget for the fiscal year that began April 1. These funds don’t include $12 billion in federal aid from the American Rescue Plan already available to the state over the next several years, or $5 billion in surplus state funds already realized, saved, and budgeted as of March 31. The new funds are at least $2.1-$2.5 billion more than the Consensus Revenue Forecast had established as the finalized basis for the State’s budget, and that is even before the month of April 2022 started.

In California, which has not yet adopted its budget, Governor Newsom and legislative leaders are arguing about how to distribute their original $9 billion relief package of gas tax relief and transit aid, versus direct checks to the taxpayers, even as the state’s surpluses keep expanding. Other states across the nation are sending out tax rebates and other forms of relief.

The New York State Division of the Budget has until May 19 to produce the financial plan based on the adopted budget and provide all the baselines for revenue and spending. There are already other indicators, however, beyond the State Comptroller’s report, that the flow of unanticipated largesse will continue. The New York City Comptroller, Brad Lander, reported on May 2 that April is likely to be a record for New York City personal income tax collections.

The close linkage between the New York State and New York City personal income taxes suggests that April’s state tax collections would be comparably healthy, perhaps even billions of dollars more than anticipated. The State Comptroller also reported that local government sales tax collections rose 21% in the first quarter of 2022 compared to that period in 2021. The public should know very soon what the state’s April tax receipts were.

What should the state do with another $4 billion in tax receipts that have come in higher than anticipated, just in March and April? In addition to simply sending out checks, California is considering offering free mass transit. There is also another New York State gas tax that motorists don’t see listed at the pump, because it’s embedded as a wholesale price and is named the Petroleum Business Tax. These offer further avenues for relief before the Legislature leaves Albany in June.

One month’s current revenue from the riders of all MTA systems is a modest $400 million. I handled mass transit in budget negotiations for six years as Chair of the Assembly Committee on Corporations, Authorities, and Commissions, and MTA operations comprise as much as 90% of total mass transit statewide, meaning the rest of all the public bus systems’ revenue for one month in the state would be a mere $50 million. In order to avoid chaos from riders flowing through transit systems for free, each system could offer one free fare for every paid fare, and give all riders four months at a 50% discount for a cost that would not exceed $900 million. The state could advance the funds to the MTA and other mass transit systems and work on implementing two months of a 50% discount after Labor Day.

The state budget provided for 16 cents off the gas tax beginning June 1 for six months, by temporarily suspending the sales and motor fuel taxes on gasoline, providing $584 million in relief. Since the money from those taxes helps pay to cover road and bridge repairs, and some mass transit subsidies, the budget provided that the state’s General Fund cover those needed subsidies for the duration of the suspension.

The petroleum business tax, at the wholesale level, adds another 17 cents on a gallon of gas. The amount of money collected on gasoline sales from this tax is comparable to the amount suspended from the sales and motor fuel taxes ($600 million for six months), and the state could suspend this tax too. It might be too late to implement the suspension by June, but it is implementable by August. Together, the suspension of the three taxes would provide 33 cents a gallon in tax relief for the state’s motorists. The state’s General Fund would have to compensate for the lost subsidies for roads, bridges, and mass transit for the PBT, as it did for the other taxes.

Together, the two new forms of transportation relief would cost the state $1.5 billion, and leave about $2.5 billion of unbudgeted revenue already recognized to appropriate to assist New Yorkers.

What to do with that money? Some states across the nation are simply sending checks to people, with different schemes for assuring almost everybody gets something. The Governor, the Legislature, the Division of the Budget, and the State Department of Taxation and Finance ought to be able to devise a plan. New York full-time residents filed 9.5 million tax returns, and one-third of those filers had no tax liability. This year’s state budget is already delivering relief to many taxpayers in different kinds of ways, but the timing of this relief varies.

In October homeowners making less than $250,000 a year will get a total of $2.2 billion in rebate checks from the state connected to the STAR program property tax relief system. Roughly 2.5 million homeowners are expected to get checks, from a few hundred dollars to up to $1,000, depending on their specific property taxes.

The state is accelerating an income tax reduction begun under former Governor Cuomo, called a middle-class tax cut, with most of the reduction taking place in calendar year 2023 because adjusting the state’s income tax tables and withholding from employers takes time to implement. The benefits might not be very noticeable, a saving of a few hundred dollars a year, spread out over 52 weeks of employer withholding a little less when you get paid.

The state is also increasing the child care tax credit and earned income tax credit benefits. These are good to do, but residents who benefit may have to wait until filing next year’s tax returns to see the additional savings. State taxpayers received the current benefits from these programs at the time they filed their taxes this year.

The state may want to send checks to help residents along very basic lines. For example:

When it comes to spending money, there is no lack of ideas. The critical point is that there is much more money coming into the state treasury than previously anticipated, and a window to give more relief to New Yorkers before the Legislature leaves for the year in just a few weeks.