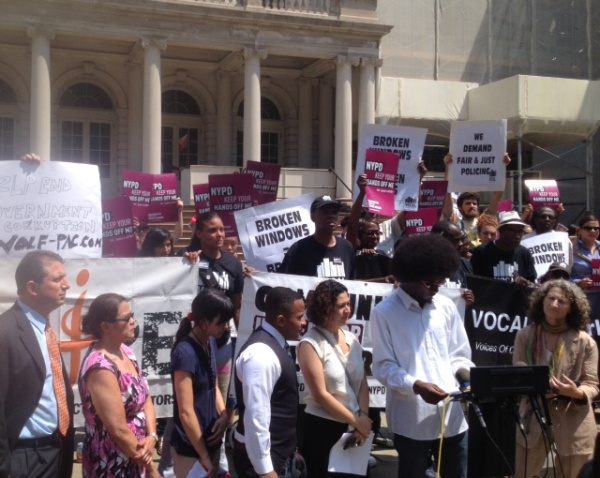 After 20 years of Republican mayors, Bill de Blasio won election on a remarkably progressive platform. Unlike his four previous predecessors, de Blasio pledged to raise taxes on the rich to pay for social services that would benefit the rest of the city. De Blasio's universal pre-K and middle school initiatives are designed to provide important supports for the families and young people most in need. This effort to reduce inequality stands in sharp contrast to the fundamental politics and social theory driving "broken windows" policing. The death of Eric Garner has brought this fundamental contradiction to the fore and demands a substantive response from the mayor.

The Broken Windows theory was first laid out as a kind of hypothesis-by-analogy by criminologists James Q. Wilson and George Kelling in the Atlantic Monthly in 1982. They presented existing behavioral research that showed that when a car is left unattended on a street it is usually left alone, but if just one window of the car is broken, the car is quickly vandalized. The lesson: failure to indicate care and maintenance will unleash people's latent destructive tendencies. Therefore, if cities want to establish or maintain crime-free neighborhoods they must take action to ensure that residents feel the pressure to conform to civilized norms of public behavior. The best way to accomplish this is through the use of police to remind people in subtle and not so subtle ways that disorderly, unruly, and anti-social behavior is unacceptable. When this doesn't happen, people's baser instincts will take hold and predatory behavior will reign in a return to a Hobbesian war of all against all.

The emergence of this theory in 1982 is tied to a larger arc of urban neoconservative thinking going back to the 1960s. Wilson's former mentor and collaborator, Edward Banfield, himself a close associate of Milton Friedman at the University of Chicago, parented many of the ideas that came to make up the new conservative consensus on cities. In his seminal work of 1970, The Unheavenly City, Banfield argues that the poor are trapped in a culture of poverty that makes them largely immune to government assistance:

"Although he has more "leisure" than almost anyone, the indifference ("apathy" if one prefers) of the lower-class person is such that he seldom makes even the simplest repairs to the place that he lives in. He is not troubled by dirt or dilapidation and he does not mind the inadequacy of public facilities such as schools, parks, hospitals, and libraries; indeed, where such things exist he may destroy them by carelessness or even by vandalism."

Unlike Banfield, who in many ways championed the abandonment of cities, Wilson decried the decline of urban areas. Along with writers like Jim Sleeper (The Closest of Strangers) and Fred Siegel (The Future Once Happened Here), Wilson pointed a finger at the twin threats of failed liberal leadership and the moral failings of African Americans as the cause. All three of them argued that liberals had unwittingly unleashed urban chaos by undermining the formal social control mechanisms that made city living possible. By supporting the more radical demands of the later urban expressions of the Civil Rights Movement, they had so weakened the police, teachers, and other government forces of behavioral regulation, that chaos came to reign.

What was needed to stem this tide was a reassertion of social control mechanisms by empowering the police to not just fight crime but to become agents of moral authority on the streets. The new role for the police was to intervene in all of the quotidian disorders of urban life that contributed to the sense that "anything goes."

The Broken Windows theory magically reverses the well understood causal relationship between crime and poverty, arguing that poverty and social disorganization are the result of, not the cause of, crime and that the disorderly behavior of the growing "underclass" threatens to destroy the very fabric of cities.

Wilson, following Banfield, believed strongly that there were profound limits on what government could do to help the poor. Financial investment in the poor would be squandered, new services would go unused or be destroyed, and the poor would continue in their slothful and destructive ways. Since the root of the problem was either an essentially moral/cultural failure or the lack of external controls to regulate inherently destructive human urges, then the solution had to take the form of punitive social control mechanisms to restore order and neighborhood stability. This is why police are arresting people for grilling on the sidewalk, drinking on their front stoop, and, yes, selling loose cigarettes.

The result of this approach has been the mass criminalization of the poor, who in New York City are overwhelmingly people of color. Hundreds of thousands of mostly young black and Latino men are put into the criminal justice system for mouthing off in class, taking up two seats on the subway, and possessing marijuana. In some neighborhoods over 50% of young men are caught up in the criminal justice system. It is a system that drives them from school, undermines future employment prospects, and immerses them in a world of gangs and violence.

Proponents of Broken Windows policing claim that it is responsible for the city's dramatic crime drop. Even a cursory look at the facts shows this can't possibly be true. The crime drop is an international phenomena that has occurred in hundreds of cities that never used Broken Windows based policing. Even scholars who point to a special role for the police in New York, like Franklin Zimring (The City that Became Safe), argue that it was not Broken Windows based policing that made the difference. And further, if Broken Windows policing was supposed to lead to a revitalization of poor communities, why is it that poverty and inequality in New York are growing? Gentrification has improved some physical communities, but through displacement, not the advancement of the people already there.

Disorder can be a real threat to urban stability. Mass homelessness, untreated mental illness, and youth engaged in graffiti, performing on the subway, and dealing drugs on the street should be a concern, but the police are not the best, most cost-effective way to deal with these problems. We spend hundreds of millions of dollars a year on a revolving door criminal justice system that leaves most people worse off. Eric Garner had 30 previous contacts with the police and it did nothing to improve his life situation. The mayor's top criminal justice advisors know that we need to develop alternatives, but aggressive, invasive, and expensive policing is standing in the way.

This profoundly conservative view of the Broken Windows theory seems fundamentally at odds with the program put forth by the new mayor. De Blasio's goals are optimistic about the ability of government to make a positive impact on the lives of the poor. His educational programs are designed to provide developmental and social supports to help young people lead stable and productive lives without relying on constant police vigilance. It's time for the mayor to dial back "quality of life" policing and continue to invest in the lives of young people and the communities they live in, rather than relying on mass criminalization. He can't have it both ways.

***
Alex S. Vitale is associate professor of sociology at Brooklyn College and author of City of Disorder: How the Quality of Life Campaign Transformed New York Politics. You can follow him on Twitter at @avitale.
***