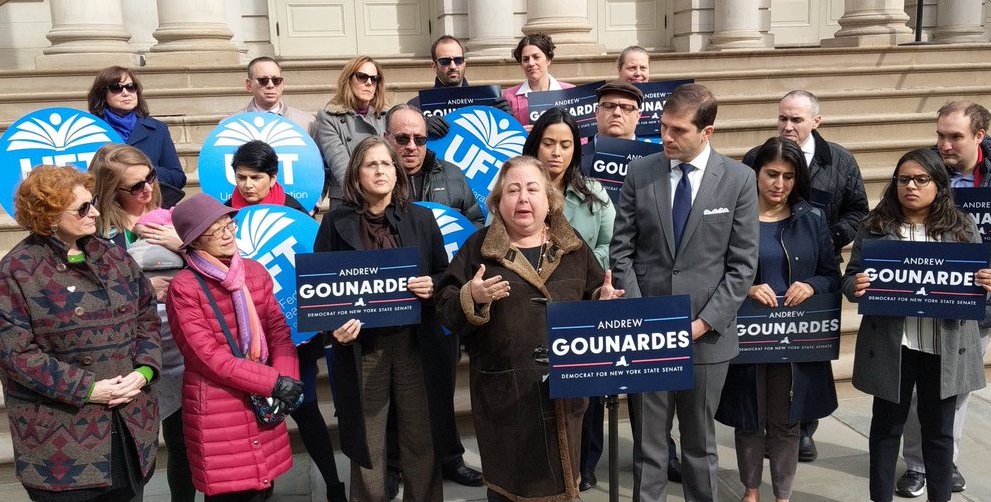 The slumbering Democratic midterm electorate awakened this year, in New York and around the nation, and won significant victories. Across the country, the sum of the votes of the Democrats for every House of Representatives race in the nation is 60.1 million and counting. In 2014 only 35.6 million voted Democratic.

While Democrats are celebrating their booming turnout and major wins including flipping control of the House of Representatives, there’s a big question Democrats need to ponder: can they sustain and even grow this kind of voter turnout in 2020 and hold onto many razor-thin wins of these midterms? Will the Democrats stay motivated?

First, let’s look at some key numbers nationwide and in New York:

In 2018 the Democrats have gained more than 24 million more votes for the House Democratic candidates than in 2014 (this is called the National House Popular Vote), 67% more than the past midterm election. The Republican House Popular Vote this year is 50.7 million and counting, compared to 40.1 million in 2014, a gain of an extra 10.6 million, 26% over the prior midterm. The Democrats flipped 40 seats in the 435-seat House and took the majority, and there is still one race in California uncalled, according to the Cook Political Report.

In New York, Governor Cuomo and the statewide Democratic ticket won an overwhelming victory. Compare the election night results by region on New York's gubernatorial line in 2018 with those same regional results in 2014: 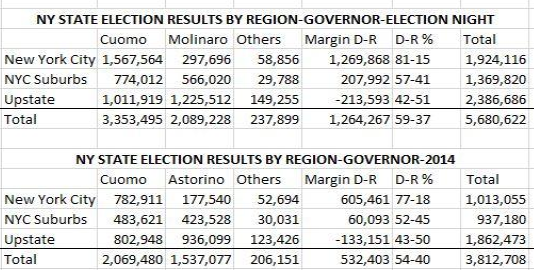 Long Island Wins for Democrats
A look at the results on the Governor's line and the six seats won by Democrats, including two incumbents, on Long Island:

Republicans lost four State Senate seats on Long Island and have been wiped out in Nassau County. Just four years ago they held all nine Long Island seats; when the Democrats take control in January, the Republicans will hold three. Their troubles began with the corruption conviction of former Senate Majority Leader Dean Skelos; his seat was won by a Democratic Assembly member and former federal prosecutor, Todd Kaminsky, in a special election held the same day as the New York presidential primary in April 2016. Another Democrat, John Brooks, won a second Long Island Senate seat in November 2016 by 314 votes. This year Kaminsky won handily and Brooks won over 54%. In the four new victories the Democratic candidates had two 10,000-vote wins. The other two victories were close, however, one by 2,500 votes and the other by 1,400.

Hudson Valley Wins for Democrats
A look at the results on the Governor's line and the three Senate seats in the Hudson Valley where the Democrats won, by county in the northern suburbs of New York City and the upper Hudson Valley:

The Democrats won three Republican seats in the Hudson Valley. Democratic Assemblymember Jim Skoufis, who won his Assembly seat in 2012 at the age of 25, ran for the seat vacated by retiring Republican Bill Larkin and won by 6,700 votes, with nearly 54%. He won in Orange County by more than 4,000 votes and in Rockland County by 3,000 votes. Democrat Jen Metzger won the seat held by retiring Republican John Bonacic by a slim 2,500 votes, 51%-49%. She won Ulster County by 5,000 votes and lost Orange County by only 61 votes, 23,708 to 23, 647. Both Skoufis and Metzger likely ran ahead of Cuomo in Orange County, but his wins in Ulster and Rockland surely helped their campaigns.

Democrat Peter Harckham won the third seat in the Hudson Valley in another close race, defeating Republican incumbent Terence Murphy by 2,100 votes, 51%-49%. Harckham lost in both Putnam and Dutchess Counties, as did Cuomo, but he won solidly in Westchester, where most of the district is located, by 10,000 votes. Cuomo won Westchester County two-to-one. Democrats are celebrating their wins in the Hudson Valley, but two of the three wins were very tight.

Congressional Wins for Democrats
Below is a look at the results of the three Congressional wins in New York for the Democrats. The two upstate victories, in the 19th and 22nd Congressional districts, occurred entirely outside the New York City suburbs:

In the two upstate districts, the Democratic candidates ran ahead of Governor Cuomo, and needed to do so to win. In the 19th Congressional district, Democrat Antonio Delgado defeated incumbent Republican John Faso by over 7,500 votes. But in Ulster County he won by 16,000 votes, 43,000 to 27,000, while Cuomo's margin in Ulster was 6,000 (the Governor won there 37,000 to 31,000). Delgado also won by small margins in traditionally Republican Columbia and Dutchess County, while Cuomo lost there by slim margins. Faso defeated Delgado further north, in Rensselaer County and the Catskills, where Cuomo did not do well.

In Central New York, Democratic Assemblymember Anthony Brindisi overcame many challenges to win a very close race against incumbent Republican Claudia Tenney. Despite a 30,000 voter registration edge for the Republicans and polls showing majority approval of Trump in the district, Brindisi won by slightly more than 1%, 122,000 to 119.000. Nearly all the absentee ballots have been counted there. Brindisi won his home base in Oneida County 38,000 to 37,000, and won Broome County, where the City of Binghamton is located, by 8,000 votes. He managed to stay close to Tenney in other heavily Republican counties. Here's a comparison of the Cuomo-Molinaro race with the Brindisi-Tenney race in counties overlapping with the 22nd Congressional District. The results demonstrate how competitive Brindisi was in Republican turf.

In the Democratic part of Staten Island, the North Shore, Rose won the Assembly district there by 16,000 votes, a margin Republicans were unable to overcome in the rest of Staten Island. Rose had more than double the vote of the Democratic candidate for the seat in 2014, 95,000 vs. 45,000. In the State Senate race, the Democratic candidate, Andrew Gounardes, defeated Senator Golden by just over 1,000 votes, another close election. Gournardes and Rose benefited from the energy and synergy of running in the somewhat overlapping sections of the Congressional and State Senate districts.

Keeping the Seats
2020 will be a big challenge for Democrats to hold the victories in New York and the nation. Many of the State Senate and Congressional wins were very close. Republicans in New York and the rest of the country will make intense efforts to recover during the presidential election, when turnout will be higher and President Trump will likely be on the ballot. Of course, Republicans have the repudiation of President Trump to blame for their losses this year. Exit polls also showed Democrats won the 18-29 age group by 35 points, a very encouraging long-term sign for Democrats. Nonetheless, the Republicans will be highly competitive in most, if not all, of these districts and the Democrats can take nothing for granted.