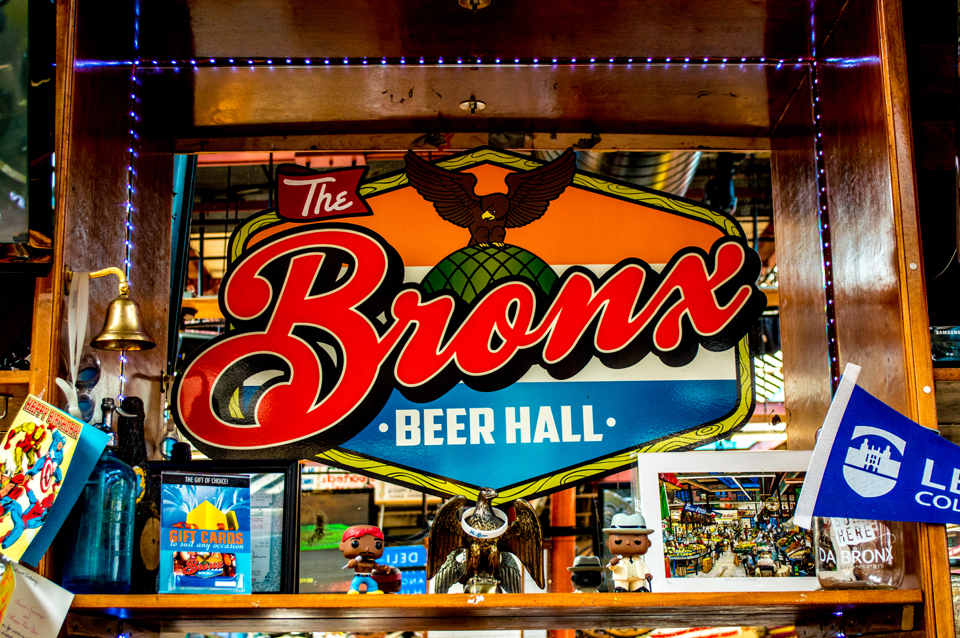 The following entry is part of The Small Business Corner, a collaboration between Gotham Gazette and GoBizNYC:

Recently, GoBizNYC met with Bronxites Anthony Ramirez II, Paul Ramirez, and John Martin to discuss their experience starting up The Bronx Beer Hall. Located in the historic Arthur Avenue Retail Market, The Bronx Beer Hall was founded in February 2013 and has since become an indelible part of the community. Anthony and John are serial entrepreneurs — in 2006, they founded Mainland Media, a company that sells Bronx-themed merchandise designed by local artists.

The team's ongoing mission is to find success while promoting the Bronx and it has earned tremendous local support. In the early stages of starting their business, however, the three had a tough time identifying information about what was required of New York small business owners to satisfy government regulations. To its credit, the City does provide resources about business regulations through the NYC Business internet portal as well as the NYC Business Solutions and NYC Business Acceleration services. New Small Business Services Commissioner Maria Torres-Springer has outlined her vision for helping small business owners and budding entrepreneurs.

The Bronx Beer Hall founders discovered, though, that every business faces unique challenges and becoming a fully compliant owner and employer can be a process of trial and error. Their experience is informative of what many small business owners go through in attempting to realize their goals. The following are excerpts from our conversation.

Why a beer hall? Why the Bronx?

Beer halls are inherently communal spaces. There are about 130 beer halls across the five boroughs now, but just one in the Bronx when we opened. But this is not just a beer hall. It's not just a bar. It's a celebration of the community. Everything we sell is locally brewed within New York State, if not in the Bronx. And our food is sourced from within the market or within the neighborhood, so we're supportive of other local businesses as well.

What were the biggest challenges of starting up your business? How did you overcome these challenges?

It's not as easy as saying you're a business and that's it. It's not just shaking hands. You have to do your research. There are government regulations to comply with. There are taxes to pay. There is paperwork to file and legal entities to form.

When it came down to the beer hall itself, we had to learn all the little intricate things you never think about. We've all gone to bars. I know how to order a drink very well. But I didn't know anything about health codes, inspections, or liquor licenses. None of us had actually owned a bar before. I know for a fact that if we opened a bar again, we'd do things differently.

Did you have any guidance during this process?

We hired a lawyer who claimed he had experience in helping restaurants and bars open and had been doing this forever. Turns out we should've hired a different lawyer. He was very quick to make promises, saying: "I can get you this, easy!" or "Yeah, I'll get you a liquor license in two weeks!" No one can get a liquor license in two weeks. It's going to take several months. Don't tell me two weeks. If I plan on opening a bar in November, I now have to wait until February. You're paying for these kinds of things and there's just no way of knowing if you're working with someone who really knows what they're doing.

We've since learned that there are many things we could've easily done on our own without having to pay somebody else to do it. Lots of people try to take advantage of you because you don't know what you're doing. But in this day and age, often you can just go online and file a form. You don't need to pay somebody $400 to do it. We just didn't know it at the time.

What has been your experience in dealing with government regulations? What could the government do to better support businesses like yours?

At the beginning, we had no idea we had to pay our taxes quarterly, which was a problem. Reminder notifications definitely would've been nice. The only notifications we ever got were late ones saying: 'You didn't pay your sales tax. Now we're going to fine you and you have to pay your sales tax.' And we're like, 'Our company only has $1,000. I hope we still have a company after we pay the fine.' But the thing is, we were collecting the sales tax. We just didn't know when to pay it.

And it wasn't clear what we were required to do when we had staff. Now we know more, but at the time, we were writing out checks by hand. I remember, for the first two or three weeks, we weren't taking out enough taxes. Our staff was getting overpaid and we owed the government X amount of money.

Those were the early days. Those sorts of things were trial and error for us. But we got better at all of it. I know it's easy to say and hard to do, but if there was a "You're starting a restaurant or bar in New York City! This is what you need to be aware of" guide, that would've been very helpful.

Have you worked with the City's Department of Small Business Services (SBS) at all? They provide such a guide along with other resources.

When we were starting Mainland Media, we reached out to SBS, but it was too difficult for us to meet with them. So we ended up doing everything on our own, which is what we're used to doing. Honestly, I didn't even think to go back to SBS when we were starting up the beer hall more recently. It didn't even occur to us that those services were around.

Any final reflections on your experience of starting up The Bronx Beer Hall?

We've been active in the Bronx and in the community for awhile, so we had a lot of people we could reach out to for help. But if we didn't already have a strong support system and experience building a business with Mainland Media, we would've been lost. So, if you're someone with a great idea in the Bronx or New York without that kind of support system, I don't see how you would be able to cut it.

To make or discuss a submission for The Small Business Corner:

Reach GoBizNYC Director Victor Wong at This email address is being protected from spambots. You need JavaScript enabled to view it.

Reach Gotham Gazette Executive Editor Ben Max at This email address is being protected from spambots. You need JavaScript enabled to view it.

The Small Business Corner is a bi-weekly column featuring the opinions and perspectives of small business owners and advocates from the GoBizNYC network on the range of issues that concern the city's small businesses.

To all New York City small business owners and advocates: we hope this new platform, The Small Business Corner, will better enable you to engage in the local policy conversation and we look to you to support us in this endeavor by sharing your thoughts, experiences, and voices. To learn more about how you can be a part of GoBizNYC and participate in this effort, visit GoBizNYC.org.