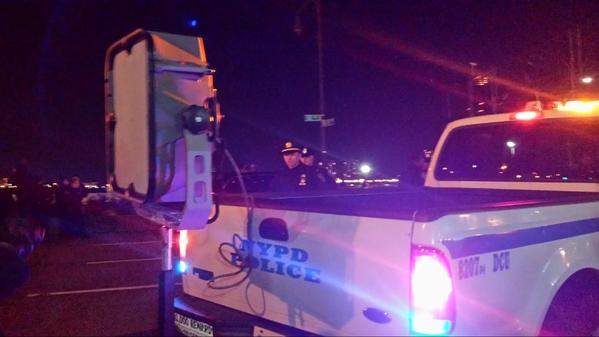 An LRAD being used by NYPD on Dec 3 (photo: @PeoplesHistory)

While the protests following the non-indictments in Ferguson and Staten Island have been disruptive, they have been mostly non-violent and clashes with police have been minimal, with the notable exception of the injury of two NYPD officers on the Brooklyn Bridge on the night of December 13.

However, on December 5 officers attempted to disperse a small march in Midtown using a new tool in crowd management, a long range acoustic device (LRAD).

LRADs have two primary functions: first as a long range communication device and second as a dispersal tool, emitting penetrating and piercing tones at high decibels.

LRADs were developed for the military following the terrorist attack on the USS Cole in October 2000 in Yemen. The purpose of the device was to ward off potential attackers before they could get close enough to an intended target to strike. The device has also been used at military checkpoints to communicate with and deter threatening vehicles.

The use of LRADs as a speaker may have some justification in crowd control. Best policing practices call for enhanced communication between demonstrators and the police. While this should be done face to face and on the ground as much as possible, there are situations where the police should notify crowds of their risk of arrest or of being subjected to use of force. Such crowds should be told where to disperse to and how. LRADs might be able to help with this since they can be heard over the shouts of crowds, unlike many conventional sound systems. However, we don't really know what if any harmful effects this function might produce, especially for people with existing hearing problems.

The dispersal function is similar to tear gas or water cannons. It is intended to be a less lethal use of force that can be used as an alternative to baton charges or other more extreme measures. Their use might be appropriate in dealing with a violent crowd attempting to storm the UN or other location where force might be necessary to prevent property destruction or injury. The effect, however, is usually rather crude. Like with tear gas, flash bang grenades, and riot control projectiles, the dispersal brought about by LRADs generally is disorderly and can lead to collateral property destruction and injury to onlookers and innocent by-standers. They should be used only as a last resort, in place of relying on higher levels of force.

The question of whether an LRAD is preferable to tear gas, projectiles, or flash bangs depends on balancing effectiveness in reducing violence and property destruction versus potential injury to protesters and onlookers. The problem is that we don't have very good evidence about the potential harmful effects of this relatively new and untested technology. There have been reports of related injuries leading to a legal settlement from LRAD use in Pittsburgh in 2009 and a ministerial report in Canada raised significant concerns about their health effects.

If we knew for sure that the dispersal function had no long term health consequences, then it might be preferable. If, however, there is a risk that those with existing hearing problems, and even others might experience medium to long term problems, or if psychological or cognitive functions are disrupted, then the costs may be too high. In the absence of clear evidence we should err on the side of caution.

One of my major concerns is that like with tasers and much military hardware, there is strong temptation for "mission creep." Often these devices are obtained under the pretext of very restricted uses in extreme and highly unlikely circumstances such as terrorist attacks or snipers. However, once departments have them, there is a tendency to use them in additional ways that make life easier for police but endanger the public.

Tasers can be life savers, but they can also be torture devices when used improperly. LRADs have this potential and we saw something like this when they were used during the Garner protests in New York. A few individuals in a larger group threw some things and the police used the dispersal function against the whole group on a Midtown street with no real plan for managing their dispersal. Other less dangerous methods could have been used and the effect on an already dispersed group was just to splinter them, making it harder for police to track them and leaving open the opportunity for random property destruction. Generally, this technology should not be used on a few troublemakers in an otherwise peaceful protest and it should not be used on more broadly violent crowds unless there are limited alternatives and a plan for managing an angry and disorganized splintering of the group.

Last week a group of lawyers sent a letter to the NYPD asking them to clarify their policies about the use of this technology. So far there has been no official response. There needs to be much greater transparency about the plans to use such intensive riot control tools. In fact, the NYPD also owns water cannons, and there has been no public discussion of their appropriate use either. It's time for the City Council to step in and hold hearings about the proper uses of riot control equipment in the New York.