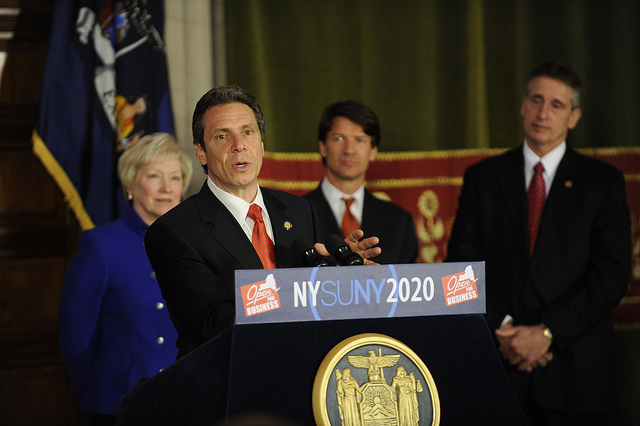 Cuomo & SUNY 2020 (photo via The Governor's Office on flickr)

In the height of political chaos across the country, New Yorkers have much to be proud of: our state recently increased the minimum wage and signed paid family leave into law in this year's budget, major contributions toward shared prosperity for all. This is certainly in large part because of Governor Cuomo’s strong leadership.

However, this year’s higher education budget is a mixed bag for New Yorkers, leaving many unfinished items on the table and a trail of uncertainty for years to come.

Governor Cuomo has positioned himself as a hero, the leader who saved our state from political gridlock and dysfunction and delivered for New York families and students. But let’s set the record straight - after the governor introduced his proposed budget in January, it was our students who organized and fought back and our Legislature that held the line against the governor’s unnecessarily austere higher education budget.

We should all celebrate the victories we achieved this budget cycle. Among them are a one-year tuition freeze at SUNY and CUNY, which comes after five years of annual $300 tuition hikes. We also achieved an increase in funding for the state’s educational opportunity programs and for full-time students at our community colleges. Advocates also successfully blocked Governor Cuomo’s planned $485 million state disinvestment to CUNY -- a third of the operating budgets for CUNY’s senior colleges.

Yet, when it comes to ensuring that New York puts higher education access and quality first, these successes are incremental at best.

The state has used tuition dollars to fill funding gaps by raising tuition, thereby shifting the cost to New York families for years. This is part of the governor’s SUNY 2020 Rational Tuition Policy, scheduling annual tuition hikes of $300, totaling $1,500 over five years, which expires at the end of this academic year. How a $1,500 increase could be considered “rational” policy is beyond comprehension.

Furthermore, it’s concerning that the FY 2017 budget did not provide the roughly $100 million to SUNY and CUNY that would have come from continued tuition increases, which after years of disinvestment further starves the universities and threatens their ability to ensure quality, affordable education for New York students.

A one-year freeze should be the first step to rolling back these hikes and strengthening state investment in public higher education.

All of this has taken place as the state’s Tuition Assistance Program (TAP), the key tool to help families pay for college, remains grossly out of date. In fact, the governor’s pervasive funding cuts have created a shortfall for the first time in the program’s 40-year history. What’s worse, the program currently requires that, when a student qualifies for it, SUNY and CUNY must use their operating budget to make up the funding difference between the maximum TAP award and tuition, taking away resources to provide other support services.

This also leaves hundreds of thousands of New Yorkers to fill on their own the gaps that TAP used to cover. Currently, the maximum TAP award is stuck at $5,165 while tuition at CUNY is $6,330 and at SUNY is $6,470, creating a gap of more than $1,100 depending on where you go. This is estimated to cost CUNY $50 million in the next year alone.

The state needs to increase and index the maximum TAP award with tuition and make the structural changes necessary to ensure true access for all New York students. This includes opening TAP up to part-time and undocumented students.

Another broken promise is New York’s funding commitment made through the SUNY 2020 plan, which required the state to provide SUNY and CUNY baseline funding levels that would also cover mandatory cost increases, also known as Maintenance of Effort (MOE). Late last year, Governor Cuomo vetoed a MOE bill, which passed through the Legislature with bipartisan support, saying it’s a budget issue. The governor neglected to include it in this year’s executive budget, and it wasn’t included in the final budget deal either, continuing to cost the universities money that could go to lowering tuition, restoring classes cut in tough budget times, and providing support services to students.

The state’s budget deal also comes at the immediate expense of the CUNY faculty, members of which haven’t had a pay raise or contract in nearly six years, threatening CUNY’s ability to attract and keep the talent necessary to provide a competitive and high-quality education in a 21st century economy. Funding for a final contract deal should be reached before the state legislative session ends in June.

With New York’s $147 billion budget and GDP of $1.4 trillion – as much as the country of Spain – our state higher education system should be leading the nation. And it certainly shouldn’t disguise disinvestment as short-term freezes and temporary fixes, particularly when it comes to quality, affordable postsecondary opportunities.

How the governor and the state Legislature address the unfinished business outlined above over the course of this session, and the session following the November elections, will be the true test of how our leaders and lawmakers value access and opportunity at the people’s university.

***
Kevin Stump is Northeast Director of Young Invincibles. YI sits on the Steering Committee of the CUNY Rising Alliance.
OnTwitter @KevinStump and @YoungInvincible.