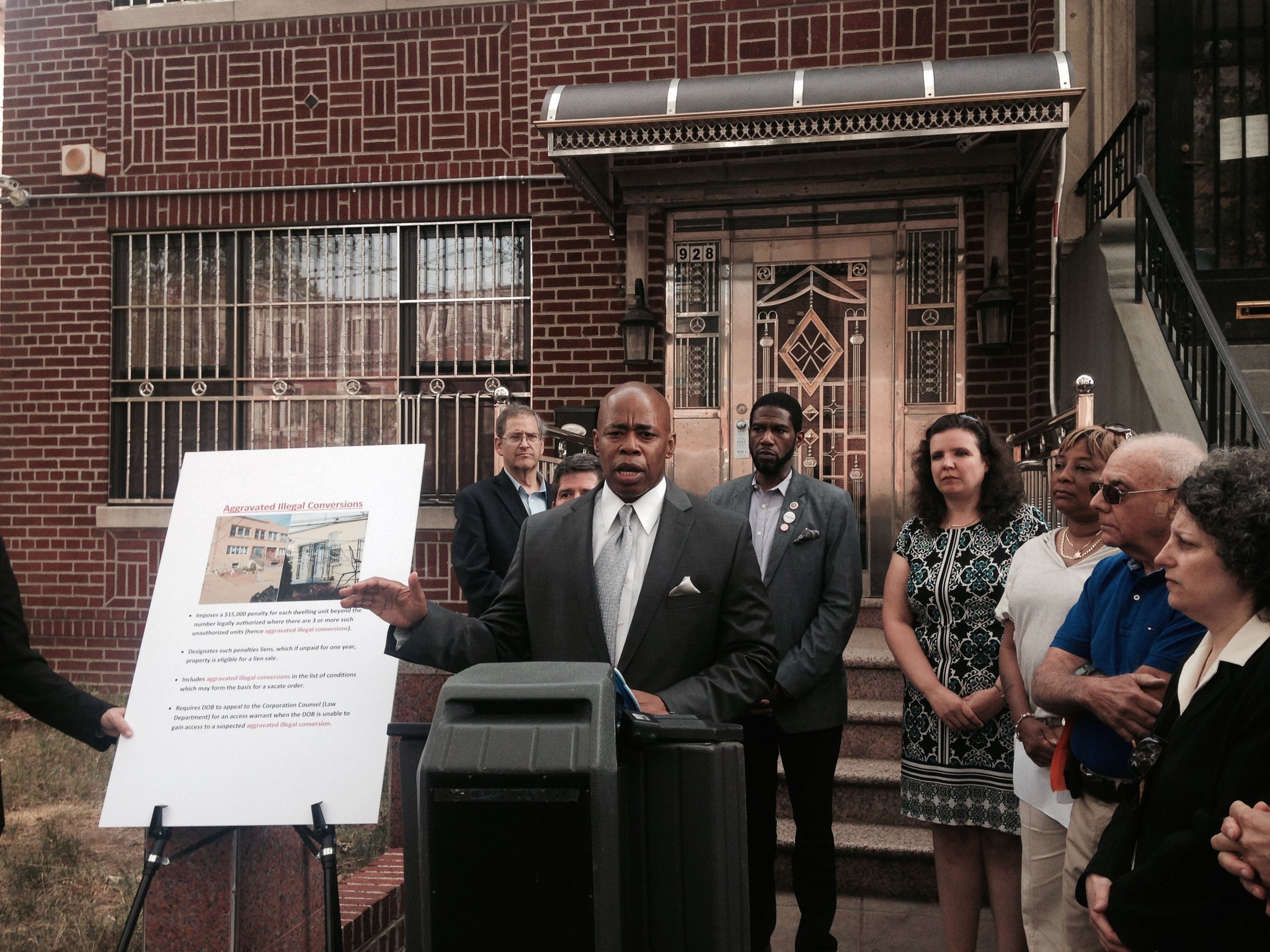 Communities like what we have in Brooklyn represent the future of the United States — vibrant places where people from around the world come to achieve their ambitions.

After many years in which many of our great cities declined in stature, young professionals and couples now want to build their careers and start families in urban America, and older adults want to enjoy their golden years in cities as well. I often say that there are only two kinds of people in the world: those who live in Brooklyn and those who wish they could. The numbers bear that out: our borough now has its highest population in history, representing what would be the fourth-largest city in the country — standing apart from the rest of New York City — with more than 2.6 million residents and growing.

As every teenager experiences a few growing pains, the rapid growth of cities from coast to coast has created some challenges. Many families that have lived in Brooklyn for generations now fear that their income will not support a middle-class life, with rents in some neighborhoods increasing by double digit percentages every year. Our subway platforms have become a crush of elbows and shoulders as commuters struggle to pack themselves into trains during rush hour. And even as crime has declined in New York City, the safest big city in America, there are communities where violence is a persistent threat, where parents are afraid to let their children play outside and the sound of gunshots still punctuates the dark of night.

The Republican National Convention came to a close in Cleveland with nary a word on the fundamental concerns of cities. While the Democratic National Convention in Philadelphia touched on some of these matters through the party platform, we need to ask — better yet, demand — that leaders in both parties go deeper in reflecting on the problems of cities and offering solutions that will allow this country to remain preeminent in an era of continued urbanization. The federal government has the capacity and the duty to step up with this critical assistance, and should do so in the following areas:

Transportation
Every day, commuters living in the greatest city in the world enter subway stations that are more than a century old to crowd into trains that have been in service for decades, some since 1964. Most subway lines still lack countdown clocks. People riding city buses travel at an average rate of 7 MPH (about jogging speed). Our parkways resemble parking lots.

The federal government just adopted a five-year, $305 billion transportation plan known as the FAST Act. Unfortunately, this bill spends nearly 80 percent of its funds on roads with the remainder devoted to mass transit. This allocation fails to account for either the needs of urban commuters who depend on subways, buses, and ferries, or the declining percentage of people throughout the United States who travel by car. A more flexible program that allows individual states to focus their resources on the areas of greatest need would provide New York and other cities with additional resources to build modern mass transit systems.

The federal government must establish a long-term source of revenue for the Highway Trust Fund, which now remains in operation only as a result of gimmicks in the budget that will expire in a few years. Many mass transit projects require several years (or even decades) to complete. A guaranteed investment would eliminate the uncertainty that now exists, which prevents cities and states from developing regional transportation plans to prepare for the needs of future generations.

In addition, commuters should have more flexibility with their transit tax benefits, which allow for pre-tax payments for commuter rail, subway, buses, and parking. There are many people who drive their car to a subway station, then ride the train to work, or alternate on different days, and who should have the option of allocating their payments as desired. Commuters who travel by bicycle also deserve to have the full monthly benefit of the program ($250 rather than $20).

Affordable Housing
The rapid gentrification of New York City has contributed to an affordable housing crisis in which more than half of the families who rent their homes are considered “rent-burdened,” paying more than one-third of their income in rent. There are almost 60,000 people sleeping in homeless shelters each night in New York City — the most since the Great Depression — and many more families living in substandard apartments.

Yet most federal spending on housing primarily benefits high-income homeowners in suburban areas, with the mortgage interest deduction, the property tax deduction, and the partial exclusion of capital gains from the sale of a home. None of these investments are necessarily unwise, but the federal government should consider the two-thirds of New York City residents who rent their homes, the rising number of senior citizens with low to very low incomes, and the increasing number of young people who are renting nationwide. If we are serious about addressing homelessness and the societal challenges that rising housing costs pose to urban America, then Washington’s priorities need to reflect real reform.

It is well past time for the federal government to restore and expand funds to the critical Section 8 rental subsidy. In New York City, the program has not been accepting new applications since 2009, resulting in a scramble for those in need to benefit from the “recycling” of vouchers and forcing many participants to relocate to small apartments that often require a parent and child or unrelated members of a household to share a bedroom. Beyond Section 8 and Section 202 (designated for affordable senior housing), our city’s public housing residents depend on adequate funding to keep their developments maintained to a livable standard. The Rental Assistance Demonstration (RAD) initiative has allowed agencies like NYCHA to leverage their debt and equity for reinvestment in their capital renovations, and it will be up to the next administration to advance this forward.

Going further, we need to jumpstart efforts that would connect the Low-Income Housing Tax Credit to more households through the income averaging reform bill currently stalled in Congress, a measure that would bring needed flexibility to a housing market like New York City’s as well as vital financial resources to keep roofs over the heads of hard-working families without crippling rent burdens.

We also need a Justice Department that actively prosecutes housing discrimination, which has contributed to the crisis. This includes combating rampant tenant harassment by unscrupulous landlords looking to game the system. Some zoning regulations effectively prevent the development of affordable housing that would allow a diverse community to flourish, and the federal government should consider the disparate impact of these restrictions. DOJ should additionally work to prevent discrimination in mortgage lending — in which people of color are offered loans with higher interest rates — that has contributed to many foreclosures.

Gun Violence
The deadly consequences of gun violence continue to threaten families and children in Brooklyn. In neighborhoods such as Brownsville and East New York, homicides and other violent crimes are still disproportionately high. Other cities such as Baltimore and Chicago have, this year, experienced substantial increases in violent crime, which threatens the public safety.

The tide of violence has been swelled by a flood of illegal guns into New York City, which (with New York State), has some of the most restrictive laws in the nation, preventing individuals who present a threat to themselves or other people from owning handguns. Most of the guns used in violent crimes in New York City were purchased in other states and illegally trafficked here, through an “Iron Pipeline” that stretches from Georgia to Virginia and other states that allow gun sales even without identification. Chicago has a similar problem with guns sold in Indiana.

We need common sense reform that only the federal government can provide. Cities are depending on Congress to prohibit gun traffickers from buying large quantities of guns and ammunition to sell in our streets, as well as to institute universal background checks that would prevent criminals from entering the arms trade. Moreover, we need dedicated federal prosecutors who will work with local district attorneys and law enforcement agencies to end the epidemic of gun violence, as well as the ability for the Consumer Product Safety Commission to require that guns include safety features to prevent accidents or unauthorized uses.

According to the most recent Census, more than 80 percent of Americans live in urban areas, a figure that is continuing to climb upward. As the importance of cities grows, so does the need for a proper debate between leaders of the major political parties about the best way to address the challenges facing urban America and the possibilities that exist when the federal government works in cooperation with its municipal partners.